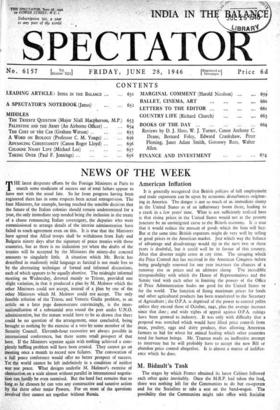 The stages by which France obtained its latest Cabinet followed each other quite inevitably. Once the M.R.P. had taken the lead, there was nothing left for the Communists to do...

NEWS OF THE WEEK HE latest desperate efforts by the

Foreign Ministers at Paris to snatch some modicum of success out of total failure appear to have met with the usual fate. So far from progress having been registered there.has...

• It is generally recognised that British policies of full employment and trade expansion can be upset by economic disturbances originat- ing in America. The danger is not so...

The Government has been well-advised to appoint a Royal Com- mission, under the chairmanship of Lord Du Parcq, to consider the position of Justices of the Peace, and the terms...

The time has come to raise the sights for exports. The official objective of exports valued at L750,000,000 in the whole year 1946 seems likely to be attained by October, and if...

While the Foreign Ministers in Paris face deadlock on the subject of a treaty with Italy, the Italian Constituent Assembly is meeting in Rome to draft a constitution for the new...

Scrutiny of the B.B.C.

The only really surprising thing about the recent resolution for a Joint Select Committee of both Houses to consider the renewal of the Charter of the B.B.C. was that it did not...

INDIA IN THE BALANCE

T HE news that the Indian National' Congress has rejected the invitation to join an interim government, but has accepted the British Cabinet Mission's proposals for the election...

Sampling a new dictionary is a perplexing business. How should

its merits be judged? Mainly, I think, by opening it at random. You get that way a fair test of the claims made in the preface or blurb—and also sometimes by chance a...

Sir Charles Oman was a great Oxford institution. To military

historians, to generations of schoolboys and to those who had felt anything of the power and fascination of Victorian Oxford, he was a writer of great books. To Qxford men—all...

The tribute paid to British Information Services in the United

States by Mr. Charles Ferguson, one of the editors of the Reader's Digest in a letter to The Times on Monday is important evidence, for it registers the appreciation of serious...

2 S NOTEBOOK , N OTHING can excuse, and nothing but the Government's craze for doctrinal legislatiori can explain, the pace at which the- House of Commons is being driven in...

The question' of the Southern Tyrol has found the feelings

of the House of Commons constant over a period of twenty-seven years. Nothing caused more concern and indignation in 1919 than the allocation of this purely Austrian-speaking...

By MAJOR NIALL MACPHERSON, M.P. N the recent Foreign Affairs Debate in the House of Commons I the Trieste question was completely overshadowed by the problem of Germany. Mr....

PALESTINE AND THE ARMY

By AN AIRBORNE OFFICER [This article, which came unsolicited, was received before the perpetration of the recent outrages in Palestine. It represents a point of view which...

A WORD ON BIOLOGY

By PROFESSOR C. M. YONGE T HE war, we realise, was won by science ; the peace likewise may be won by it or civilisation as we know it be obliterated by this same mastery over...

By CANON ROGER LLOYD I T would occur to very few of us to say that the years 1914 to 1945 constitute one of the greatest ages of the Christian faith. The legend of the...

By MICHAEL LEE M OST of the legal night-life of Cologne goes on found the cathedral. There are Bunker which serve the Deutzerbahnhof and other stations, but the Hauptbahnhof...

By PAUL F. JENNINGS I T is our first week with our new company, and we are engaged in taking over the barracks for it.. This is more complicated than it sounds, because taking...

By HAROLD NICOLSON I N Oxford Street, almost midway between Oxford Circus and the. Tottenham Court Road, the Information section of our Control Commission in Germany, have...

Tint same unclouded sky and murmuring sea, The dappled shade beneath thewind-bent tree— Just one short year ago since he Was here with me : My friend, Who came to share a summer...

The New Monte Carlo Ballet. At the Cambridge Theatre. THE reappearance of Serge Lifar as a dancer in London gave most interest to the new ballets presented by the Ne,w Monte...

From Delacroix to Dufy. At the Lefevre. Daumier Lithographs. At the St. George's.—Mary Potter. At Tooth's—Collection of the late Sir William Rothenstein. At the Leicester. AT...

" Easy to Wed." At the Empire.—" Frenzy." At the Academy. Easy to Wed is a new version of an almost legendary film called Libelled Lady. The story was always rather a feeble...

• Tim SPECTATOR, • printed on thin Bible paper and weighing under ore ounce, can now be sent by air mail to civilians any- where in Europe (except Germany) for £2 75. 6d. per...

Sta,—The Rev. Edward M. Norfolk, in The Spectator of June

14th, writes of the Latin rite having " served Christendom for close on a thousand years." This would have been a true statement had he inserted the woad Western before...

SIR, -It is obvious that the problem of finding useful work for ex-Service- men, who have successfully held responsible staff or other appointments during the past six years, is...

Sut,—The origin of Mr. Newhouse's difficulty seems w be that while I myself was working on the agricultural population, " engaged directly in agriculture," he has included a "...

SIR, —In his comments, in your issue of June f4th, on the article A Great Whitsunday, Mr. E M. Norfolk raises, in effecf, three points. One is the intelligibility of English to...

SIR,— Agreeing most warmly, as I do, with Mr. Home's proposals (r) and (2) for Palestine in your current issue, I ask him on what grounds he bases (3). Why are the Arabs, who...

WAR DAMAGE CLAIMS • SIR, -It is not generally realised that Part II of the War Damage Act (1943) contains certain clauses which react unfairly towards those who lost personal...

SIR,—So far as I call" observe, no other journal in the country has com- mented to the effect that my denial was untrue in theonatter of the recent Government allegation...

SIR,—Johnson remarked that he considered himself a good-humoured man. Mr. Nicolson considers himself tolerant, but tolerance is not his strong suit. Did he not tell us once that...

Sm,—A curious diversity in policy is developing between the Board of Trade and the Ministry of Food. The former is trying to foster the idea that England is potentially...

one of the most singularly ill-informed commentaries that !I have ever read. Mr. Nicolson is entitled to feel enraged that philatelists should exist, just as I am entitled to...

SIR,—For months I have waited with 'growing impatience for the Press to take up cudgels on. behalf of the motoring community in this matter of petrol-rationing, and it was...

The Ghost of a Forest Weather of this kind makes

one more than normally conscious of the trees. Wandering about along the southern ridge of the mid-Weald on the borders of Kent and Sussex, after reading some histories of the...

Tim abundance of showers this summer has given us a greener green to the grass and the foliage of the trees, a deeper colour to the miniature chandeliers of honeysuckle in the...

To pay such immense sums of money for tiny, unusable, frail, ugly and wholly meaningless objects seems to me to suggest a mind which is adhesive and small." The late Franklin D....

Sin,—Licences for some 87o,000 tons of cereals for brewing and distilling go on, in spite of possible bread-rationing and the drastic cuts in feeding- stuffs for poultry, cattle...

Sin,—There is inevitably a general shortage of recent books in English in the universities of Europe today, but it seems from recent evidence and my own observations that the...

Another feature of the wet summer is the variety of fungi already sporing in field and hedge, and even on the disgusted gardener's lawn. Last week in the meadows of Oxford I...

Sit,—The death of John Logic Baird means that we have lost perhaps the greatest, though certainly the least publicised, scientist of our time. It was a great disappointment to...

I gave some warning last week of impending disaster in the soft-fruit garden. The worst of my fears has been realised. The dreaded goose- berry mildew, having got a firm hold...

The Burmese AMONG the virtues of Dr. Hall's book is timeliness ; there are many people who want to know more about Burma. Nevertheless, it would be wrong to expect anything...

• The Genius of Wilde

Oscar Wilde. By Hesketh Pearson. (Methuen. 16s.) THIS is a very good book. It really does give a portrait of Oscar Wilde which is novel, well-balanced and free from hysteria of...

The Man of Action

"General de Gaglle. Morceaux Choisis." Arranges par Jean Gaulmier. (H‘gchin . son. 7s. 6d.) THE man who recently said, " I am not suited to deal with petty squalls, but with...

Bishop Henson Discourses A Bow( by Dr. Henson is always

welcome. Whatever its theme, the reader can be sure of finding in it pungent thought phrased in orotund and reverberating English. There will be shrewd comments on men and...

The Heart of Arabia

Arabia Phoenix. By Gerald de Gaury. (Harrap. 10s. 6d.) Tats is an ,account pf a journey made by the author in.1935, when he accompanied Sir Andrew Ryan, the first British...

Prelude to the Russian Campaign. By Grigoire Gafencu. (Frederick Muller. 18s.) Jr would be hard to find more salutary reading about the present state of Europe than this...

British Security. A Report by a Chatham House Study Group. (Royal Institute of International Affairs 8s. 6d.) A SERIOUS study of the problems of British security would serve a...

That Lady. By Kate O'Brien. (Heinemann. 9s. 6d.) THE heroine of Miss O'Brien's novel, the lady of the title, is Ana de Mendoza y de la Cerda, Princess of Eboli and Duchess of...

for one guinea will be awarded to the sender of the fi rst correct yoluttim of Mil week's crossword to be opened after noon on Tuesday week, yuly 9th. Envelopes must be received...

SOLUTION TO CROSSWORD No. 379

By CUSTOS - QNC:E again the market is giving the speculative investor a reminder that prices do not go up in a straight line. Admittedly, the latest setback has. not been of...