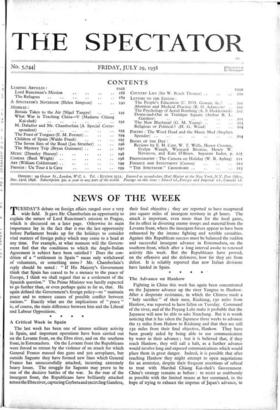 NEWS OF THE WEEK .

T UESDAY'S debate on foreign affairs ranged over a very wide field. It gave Mr. Chamberlain an opportunity to explain the nature of Lord Runciman's mission to Prague, which is...

A Critical Week in Spain The last week has been

one of intense military activity in Spain, and important operations have been carried out on the Levante front, on the Ebro river, and on the southern front, in-Estremadura. On...

The Advance on Hankow Fighting in China this week has

again been concentrated on the Japanese advance up the river Yangtze to Hankow. After a desperate resistance, in which the Chinese made a " holy sacrifice " of their men,...

The Anglo-American Trade Agreement It is unlikely that the hitch

in the Anglo-American track discussions, which has been reported recently, amount, to anything more than the temporary inability of the nego- tiators to resolve certain...

last week in raising the question of this country's debt to the United States in the debate on the Finance Bill in the. House of Lords. Even should his speech have no immediate...

Anarchy in Palestine Last Monday a bomb exploded in the

Arab market-place at Haifa, killing 45 Arabs and wounding 45 others. It started inter-racial fighting in which Jews were the principal sufferers. The incident unfortunately is...

who in the effort to restore order in Austria had sternly repressed both the Socialist rebels and the Nazi agitators, was murdered by a gang of Nazis. For this crime, committed...

Export Coal On the face of it there is much

to be said for the proposal put before the Government by mine-owners and mine-workers to impose a compulsory levy on all coal marketed, from the proceeds of which coal exports...

Racialism and Fascism The attraction of anti-semitic and " racialist

" theories for dictatorships is well illustrated by the official anti-semitic campaign which has opened in Italy. Even less than Germany has Italy any excuse for anti-semitism....

The custom of dividing the House on the outstanding Supply

votes was originated by the Conservative Opposition before the War. For several years now Opposition parties have refrained from demanding a division on every single vote and...

Only one slip did Mr. Chamberlain make. In his penultimate

sentence he remarked that " throughout the Continent there is a relaxation of that sense of tension which six months ago was present." Had he entirely forgotten the speech...

On this occasion it was the Liberal Opposition who had

called for the Foreign Office vote. They felt that most of the debates on foreign affairs during the session had been confined to single issues and that a general review of...

The Plight of Agriculture Much nonsense has been talked about

the Prime Minister's _ speech at Kettering, when he pointed out—what is obviously true—that it is out of the question for this country to attain self-sufficiency in food...

Safety in Mines The appalling waste of life on the

roads of this country has rightly been impressed on the public conscience with some insistence ; but far less has been heard of the annual toll. of life taken by the coal mines,...

Patent Medicines ' Lord Horder is to be congratulated on

raising the question of patent medicines in the House of Lords this week. Legis- lation on this subject has long been called for, but the Government seems to adopt the curious...

The Week in Parliament Our Parliamentary Correspondent writes : On

A T this critical moment in the affairs of Czecho- slovakia Mr. Chamberlain has done well to offer the services of an Englishman in the attempt to bridge the gulf which, if...

T HE Evian Conference convened by President Roose- velt has recently shown how much the problem of the refugees has impressed itself on the conscience of the civilised world....

L AST Saturday M. Pierre Cot, Lord Cecil, and other representatives of sane opinion throughout the world met to consider how the bombardment of open towns might be prevented and...

BRITAIN TAKES TO THE AIR

By NIGEL TANGYE F OR that oddity, an Under Secretary of State for Air who has spent a lifetime in aviation and who can really fly, may the Lord make us truly thankful. One of...

WHAT WAR IS TEACHING CHINA -V

By MADAME CHIANG KAI-SHEK [This is the fifth and last of a series of articles by the wife of the Chinese Commander - in - Chief in China today] T AM moved to wonder if there is...

THE FEAST OF TONGUES

By E. M. FORSTER " TT should be our faith that everything in this world .1. can be expressed in words," wrote Wilde. The gods heard his prayer, and ironically decreed that...

By WALDO FRANK T HE refugios of Barcelona, the once gay city of the Catalans, are shelters of transit, to which hundreds of thousands of the dispossessed from all the parts of...

THE SEVEN SINS OF THE ROAD

By JAN STRUTHER T HE highway is a microcosm, and a long journey by road is the epitome of a lifetime. This was true even in the days of horse-drawn vehicles, but today the...

By BRYAN GUINNESS T ES ; that's all very well," said Mr. Frogmarsh, " I know I'm lucky to live here at Puddleboume ; it is a lovely place : the woods are justly celebrated ;...

Strauss's New Opera THERE was a time when the production of a new opera by Richard Strauss was an event of world-wide interest. It was partly aroused by the sensationalism, that...

WAS this the face that launched a thousand sheiks—these bulging eyes, these lips pendulous and trembling with lust, these nostrils puffing like a stallion's ? 0 tempora, 0 mores...

AT the Victoria and Albert Museum there are on exhibition examples from Goya's four series of etchings The Fantasies, The Horrors of War,' The Proverbs, and La Tauromaquia,...

Weeds and Prairies The other day I met an inspector under the County Council, busy at the work of looking for noxious weeds on farm and other land. He found glaring examples of...

ABORTION AND MEDICAL PRACTICE [To the Editor of THE SPECTATOR]

SIR, —Although I deprecate the undue publicity this subject has received, there are points arising from - the recent case of it that are worthy of consideration. The public,...

LETTERS TO THE EDITOR [Correspondents are requested to keep their letters as brief as is reasonably possible. Tie most suitable length is that of one of our " News of the Week...

Sta,--In his article entitled " The Psychology of Bombing," published

in The Spectator on July t5th, Major-General J. F. C. Fuller seems to suggest that international law does not govern the conduct of nations during war ; yet, in point of fact, a...

Sia,—Mr. Mark Benney is a young man who writes With

authority and not as the scribes on the subjects on which he does write, and writes so prophetically well. He has the same respect for the Oxford Dictionary as I had in my youth...

GERMANY AND WORLD OPINION [To the Editor of THE SPECTATOR]

Snt,—There is a great deal to be said for the views of Mr. J. T. Dunn and Mr. H. H. Charnock that international understanding is going to suffer if we are eternally adopting a...

PROTECTING BRITISH SHIPS [To the Editor of THE SPECTATOR] Sta,—Politeness

demands I should acknowledge Miss Rathbone's elucidation of her charges against the Prime Minister which she now modifies by suggesting his delinquencies are unintentional....

LOW WAGES AND UNEMPLOYMENT [To the Editor of THE SPECTATOR]

Sta,—In The Spectator of July 22nd your Parliamentary cor- respondent very briefly outlined the recent debate in the House of Commons on the activities of the Unemployment...

THE NEW BLACKMAIL [To the Editor of THE SPECTATOR] SIR, —May

-I illustrate my recent letter by an example from The Thnes Literary Supplement, July 23rd, page 489 ? Herr the reviewer, having mentioned certain oddities in his author's...

THE LENGTH OF BOOKS [To the Editor of THE SPECTATOR]

Snt,—Your reviewer, Professor Bonamy Dobree, closes his Absalom Scott review with these words : " One would wish that Miss D'Oyley would now settle down to write a life of...

THE WORD DEAD AND THE MUSIC MAD

Tim word on the hill The music in the water— The music reflects The word on the guitar. When the guns spoke The fat poet fled Till he came to Lerida, Name peaceful as the...

[To the Editor of THE SPECTATOR] Snt,—I hope Mr. A. L. Rowse will continue the discussion of the large and complex issue raised by Sir Maurice Amos, since the matter has been...

DutEcr subscribers who are changing their addresses are asked to

notify THE SPECTATOR office BEFORE MIDDAY on MONDAY OF EACH WEEK. The name, the previous address to which the paper has been sent and receipt reference number should be quoted.

[To the Editor of THE SPECTATOR] Sta,—Monsieur Bayet's letter from Paris is timely. When are we going to face the truth in this country There is a tenseness beneath the surface...

THE MEDITERRANEAN IN POLITICS

BOOKS OF THE DAY By E. H. CARR MISS MONROE has performed a remarkable feat. She has produced a volume which is as lively as good journalism and as varied and colourful as a...

THE BOMBING OF CIVILIANS

The Public Services.: A Historical Survey. By W. Hardy Wickwar. (Cobden Sanderson. Los. 6d.) " THE history of these institutions," says the author in the opening chapter of his...

Chinese Crackers: Alleged Translations from the Chinese. By William Kean.

Seymour. (Boriswood. 5s.) AN ORIENTAL MIND IT is almost Impcissible for -an Englishinan to throw himself into the Oriental mind and become Eastern in his outlook upon life....

THE CAMERA ON HOLIDAY Photography

By W. R. AYLING MOST amateur photographers will take a camera with them when the time arrives for the annual break. Indeed for many the annual holiday marks the opening of the...

LONDON is still following Wall Street, but only at a discreet distance. This may be deliverance into the promised land, but there may be pitfalls in between and London is under-...

RHOKANA'S HIGH EARNINGS THE big Rhodesian copper-mining groups have many times shown their ability to produce on the basis of very low costs and to earn good profits in...

SOLUTION TO CROSSWORD No. 304

BY ZENO [A prize of a Book Token for one guinea will be given to the sender of the first correct solution of this week's crossword puzzle to be opened, Envelopes should be...