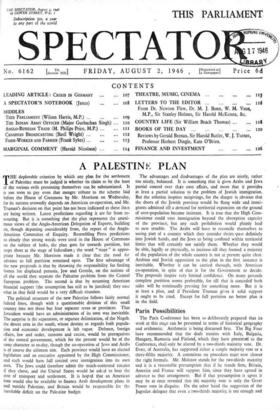 /II HE deplorable criterion by which any plan for the settlement of Palestine must be judged is whether its claim to be the least of the various evils .presenting themselves can...

The Paris Conference has been so deliberately prepared that its work at this stage can be presented in terms of historical geography and arithmetic. Arithmetic is being...

Housing in . the Dark

The housing problem is essentially one which can be solved sud- denly but not quickly. There must be a long period of preparation of land, materials and men ; a long period of...

Mr. G. Odium was the owner of Manor Farm, Manningford, Wiltshire, from 1926 to 1942. It was a well-equipped farm, with a very famous Friesian herd, built up by Mr. Odium. When...

The Fate of the Southern Tyrol

The strength of feeling among all parties in this country regarding the destiny of the Southern Tyrol was demonstrated by last week's debate on the subject in the House of...

The main success of the Cabinet Mission to India was to secure the agreement of both Congress and the Muslim League to a long- term plan for a constitution based on two separate...

U NLIKELY trees sometimes bear strange fruits. The report of a sub-committee of the House of Commons' Select Com- mittee on Estimates on the expenditure in Germany of the...

An odd little ill-printed and much inisprinte,d booklet (The Mystery

of Victor Grayson, Pendulum Publications, 2s.), revives memories of a sensational by-election in I9o7 and a strange, turbulent, revolutionary figure who flitted across the stage...

The end of the apparently interminable Nuremberg trial is drawing

near. I gather that sentence on the accused may be- expected about the middle of September, and that whatever inclination to clemency the Court may have had has been...

Though there was always the danger that the Labour Government

with its vast majority would gradually initiate a totalitarianism of the Left there have not been many signs of it so far. But Tuesday of this week brought two of them, and very...

Fr is astonishing that any Government department should launch on

the world a document charged with so much superfluous silliness as the revised Highway Code. The value of the code itself is arguable, for it contains no hints or rules which...

' S NOTEBOOK T HE Press has critics enough at the moment, and I have no desire to lend them much support. But one or two recent manifesta- tions call rather imperatively for...

Bread-rationing may on the whole be working reasonably well. I

hope it is. But it is causing a lot of troubles about which not much has been heard. Ordinary tradesmen know their coupon-drill well enough by this time, and can usually be...

By WILSON HARRIS, M.P. P ARLIAMENT, the first in which Labour has ever commanded a majority, is adjourning for some ten weeks on August 2nd. Since it met for the first t i ne...

By MAJOR GURBACHAN SINGH G REAT BRITAIN has recognised India's claim to national independence whether it be self-government within the frame- work of the British Commonwealth...

By M. PHILIPS PRICE, M.P. MILE negotiations now in progress of the Russian Trade Delega- tion in London have aroused fresh interest in the prospects of Anglo-Russian trade....

By BASIL WRIGHT I N the current controversy over the B.B.C.'s Charter it has been curious to note that neither in the White Paper nor in the general discussions arising from it...

By FRANK SYKES W HEN the Wages Board approved a rise in wages for farm workers to the extent of raising the mintrnum wage by ten shillings a week the National Farmers' Union...

T HE word " serendipity," as coined by Horace Walpole, is defined as " the faculty of making happy and unexpected discoveries by accident." It is in this sense that the word is...

" Marriage a La Mode." By John Dryden. At the St. James's. HATS off to Sicily, it seems to me, is really the moral of this polished and successful revival. For it is in Sicily...

" Cluny Brown " and " The March of Time." At the Odeon, Leicester Square. SHE was a plumber's niece, was Cluny Brown, and she went one Sunday afternoon to Mayfair to unstop a...

Snt ' —The confusion of thought which surrounds_the subject of clerical salaries could hardly be better illustrated than by passag,es in two of the letters appearing in your...

" CERTAIN SECTIONS OF THE PRESS "

Sta,—In his gentle rebuke to the Methodist Conference, Janus has missed the main points of the Conference protest against the action of the B.B.C. and " certain sections of the...

WHERE INDIA STANDS Sm,—The meeting of the Muslim League Council at Bombay has made It obvious that, in a futile effort to pleas: all parties, the Cabinet Mission bas succeeded...

OWNERSHIP OF THE PRESS

StE,—In your issue of July 26th (page 78) there is a paragraph with regard to the suggested Government enquiry concerning the Press. In this paragraph you say: "Everything...

SIR,—Lovers of elementary justice, quite apart from particular lovers of Austria, must be sorely disappointed with the Foreign Secretary's reply to the debate on the South Tyrol...

Snt,—I have just read your comments on the Health Bill's progress, and note with much surprise that you consider that the operation of the Bill should benefit the health of the...

SIR,—Mr. Bevin rightly insisted that Trieste was a more important inter- national issue than South Tyrol. Yet his great conception of Trieste as a world port can be carried out...

SIR,—Mr. H. S. McPherson's views of Australian radio, as given in his letter in The Spectator of July r9th, are interesting. His comments on the article Sponsored Radio, by Mr....

SIR,—A question in Parliament by a Labour Member anxious to con- secrate May 1st in tribute to the efforts of " the workers " indicates an old grievance, which I share with...

SIR,—Although fully aware of the critical shortage of paper, you

publish a write-up, a puff, a blurb, an examination of Who's Who written by a most distinguished writer. In the book there are 34,000 (approx.) entries printed on 3,000 pages....

In My Garden By far the most satisfactory spectacle in

one country-house potager is the patch of cabbage of the variety Flower of Spring. The heads are enormous, but by no means coarse. A cabbage, after all, should be both...

THE farmer was enjoying his Sunday leisure, though work was

going on and a tractor with a patent hoe active in a large root-field. He was singularly happy (for a farmer) in the prospects for harvest, and I had walked past both oat and...

Census of Birds and Flowers in Palestine

While murder and outrage have been making all the news from Palestine, our soldiers with some civilians have been engaged in taking a census—and it is of peculiar interest to...

SIR,—A short time ago I received an _invitation to take a party of my senior pupils to the U.S.A. this summer so that the boys could form their own judgement as to life and...

The Circulation of Birds

Within the space of three days astonishing evidence of the international interest in birds reached me. The coming of the survey and census of Palestine arrived simultaneously...

SIR,—As I was never educated, perhaps you will be so good as to let me know the meaning of "soltsitur anzbulando." I enjoy your articles when I can understand them.—Yours...

A Mission That Succeeded Ambassador on Special Mission. By Viscount Templewood. (Collins. 16s.) ON June I, 1940, Lord Templewood—then Sir Samuel Hoare— arrived at Madrid with...

MAJOR Connirrr is a champion tiger - killer of India, but as Lord Linlithgow, who was Viceroy of India from 1936 - 43, points out in his appropriate commendatory foreword, Major...

Black Metropolis. By Horace R. Cayton and St. Clair Drake. (Jonathan Cape. 18s.) THIS is not one of those sultry, sordid stories of the life of the Southern negro which are...

SOLUTION TO CROSSWORD No. 384

THE SPECTATOR" CROSSWORD No. 386

[A Book Token for one guinea will be awarded to the sender of the first coma solution of this week's crossword to be opened after noon on Tuesday week, August 13th. Envelopes...

By CUSTOS WITHOUT showing any sign of real weakness, markets are drifting downward. Selling is not heavy, but unless and until buyers pluck up enough courage to come in jobbers...