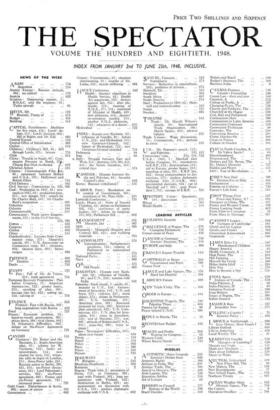 O NE of the worst complications in a complicated world is that the year 1948 will see a Presidential Election in the United States. At the time when the American public, still...

Dark Clouds over Palestine On January 9th the five members

(at last announced) of the United Nations Commission to preside over partition in Palestine will hold their first meeting at Lake Success. It is just possible that they may...

There is no reason to • hope that the reports submitted to the Minister of Civil Aviation by B.O.A.C. and B.S.AA. will make any more cheerful reading than did B.E.A.'s. It can,...

There is a gradation in popular support for the major national- isation schemes. At one extreme nobody provided any serious objection to the nationalisation of the mines, and...

Dr. Kaiser and the Russians

The all-German conference of Christian Democrats, which had been convened to discuss the crisis over leadership in Berlin and the Eastern zone, ' reaffirmed, on Monday, its...

Trade with Russia—at a Price

The publication of some, though still not all, of the terms of the Anglo-Soviet trade agreement has done nothing to remove the early impression that Britain has paid through the...

The abdication of King Michael of Rumania in itself changes nothing. The whole country being under the domination of a purely Communist Government, put in office and kept in...

y T was with something of the sick despair inspired by the acts I of aggression leading up to the war that the public read of the opening, on Christmas Eve of all days, of a new...

was last in the Legation quarter of Peking, whose administration formally reverted to the Chinese authorities this week. The charming and commodious enclave was not at its best...

There was a time when everybody had his or her

bomb story ; today the same kind of conversational priority is accorded to our experiences with bureaucrats. But whereas bomb-stories usually had a happy ending for the...

I feel sorry for Academician Varga ; I think he

has had bad luck. On December 4th he wrote for Pravda an article on " Inflation and Currency Reform in Capitalist Countries." At the time it seemed to the Editor a good, perhaps...

When, I found myself wondering the other night, do the

dead become funny? Someone—I think it was Mr. Handley—had just cracked a joke on the air about not wanting to be Nelson, " with a flock of pigeons in his hair and a Washdown...

A SPECTATOR 'S NOTEBOOK I T has never been entirely clear

to me why we persist in starting the New Year on January tat. That corner of the planet which we inhabit presents at this season no symptoms whatsoever of rebirth, of renewal,...

By SIR STANLEY REED, K.B.E., M.P. Bombay. T HIS is the " other India "—the India of a few hundred millions free, or comparatively free, from the massacres and migrations which...

By PETER FLEMING E VEN before the arrival of the Normans, whose passion for field sports was of great though indirect benefit to forestry in this 'country, the English had...

• By JOHN A. HAWGOOD T HE year 1848 has been described by G. M. Trevelyan as the turning-point at which modern history failed to turn. This aphorism brilliantly enshrines a...

By R. d'E. ATKINSON D URING the past sixty-five years only one really bright comet, "comet r9ioa," has followed a path which gave observers in northern lands a thoroughly...

By GEORGE BRINSMEAD T HE Americans have had a reminder that Panama is not only a canal, but also a country. The U.S. Government proposed to construct a new sea-level canal...

By HAROLD NICOLSON A LL really nice people assert that they enjoy a visit to the circus. It is certainly agreeable, in this harsh and angry world, to sur- render for a while to...

Two entries under the heading Critics . in Schumann's aphorisms have given me food for that particular kind of reflection which is practised all the year round in Russia under...

THE THEATRE Plays for the Holidays OF the 3o-odd productions (apart from pantomimes and Christmas revivals) now running in the West End I have seen only about zo: so I cannot...

IT is, I think, generally granted that the Fairbridge Farms represent the best of all the forms of emigration from Great Britain to the Dominions. This Christmas a special...

LARGE-LIPPED, shock-haired, Neanderthal of brow, His face yet wore the

far ethereal look That comes and goes in animal eyes. He took The vast East Anglian heavens, which overbow The earthiest earth which ever dwarfed a plough, By native kingship as...

It is claimed by U.F.A.W. (University Fellowship of Animal Welfare) that a recent proclamation by the Church in Scotland is the first public avowal by any Church that kindness...

Plants Popular with Bees I notice that in answer to

a query what quickly growing hedge plants are popular with bees, the C.G.A. (which has a particular skill in answer- ing difficult questions) suggests that lonicera yunnanense...

Prognostic Berries One popular belief, doubtless now regarded as a

superstition, is particularly hard to kill: it is that few berries, especially few holly berries, portend a warm and kindly winter. Well, '4 cannot remember any year in which...

A good many people have kept a pod many sorts of apples in perfect condition till the New Year. Many of the russets, for example, are now at their best, and even Cox's still in...

SIR,— Surely Mr. Myer is incorrect in his statement that we,

the electors, do not vote for a policy, party or an issue. As electors this is precisely what we do ; how else would the electorate record its voice and retain control over the...

Snt,—Following the recent broadcast by Mr. Robert Birley, Adviser oxi, Education to the commander-in-Chief in Germany, may I ask for the courtesy of your columns to outline ways...

LETTERS TO THE EDITOR 4

DOCTORS AND THE STATE SIR, —It is very distressing to medical readers of The Spectator, a journal which a considerable number of us have taken and appreciated for years, that...

SIR, —May I suggest that the reason no one has troubled to query Janus's assertion in connection with Mr. T. L. Horabin and the North Cornwall seat is simply that Janus's views...

SIR, —The article by Canon Roger Lloyd on the railway ten years hence in your - issue of December 12th calls for some comment, which, in the absence- of observations from more...

'Sur,—In your issue of December 26th, under the heading Mr.

Bevan and the Doctors, you suggest that an aggrieved practitioner would find the machinery provided in the National Health Service Act less costly than an appeal to the law...

" THE HOUSE OF COMMONS "

Snt,—In his appreciative notice of my book on December 19th your ti reviewer strongly disagreed with my contention that many M.P.s " have to neglect the nation's affairs while...

Sw,—Mr. Harold Nicolson looks forward to the introduction of a system similar to "Kraft durch Freude," calling the latter "one at least of the more humane devices which the...

BRITAIN AND URUGUAY SIR,--i have read in your issue of

December 26th a most interesting article by George Brinsmead entitled Britain and Uruguay. I do not really believe that the title could have been better chosen, as nothing is...

SIR,—Mr. Chapman's complaint that Bradford, with only three members for 213,399 electors, will suffer more than any other urban area from re- distribution is not supported by...

Ste,—The attention of this department has been drawn to a letter which appeared in The Spectator published on December 5th, 1947, concerning the engagement of displaced peksons...

must serotest with vigour. In an obituary notice spelling mistakes are taboo. The name, Sir, is Razmak—not Ramak. I, too, enjoyed Mr. Douglas Brown's article, but he is wrong...

THE DIVINITY OF CHRIST

Sac—Mr. Robert Boothby, in his new book, I Fight to Live, which was interestingly reviewed in these columns recently, makes a statement which would be to me incredible as coming...

• ■• Sot,—Your reviewer in your issue of December 26th has most courteously included some remarks on the reprint of my book, Knole and the Sackvilles. I ant duly grateful to him...

Early Greek - Theology THIS book, from the learned author of

Paideia, comes to testify once again to the "inexhaustible fascination" which, as Francis: Cornford once exclaimed in a lecture, the tantalising fragments of early Greek...

Lord Hardinge's Memoirs Old Diplomacy. The Reminiscences of Lord Hardinge of Pcnshurst. (John Murray. - 18s.) COULD the old diplomacy have succeeded where the new diplomacy of...

EDITORS, students and actors have long known that Shakespeare had a large and tolerant view of life, and that there are aspects of his work which need give no offence, though...

The Problem of Meaning

A Grammar of Motives. By Kenneth Burke. (Dennis Dobson. 30s.). KENNETH BURKE is a distinguished American literary critic. The blurb of his new book claims that it " may well...

Indian Art. Edited by Sir Richard Winstedt. (Faber and Faber. 7s. 6d.) MANY of those who have written about the exhibition which recently opened at Burlington House have been...

Magic and Healing. By C. J. S. Thompson. (Rider. 15s.) THERE have been many definitions of magic, and Mr. Thompson, in the first paragraph. of his most interesting and...

Mozart and the Stage

Surrey. By Eric Parker. (Hale. 15s.) AN established author, buttonholed by the editor of a series of county books and charged with writing one on Surrey (Suth, south, plus...

Parson in the Country

The. English Country Parson. By William Addison. (Dent. 16s.) THE fortunes and status of the country parson have varied consider- ably. In the eighteenth century clerical...

Marxism and 'the Atom

[A Book Token for one guinea will be awarded to the sender of the first correct solution of this week's crossword to be opened after noon on Tuesday week 7anuary 13th. Envelopes...

SOLUTION TO CROSSWORD No. 456 aeon A G del t

-By CUSTOS FOR the majority of investors 1947 was a reasonably satisfactory year. The best level for industrial Ordinary shares, it is true, was reached in January, and at...

Robert Louis Stevenson. By Lettice Cooper. (Home and Van Thal. 6s.) WHEN you compare the men of the eighteenth and nineteenth centuries you notice, with the increased...