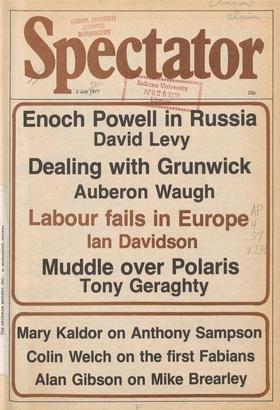 The sordid scenes outside the Grunwick factory dur- ing the past three weeks will have made it clear to those who have television sets with which to have seen them and...

From one Grantham to another John Grigg 'Hello,' said a kindly, bespectacled, rather harassed-looking man to eighty - two- year-old William Fry, standing at his front gate in...

Those of us in the press who have defended the judiciary against the attacks made upon it by Michael Foot and his defender, the Prime Minister, have been extremely ill- served...

Anyone for tennis? Auberon Waugh Colour television was not available on St Crispin's Day, 25 October 1415, so gentle- men of England then abed could not see what they were...

Dilemma of the Horn

Richard West Readers of Evelyn Waugh's Scoop may recall how Shumble, one of the journalists sent to Ethiopia, disclosed that a Russian spy had arrived in Addis Ababa on the...

John Grigg Janata's victory in India demolished the myth that poor people have no interest in civil liberty, and there was no myth in the whole world that more needed to be...

David Levy Mosco w When I was a child, my sister and I used to play a game, we called Oppositeland. We had to make sentences in which, each word used that had an opposite had...

Ian Davidson At the beginning of this year, when Britain was just embarking on its first-ever tenure of the Presidency of the Common Market Council of Ministers, there was a...

Tony Geraghty Four years ago an all-party parliamentary select committee including the present Foreign Secretary mulled over the future of the British nuclear deterrent, the...

Private enterprise Nicholas Davenport At ten o'clock last Friday the subscription list for £543 million worth of BP shares was opened and after one minute it was declared...

Human rights in Belgrade? Sir: Yugoslavia has been honoured by the other thirty-four signatories of the Helsinki accord in being nominated host to the Bel- grade Conference...

Sir: Colin Bell is inadequately informed about proportional representation. First he says that the particular form of PR favoured by the Liberal Party and by this Society...

Sir: Nicholas Davenport's articles (28 May and 4 June) and Mr R.A. Shakespeare's letter (11 June) should help to open - ,the minds of legislators and economists to the idea that...

Sir: Alan Watkins complains in a book review (18 June), that he has difficulty finding examples of the wit of Maurice Bowra. May I remind him of at least one specimen, strangely...

Mary Kaldor The size of the arms trade is difficult to grasp. At over $10,000 million, more than double what they were ten years ago, world- wide arms exports are still...

Katherine Duncan-Jones The general reader, I suspect, knows only three things about Sir Philip Sidney, all of them false: that he was a perfect Elizabethan courtier and...

Adam Fergusson hit by design or chance that a book with such a title arrives jacketed in the colours of London Transport's Jubilee buses? Tom Nairn is much concerned with why...

Peter Ackroyd The first half of the dust-jacket summarises Molly I'arkin's novel, the second half describes her life. These two short state- ments come admirably to the point,...

Benny Green 'Josh' Joshua Logan (W. H. Allen £5.95) There are certain professions whose mem- bers should be prevented by vigilante bands from ever writing autobiography; so...

Looking for Hoyland Bryan Robertson Following his historic show last year at Waddington, the modest chronology of paintings by John Hoyland in the 'mixed' exhibition of groups...

Eclectic John McEwen Craigie Aitchison (Knoedler throughout the summer) is one of the most idiosyncratic painters we have. All serious painters take account of the work of the...

Astronomy Rodney !Wines Aida (Covent Garden) To judge from next year's programme at Covent Garden we are going to have to get used to international all-star opera. Last...

Duncan Fallowell There is a battle on in London at the moment 'which will interest modern people like us, especially now that the Jubilee has stimulated the public's appetite...

War game Clancy Sigal A Bridge Too Far (Leicester Square Theatre) The battle to take the Arnhem bridge was an epic of courage by the soldiers who fought there and of rotten...

Burnt-out Richard Ingrams Quality not quantity is going to be the theme of the Society for the Exter- mination of Russell Harty, an idea which I floated in the Spectator a...

Giving up Jeffrey Bernard Final and incontrovertible proof that the Irish are bonkers was registered in last Tuesday's Sporting Life. I repeat the story for the benefit of...

Home and duty Alan Gibson The Jubilee Test was not so enthralling as the Centenary, one, partly because of the weather, , and partly because the captains . became a little...

Marika Hanbury Tenison There are times when I despair: a few days ago I actually met someone who considered broad beans to be a 'boring and unin- teresting vegetable' (to those...

The drinks of summer

Pamela Vandyke Price Summer drinks can really only be categor- ised by those who are certain of being able to sip them on patio or by pool. In Britain as she is acclimatised,...

Posterity Raymond Keene In May World Champion Karpov scored yet another crushing tournament victory, this time at Las Palmas, where results were: Karpov 13i (out of 15);...

Charles Seaton reports: Competitors were asked to compose verses beginning with the last line of any well known poem and ending with its first line, the new poem being pre-...

No. 969: Initial harmony Set by E. 0. Parrott: On the occasion of talks between Carter and Callaghan, some wit thought they might be helped by the two men having the same...