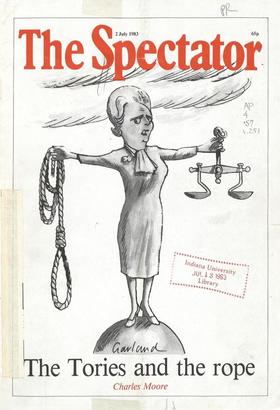 M r Kinnock falls involuntarily silent, and Mr Roy Hattersley starts talking. In a speech whose importance he was at pains to emphasise, Mr Hattersley told his constituency...

Who wants the rope? Charles Moore R oy Hattersley says he is a 'democrat'. This is his explanation why, although he opposed Labour policy on the EEC and nuclear disarmament,...

The two Britains Auberon Waugh RAF Bruggen, North Rhine-Westphalia A large notice greets the visitor as soon he is inside the heavily guarded gates of RAF Bruggen, the most...

Timothy Garton Ash Krakow E very weekday you can find classes of weary schoolchildren trooping through the crypt of the cathedral in Krakow's old Royal castle, where Poland's...

Peter Nichols Rome 'The term 'normalisation' has a bad taste as well as being ugly but it may sum up, in a word, what is happening in Italy. Nor- mality could be the watchword...

Nicholas von Hoffman Washington R onald Reagan can be endearingly in- formal. His informality takes many forms, one of which is in his giving a once- weekly radio talk. Every...

Richard West A famous Johannesburg liberal was sounding off on the need for black ma- jority rule, when somebody asked her what would become of the Asians in Natal, who have...

Roy Kerridge Last week a verdict of suicide was returned on Colin Roach, a 21-year-old black man who was found dead of shotgun wounds in the entrance half of Stoke Newington...

John Stewart Collis I saw a curious thing on the Centre Court. After a five-set match the loser walked off the court with his arm round his oppo- nent's shoulder. It was not...

Alan Gibson O 18 June, at Tunbridge Wells, I was 'L./watching India play Zimbabwe in the Prudential Cup, and reflecting, as we have all done so often before, how unsuited In-...

Lord Salisbury made a speech at the annual dinner of the Constitutional Union on Wednesday at St James's Hall, which contained something more than the old criticisms on the...

Changing the guard Jock Bruce-Gardyne rr his weekend the most influential 1 Governor of the Bank of England since Montagu Norman steps down after a decade in the chair. The...

Admen and snobs Paul Johnson Tulian Barnes, the gifted novelist and J normally shrewd TV critic of the Observer, got himself into an indefensible posture recently, when he...

Sir: I suppose it is annoying for the Anti- Apartheid Movement to be lodged in Selous Road (Notebook, 18 June). But could they not have found premises elsewhere? It would be bad...

Sir: It was with consternation and dismay that 1 took notice of certain utterances made by Alan J. P. Taylor (28 May). By reproducing with parrot-like fidelity the official...

Horse sense Sir: It was with interest that I noted your comments on Camden and the Mandelas (Notebook, 18 June). For once the North- East has beaten the South in honouring a...

Sir: I have roughly ten miles of dry-stone walls (we call them dykes) on this farm, and while my attitude is different from that ap- parently taken by Gloucestershire farmers...

Sir: Auberon Waugh points out (18 June) that the second editor in succession has been made Chancellor of Exchequer. Will Chancellor of the Spectator make it a hat- trick? T. C....

Sir: The more Paul Foot and Tam Dalyell write about the Belgrano affair the more unconvincing is the case for any inquiry in- to it. There is no difference in 'truth' bet- ween...

Duncan Fallowell The British At Table, 1940-1980 Christopher Driver (Chatto and Windus £8.95) T here are interesting things to be learned from this book. The printing of war...

Mary Lutyens The Spiritualists: The Passion for the Occult in the Nineteenth and Twentieth Centuries Ruth Brandon (Weidenfeld and Nicolson) A ccording to this lucid and for the...

Andrew Boyle Gre g or Strasser and the Rise of Nazism Peter D. Stachura (George Allen & Unwin £12.50) W hy should any sensible person go on believing that it was entirely the...

Confounded Maureen Owen T here has been rather a surreal quality to broadcasting recently. Scheduled pro g rammes have mysteriously failed to ap- pear and there has been an...

Sit. vac. Peter Phillips I ow much more interesting it is to talk about music than musicians,' Bernard Shaw once wrote rather wearily after reviewing a particularly...

Old hat Peter Ackroyd The Meaning of Life 8', selected cinemas) I n the absence of a further 'Carry On . . adventure, the new 'Monty Python' film is the nearest we have to...

Grunt and groan Taki O nce upon a time, back in the good old days when mercenaries were not allow- ed to mix with decent folk, I used to enjoy watching Wimbledon. I knew and...

Thugs P.J. Kavanagh It will nearly be over by the time this appears, but I have become more and more sceptical of the coy public references to the approach of the Wimbledon...

Unforgettable Jeffrey Bernard E veryone seems to be falling off their perch. Just after attending the memorial service for an old friend, Peter Dunbar, I heard that Teddy...

Prodigal son David Spanier i o become chess champion of the world ts a long and arduous trek through five stages, note the editors of Fighting Chess, a new collection of the...

No. 1276: High and dry Set by Jaspistos: 'Psychiatric' advice col- umns in magazines can be maddeningly chirpy and useless. Suggestions, please, from `Dr X', addressed to...

Jaspistos reports: Competitors were asked for a 'cinquain` with one of the following four titles: 'Susanna and the Elders', 'Triad', 'Niagara', 'The Warning'. The creator of...

T he Pope returned from his visit to Poland to read in the Vatican newspaper, L'Osservatore Romano, a leading article headed 'Honour to the Sacrifice' which said that Lech...