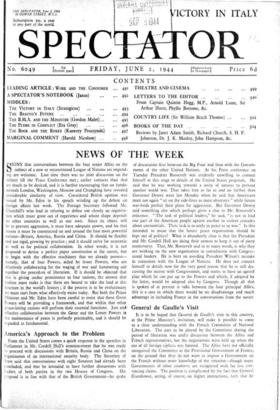 S IGNS that conversations between the four major Allies on the subject of a new or reconstituted League of Nations are impend- ing are welcome. Last time there was no joint...

America's Approach to the Problem

From the United States comes a quick response to the speeches in Parliament in Mr. Cordell Hull's announcement that he was ready to proceed with discussions with Britain, Russia...

It is to be hoped that General de Gaulle's visit to this country, at the Prime Minister's invitation, will make it possible to come to a clear understanding with the French...

The fighting on the left - wing of the Fifth Army in Italy has been rather loosely described as the " battle for Rome." It is evident that Allied strategy has been aiming at the...

For more than a fortnight Bulgaria has been drifting without a clearly defined Government or policy, with Bojilov in vain attempting to resign and the more emphatitally pro-Nazi...

An official statement issued on the second anniversary of the signing of the Anglo-Soviet Treaty describes the help which has been given the Russian Armies by blows struck in...

It is a misfortune that owing to the importance of the war news, and the general pressure on space, more prominence could not be given in the daily papers to the very striking...

WORK AND THE CONSUMER

HE White Paper on " Employment Policy " (not, be it noted, on unemployment—the difference between a positive and a negative attitude) must not be considered in isolation. A...

E MBEDDED in the mass of good news from Italy is one thoroughly sinister item. The Times correspondent with the Eighth Army, telegraphing a few days ago, spoke of the capture of...

THE VICTORY IN ITALY

By STRATEGICUS N the great battle in Italy it is perhaps the best indication of I General Alexander's success that its full measure cannot yet be determined. His objective was...

By A SPECIAL CORRESPONDENT The shadow of coming events is, therefore, being cast very close to the Protectorates—Basutoland, Bechuanaland, Swaziland. Their incorporation in the...

THE PLEBS IN CONFLICT

By ERA GRAY The majority of the Plebs stick hard at their jobs, the reasons being twofold: (a) that most of them realise the importance of their work to the Nation's effort, and...

THE BOOK AND THE ROSES

By KSAWERY PRUSZYNSKI A FTER the capture of Monastery Hill, the B.B.C. correspondent broadcast: " I watched a tiny figure coming down the tortured mine-track, the track that...

By HAROLD NICOLSON R ECENT criticisms of the discipline and behaviour of the United States troops in this country have, as is proper, led many people to rush to their defence....

" This Happy Breed." At the Gaumont and the Marble Arch This Happy Breed is a careful and in places painfully unsweetened account of twenty years in the life of an English...

A Night In Venice." At the Cambridge.—" The Quaker Girl." At the Coliseum. The Sadler's Wells Ballet. At the New. IT is typical of the attitude of English musicologists of the...

Snt,—There may be good reasons for increasing the salary of research workers in applied biology, but the average income of general practitioners is quite irrelevant. Do the...

Sm,—Mr. Quintin Hogg's review of Your M.P. in a recent

issue was, of course, devastating, but The Spectator is not widely read by the sort of ill-informed people who are deceived by the silly sophistries of Guilty Men and Your M.P....

Stit,—Capt. Quintin Hogg is competent to deal at his leisure

with the effusion of Mr. Michael Foot in last week's Spectator. And indeed with any number of Feet—hot or cold! As an ex-Tory candidate it interests me to observe that the venom...

Sra,—The " Greek in England " whose letter you published in your issue of May 26th warns us that, despite the recent encouraging news_ from the Lebanon, there still remains " a...

LETTERS TO THE EDITOR Stn,—Mr. F. W Bevan aptly illustrates the truth of my criticisms. He said he did not know that " the present Prime Minister had emoted against the...

Snt,—How fascinating are the inconsistencies of man. Those who most

emphatically deny the Christian doctrine of Originhl Sin are the most ready in books such as Guilty Men and Your M.P. to accuse their enemies of wickedness. It in the Christian,...

Sta,—The White Paper on the above raises many contentious questions of principle, chief among which is the question of whether it is a good thing or, as I think, an almost...

SIR, —Almost every day we see or hear that appointments are made to good substantial junior jobs in public or private concerns while many who might have been applicants are out...

Sta,—The freedom of our minds and the liberty of our persons are so greatly at stake in this war against Nazi logic that we cannot afford to let a sentence stand without...

Marshall forgot to take into consideration the very important factor of working hours in relation to salary. A doctor doesn't work a 48-hour week, nor does he enjoy the long...

Sm,—In his reply in your issue for May 19th to one of my simple questions, Sir Christopher Robinson admits that conscription for the British Forces was not • attempted in...

VIRGIL'S BASKETS SIR,—Owing to the big demand for air-borne baskets

and panniers for war purposes and consequent restrictions in the use of willow rods for domestic baskets, the latter are being made from various substitutes, but obviously not...

SEVERAL characteristic spots Or districts in England are in a certain jeopardy. One is the Peak of Derbyshire, perhaps the most popular holiday haunt within the island. Now on...

Beck, accuses me of being two years behind the times. It is true that the Saturday Evening Pon changed its violently anti-British policy in 1942, but I have read many covert...

Benjamin Franklin to Bishop Shipley, the then Bishop of St. Asaph, suggests that dehydra- tion is no new practice: " I have taken the liberty of sending a specimen of the...

MOTHER'S " DAY OFF" Sta,—Now that the Government have issued

their White Papers on the proposed National Health Service it may be assumed that they will follow them shortly with detailed proposals on child-care, an important part of the...

Sing High I Sing Low I By Osbert Sitwell. (Macmillan. Kos. 6d.) SIR OSBERT begins one of the essays in this collection with the words: " To all writers, whether chiefly...

The Russian Army. By Walter Kerr. (Gollancz. 7s. 6d.) MR. KERR in this book satisfies a good deal of our natural curiosity about the Red Army. The best part of his book...

The Teaching and the Teacher

DR. awls has given to the words of Christ, as recorded in the synoptic tradition, a closeness of attention which is not too common in theological writing today. For the emphasis...

Ripe for Shaking. By Hugh Massingham. (Cresset Press. gs. 6d.) The Rock and The Wind. By Vivian R. Bretherton. (Eyre and Spottiswoode. 9S.) The Turnbulls. By Taylor Caldwell....

Shorter Notices THIS book is a summary of political and

parliamentary history from the late seventeenth century to the present day. As a summary it is on balance neither much better nor very much worse than other similar potted...

M Book Token for one guinea will be awarded to

the sender of the first correct solution of this week's crossword to be opened after noon on Tuesday week, june 13th. Envelopes should be received not later than first post that...

SOLUTION TO CROSSWORD No. 271 SOLUTION ON JUNE 16th.

The winner of Crossword No. 271 is H. C. B. BROWN, Ringmer, Little Heath Lane, Cobham, Surrey.

The Praise of Folly. By Desiderius Erasmus. Translated, with an

Essay and Commentary, by H. H. Hudson. (Oxford University Press. 15s. 6d.) THE originality and charm which made The Praise of Folly the most popular of Erasmus' works in his...

Somerset Birds and Some Other Folk. By E. W. Heady.

(Eyre and Spottiswoode. its. 6d.) IN this very pleasant book a naturalist, who is also a poet, writes about the country life and the common birds of the West Country ; about...

By CUSTOS Ir speaks well for the City's state of enlightenment in financial matters in these days that the brave new theories outlined in the White Paper on Employment Policy...