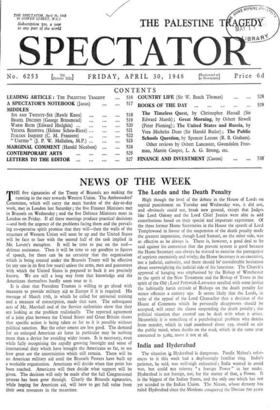 The situation ip Hyderabad is dangerous. Pandit Nehru's refer- ences to it this week had a dePiessingly familiar ring. India's patience, he said, was well-nigh exhausted ; India...

It is clear that President Truman is willing to go ahead with measures to provide • military aid to Europe if it is required. His message of March 17th, in which he called for...

The Lords and the Death Penalty

High though the level of the debate in the House of Lords on' capital punishment on Tuesday and Wednesday was, it did not, and obviously could not, break new ground, except that...

The fact that the return of plebiscite forms by doctors to the British Medical Association is postponed till Saturday of this week will give an opportunity for the signatories...

Petrol and the Law

The purpose of the Motor Spirit (Regulation) Bill is, in its own rather surprising words, "to create certain offences in connection with the supply and use of motor spirit." In...

For no group is stock-taking after the Italian elections going to prove harder than for the followers of Signor Nenni. While oppor- tunists might once have made a case for...

The first aim of any inquiry into restrictive practices in industry is to establish the facts. Indeed American experience has shown that, in most cases in which the facts are...

T HIS week the Lords have to some extent stolen the scene from the Commons with their two-day debate on the Criminal Justice Bill. Inevitably the new clause providing for the...

The Christian Action meeting at the Albert Hall on Sunday tvening will have effects reaching far beyond the large audience which assembled to hear Lord Halifax, Sir Stafford...

Mr. Herbert Morrison's assurance that the Labour Party would take effective steps against those of its members who habitually took a line hostile to Government policy,...

B EFORE this week is out we shall have entered on the month of May. Before May has run half its course Great Britain will have relinquished the Palestine Mandate. The formight...

Revelations on certain aspects of British education are disturbing. In

different papers one day this week there occurred (1) the assertion by a commission on religious education appointed by the Bishop of Liverpool that "more than 3,000,000 adults...

I was not at the Christian Action meeting at the

Albert Hall on Sunday, but I was considerably impressed by the speeches, particularly Lord Halifax's and Sir Stafford Cripps's, reported at length in The Times and other papers....

T HOUGH the Prime Minister declined on Tuesday to say whether the conversations on the reform of the House of Lords had finally broken down I have not found anyone who believes...

My paragraph last week on certain transactions between car- owners

and cars-for-hire firms was simply a factual note on what I am given to understand has been happening on a large or small scale.. Further directions on how to work the racket...

* * * * I desire to say nothing disrespectful

about the new commemora- tive stamps, except that the aid. one, at any rate, does not move me to recant in any way what I said last week about British stamps generally. The Li...

The acquisition of the Nigerian Daily Times by the Daily Mirror, following the visit of a director of the latter journal to West Africa, is, on the face of it, a curious...

By RAWLE KNOX J UST when Americans were beginning to believe that the English, to judge by their conduct in India, Egypt, Burma and Ceylon, were becoming quite democratic, Mr....

By GEORGE BRINSMEAD T HE West has acquired a new recruit. The group of nations which the U.S.A. is gathering together to offset Russia's Eastern bloc has now been joined by...

By EDWARD HODGKIN I N the days of Nash the church bells used to ring in Bath to announce the arrival of each new visitor, thus exciting a curiosity which was not set at rest...

By HELENE SCHEU-RIESZ "H OW did you find Vienna? Is it dead? Is the old, beautiful Vienna gone for ever?" These are the questions I am continually being asked since I visited...

By C. M. FRANZERO Rome. TALY is so incredibly calm after the pandemonium of the last few weeks that everyone seems to be feeling that mixture of joy and surprise of men who...

By J. P. W. MALLALIEU, M.P. I T SUPPOSE I have climbed that embankment a couple of hundred times to catch the midnight train from London Road. Sometimes I've been walking from...

Saturday appeared an article by Professor John Garstang which seemed to me to concentrate within its two columns all the charm of archaeology. It is a charm which derives from...

"The First Gentleman." (Empire.) — " One Night with You." (Odeon, Marble Arch.) IT is strange how producers of films about the Prince Regent persist in selecting actors with...

"Hamlet." By William Shakespeare. (Stratford-on-Avon.) THERE is too often an

air of polite patronage in London's criticism of Stratford. Neither the fruits of Sir Barry Jackson's enlightened policies nor Mr. Michael Benthall's production of Hamlet...

THE THEATRE "Frenzy." Adapted from the Swedish of Inginar Bergen. By Peter Ustinov. (St. Martin's.) MR. USTINOV'S work, whether as actor, dramatist or film-director, is always...

IN a few lines nothing can be said about the Albertina drawings at South Kensington which is neither superficial nor trite. There are five great collections of drawings in...

VAUGHAN WILLIAMS'S new symphony, which was given for the first time on April 21st by the B.B.C. Symphony Orchestra under Sir Adrian Boult, is a major addition to his works....

TO THE EDITOR LETTERS

Sin,—Taste is, undtniably, a matter of taste ; but I must ask permission to comment on Janus's postage-stamp paragraph in your issue of April 23rd. Admittedly, Great Britain's...

Sta,—I entirely agree with Mr. Kenyon's opinion that the decisive

reason for Eastern Europe'S subjugation by the Communists was the presence of the Russian occupation army and police. In Poland and the other coun- tries the secret police is...

SIR, —Any lack of success in the National Health Service will be due in large part to defects within the Act itself. Like the Education Act, it is premature. In the absence of...

Sta,—Janus has raised a timely issue over the, lamentable paucity

of imagination in our stamp design. Except for the colours used, which are nearly always good, we limp heavily in the footsteps of most foreign! countries, and certainly of our...

SIR, —I am distressed by one aspect of recent educational policy that seems not to have received sufficient attention—I mean the allocation of a quota of women teachers to an...

Stir,—I hope that readers of The Spectator will realise how lucky they are to have Mr. Jennings to explain Resistentialism to them. It is not often that one comes across such a...

SOMETIMES, even in this island of quiet gradations, spring gallops withal. We are presented of a sudden with transformation scenes, almost as when the snow melts on Siberian...

In the Garden We are advised—by no less an authority

than the experts of the Women's Institute—to dry our lawn cuttings for use as fodder for pigs and poultry. Doubtless the advice is good ; but this fine grass has many garden...

Sta,—If Janus knew the facts, he would realise that the formation of this League imparts a touch of tragedy rather than comedy to the controversy. The public does not know or...

Redeunt Jam Gramina Perhaps the most obvious example of the

rush of spring has been emphasised by the latest decree of the Minister of Food. The grass has grown with rare lusciousness, and the land was seldom so green. I noticed at one...

And what of the birds? They, too, came in a rush simultaneously. Swallow and cuckoo, in my neighbourhood, synchronised ; and the paddock was almost noisy with willow-warblers on...

Stephen Haggard The Timeless Quest. By Christopher Hassan. (Arthur Barker. 15s.) "What needeth then apologies to make To set forth that which is so singular?" STEPHEN HAGGARD...

Great Morning. By Osbert Sitwell. (Macmillan. 15s.) IN this, the third volume of his autobiography, Sir Osbert Sitwell tells us—mentions, rather, in an aside—that the whole...

Black and White Doyle. By Dana Hambourg.—Tenniel. By Frances Sarzand.

Cruikshank. By Ruari McLean. English Mastem of Black and White. (Art and. Technics. 8s. 6d.) A corrvrNaNG argument could be evolved in favour of the view that the reputation of...

The Public Schools Question With Other Essays. By Spencer Leeson. (Longmans. 8s. 6d.) Tins is a tactful little book. Its four essays deal with the most controversial questions...

Growing Up. By Olivia Manning. (Heinemann. 9s. 6d.) BRILLIANT scene - painting, detail after detail laid on with a hundred shades of colour (almost too much colour), Ireland,...

The Music of Delius

AT the age of seven I over-rated my capacity for pineapple and just ten years later I repeated the experience with the music of Delius. Quite illogically I connect the two...

SOLUTION TO CROSSWORD No. 473

[A Book Token for one guinea will be awarded to the sender of the firs: correct solution of this week's crossword to be opened after noon on Tuesday week May 11th. Envelopes...

The Memoirs of Pontius Pilate. By C. M. Franzero. (Allen and UnwirE 108. 6d.) AT a time when so much criticism of the arts is angrily subjective, it may seem pedantic to...

By CUSTOS IF proof were needed of the new caution in the stock markets it is surely to be found in the lack of any real response to the prospective repayment early in May of...