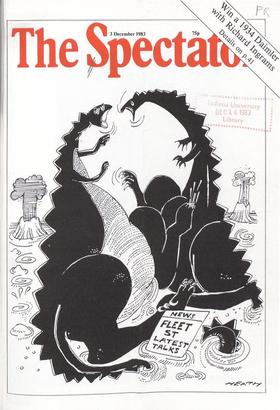 W hen she goes to Athens next week, Mrs Thatcher will need to make use of arts very different from those which she displayed in Delhi. At the Commonwealth prime ministers'...

Labour and the law Charles Moore I n industrial disputes, trade unions start with a great psychological advantage they know what they want. As long as their members agree with...

4 W on't she be amused,' says Prince Albert in the poster advertising the exhibition Albert, His Life and Work at the Royal College of Art. Above are printed the words 'Victoria...

Thoughts on the Ukraine Auberon Waugh M y unavoidable absence in New York last week kept me from the Fortieth Anniversary meeting of the Anti-Bolshevik Bloc of Nations in...

Dreamtime in the Bush

Robert Haupt Melbourne A yers Rock sits in the belly of the Australian continent like a navel jewel. It is the world's largest inselberg ('island mountain) and events that...

Richard West San Salvador O ne of the hazards of Central American travel for those who go on the cheap, is having to spend a night at Miami on the way. This city gets ever more...

Charles Glass Damascus 'They relate in our country They relate with sadness How my comrade who went away Came back in a shroud.' [From And he Returned in a Shroud (Someone,...

Peregrine Worsthorne efore the Queen agrees to preside over .1-1P some domestic charity exhaustive in- quiries are made as to the respectability of all those concerned with the...

David Carlton M r Ian Mikardo and Mr Stan Newens have recently made common cause with Sir Oswald Mosley's widow in seeking the opening of the so-called 'Mosley Papers' at the...

Peter Paterson R eturning by train from Manchester to London a couple of weeks ago, I fell in. with a small crowd of National Graphical Association printers going home after a...

The Electra of Sophocles, was per- formed last week at Girton by the Students of the College, with a success which certainly justified the attempt. The play was selected as...

The issue is monopoly Paul Johnson T here are a number of separate but related issues in the National Graphical Association dispute which hit Fleet Street last weekend. The...

This week's question, set by Richard Ingrams, is to be found on page 41.

The road from Rio Jock Bruce-Gardyne I was bidden to lunch last week with one of our leading engineering firms. Others present included a senior mer- chant banker, and an...

Oxbridge's blunt instrument Sir: Writing from his 'official address' — to quote Paul Johnson — John Casey ('Attacking scholarship', 19 November) might have given us the benefit...

Sir: P..1 • Kavanagh's 'Postscript' of 19 November asked, 'why do people come to poetry readings? What do they want of us?' Some of those committed to purifying and...

Sir: 'The Magnificat Group' (Letters, 26 November) indeed. 'Do you mind the dain- ty coyness of it?' as Myles na Gopaleen ask- ed in another context. They make no real answer to...

Sir: May I be allowed to comment briefly on two points in Mr Mark Amory's kind review (19 November) of my Married to a Single Life? First: The book closes when 1 was still in...

Making trouble Colin Welch B efore trying further to help the Met- ropolitan Police with their inquiry, may I make it clear that I am not against any and every sort of inquiry...

Exotic Kedgeree Shiva Naipaul Real Wicked Guy: A View of Black Britain Roy Kerridge (Blackwell £9.95) T remember — this was some 20 years ago I— sitting out on the wind-swept...

John Jolliffe The Canary, and Other Tales of Martial Law Marek Nowakowski (Harvill Press £7.95) The West's general attitude to Poland tends to consist of intermittent,...

Raymond Carr From the Falklands to Patagonia: The Story of a Pioneer Family Michael James Mainwaring (Allison & Busby £12.95) ome people have all the luck. A profes- sional...

Timothy Garton Ash H ow many travel writers could stand the test of having another writer share their journey, step for step, incident for in- cident, and then sit down,...

Richard West The World of Uncle Fred P.G. Wodehouse (Hutchinson £9.95) W hen the Book Marketing Council recently published a list of the dozen best novels since the war, it...

Glint and vigour John McEwen he artistic poles — and financial props — of the Academy's year have for long been the Summer Exhibition and the Winter Exhibition, the winter one...

Gratified Richard Ingrams A s a journalist my feelings about a newspaper strike are mixed. I can't help a sense of outrage over a group of print workers bringing• the whole...

Winding up . Peter Ackroyd Rear Window ('PG', selected cinemas) A lfred Hitchcock's 'classic' (any film made more than 20 years ago tends to be called this) was released in...

Over and out Taki Cairo A lthough Arab Islamic history began in the Arabian Peninsula — for that was Islam's birthplace and site of its initial simplicity and triumph — it...

Frights P.J. Kavanagh I used to avoid the radio because I thou g ht it stopped me working, but now, whether because I have to g et up early to take people to school, or...

Pitiful Jeffrey Bernard T he fact that life is a complete and utter bastard struck me so overwhelm- in g ly a few minutes a g o that I had to g et out of bed and make some...

Jaspistos reports: Competitors were asked for typical comment by a well-known jour- nalist on the banning by a future govern- ment of the private motor-car, and/or the...

No. 1298: Fin de siècle Set by Jaspistos: A sonnet, please, in the manner of a tired poet of the end of the last century, with the following rhyming words: wears, row, glow,...

Hall of fame Raymond Keene O ne aspect of the Candidates' matches which has so far eluded comment is the layout in the Hamilton Banqueting Hall of the Great Eastern Hotel....

A prize of ten pounds will be awarded for the first correct solution opened on 19 December. Entries to: Crossword 636, The Spectator, 56 Doughty Street, London WCIN 2LL. 1...

T he 22-week-old dispute between the National Graphical Association and the management of the Messenger group of newspapers in Stockport spread to Fleet Street. In response to...

with Dame Edna Everage Hello Possums! I rather adore the crooked little face on this increasingly 'visible' media person. I knew him first many moons ago when he got the first...

1. Dame Edna Everage will introduce one question by a different person in each iAsue of The Spectator from now until the 10 December issue. 2. Do not send in your replies each...

Back Numbers If you missed the previous weeks' issues, it

is still possible to enter the competition. Back numbers are available from: The Spectator, Competition Back Numbers, 56 Doughty Street, London WCIN 2LL. To obtain copies, just...