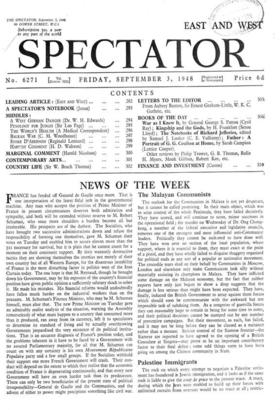 The outlook for the Communists in Malaya is not yet desperate, but it cannot be called promising. In their main object, which was to seize control of the whole Peninsula, they...

F RANCE has fended off General de Gaulle once more. That is one interpretation of the latest fitful jerk in the governmental machine. Any man who accepts the position of Prime...

The rock on which every attempt to negotiate a Palestine settle- ment has foundered is Jewish immigration, and it looks as if the same rock is liable to give the coup de grace...

The situation in Burma continues to deteriorate. Martial law has been proclaimed in various parts of the Burma Union, including the Karenni States, and sporadic outbreaks of...

The Death of Zhdanov

There would seem to be no justification for the none the less natural question whether Andrei Zhdanov, Stalin's successor as Secre- tary of the Communist Party in Russia and a...

A New Start in Antarctica ?

It was quite possibly an accident that the announcement of new American proposals for the joint administration of the Antarctic by the eight Powers making territorial claims...

The decision of the Cabinet to proceed with the trial of the German military leaders now held in custody in the British zone has caused much understandable disquiet. It has also...

A curious contrast is presented by the report on its first year's work for refugees by the Preparatory Commission of the International Refugee Organisation and the report on...

When the Government announces its detailed plans for national- ising the iron and steel industry, as it must soon, the battle will be joined. And as each day passes the...

A Menace from Margate

The general public is now fairly familiar with the complaint of rank and file trade unionists of inertia and bureaucracy at union headquarters and Transport House, and with the...

In the early 'twenties the Cabinet was understood to have worked on the assumption that there would be no major war within a period of ten years at the inside and to have fixed...

EAST AND WEST A NTAGONISM between East and West presents

a triple problem—in Berlin, in Germany as a whole, in Europe as R whole. In each case it is fundamentally the same problem, and in each case the issues involved are half...

Hard things are often said of British hotels. Some, certainly,

do not deserve it. A car-load of good citizens returning light-pocketed from holiday earlier this month called at a well-known hostelry in the South Midlands for some light...

Is this country full of hypochondriacs ; or full of

people who like getting something for (as they think) nothing ; or full of people who really need medical attention and have never been able to afford it before ? The questions...

Now and then one finds in some corner of a

daily paper a bit of out-of-the-way news of quite unusual interest. There was such a message in Tuesday's Daily Herald from its Cape Town correspon- dent telling of the...

I don't know whether Donnybrook Fair is still in existence.

If it is it must by all accounts be beaten to a frazzle by that new and entertaining institution, the Congress of Intellectuals that has been meeting in the past week at what...

A SPECTATOR 'S NOTEBOOK T HE last instalment of evidence given

before the Royal Commis- sion on the Press is devoted exclusively to Lord Kemsley and what his critics consider his iniquities. I . am surprised that more attention has not been...

By W. H. EDWARDS D URING the first week of September the Constituent Assembly elected by the diets of the German Lander of the Western Zones will discuss the draft of a...

By A MEDICAL CORRESPONDENT O N Wednesday of this week the World Health Organisation blossomed out of the Interim Commission stage, in which it has been incubating for the past...

By C. M. WOODHOUSE T HE Greek armed forces have just won what appears, by all accounts, to be a notable series of victories in the north of Greece. There has been talk of the...

By REGINALD LENNARD T HE recently published Report of the Select Committee on Estimates deserves more attention than such documents usually receive, for it deals with the...

PICTURE FROM A NIGHTMARE

A host of the icy dead are among us. They come, marching in legions Over the white sea. They break upon us with a roar With a white iciness With the chill of the North wind And...

By H. D. WALSTON T T is usual for the effects of drought, flood or frost on farming first to be ignored entirely by the general public and then to be grossly exaggerated....

By HAROLD NICOLSON I REGRET that I was not invited to attend, in however servile a capacity, the recent Danube Conference at Belgrade . : I should have enjoyed watching Sir...

THE THEATRE Eden End. By J. B. Priestley. (Duchess.) MR. PRIESTLEY'S play emerges with reasonable credit from its revival. There are perhaps times when the sitting-room of Dr....

Variety. (The London Palladium.) The principal attraction at the Palladium

this week is Miss Dinah Shore ("Hollywood's Captivating Songstress "), who sings a number of American songs. While she does this she looks slightly appre- hensive, as though she...

Edinburgh Festival THE Glyndebourne production of Con i Fan Tutte has certainly been one of the best of the festival performances so far. The cast is much more evenly matched...

An authority on bird migration, who has kept a diary for very many years, tells me that the swifts were flying over his Surrey home on August 19th, the latest date in his...

THE world is all too closely knit For rival Powers to rule in it, Though oft recurring strife may seem To favour the Iranian dream. There is no clash of cosmic kings, But of...

In a note last week on the six best roses, something was said of McGredy's yellow and Mrs. McGredy. I read in an account of the incomparable Southport flower-show that these two...

The Master Sense A dog of my acquaintance, a black

Cocker Spaniel, has provided a new note on the senses of animals. He has always been remarkable for his skill in finding lost golf balls. Well over 1,000 are to his credit, and...

COUNTRY LIFE Is the best harvest (potentially) of modern times

salved or saved ? I think we may say "saved." I have never seen a more general endeavour to secure a good result. Extra hours of work have not only been asked of labourers. They...

Sta,—I am the second-in-command of a company that trains national service men in Germany, and I should like to add a few words to the problem from our point of view. In the...

Sus,—In your issue of August 27th, on page 272, there are two weighty letters on Nurses' Grievances from persons obviously well qualified to speak. On page 285 there is an...

ICARENS INTO THE BREACH SIR, —The news from Burma now weighs heavily on those of us who have always supported the granting of self-government to that country. No doubts are...

SIR, —Mr. Riding in his letter on Conscript Service states that

it is "inevitable and salutary that there should be fatigues. in army life." I remember long ago placing a letter for signature before my old friend Sir William Rycroft in...

sm,—As I indicated in my previous letter, I believe Mr. Walston's suggestion to the effect that most of the machinery exhibits at the Royal Show could have been seen at smaller,...

Sia,—May I, both beekeeper and lawyer, join issue with Sir William Beach-Thomas on the subject of swarms and trespassing ? Since the case of Kearry v. Pattinson (1939 I All...

Sta,—Nostalgic memories flooded back as I read with great interest the eminently fair-minded article on Ethiopian Justice by Mr. F. Elwyn Jones, M.P. I think I may claim to be...

THE USE OF THE CLASSICS

Sta,—A young woman whom I taught a year ago for the second part of the Classical Tripos has since obtained a post in the Ministry of Civil Aviation which, to judge from a...

SnR,--One of the editors of the Petroleum Times has confessed in a recent issue that in his Review of Middle East Oil he did not succeed in making it clear that a certain oil...

SIR,—In your leading article of August 27th, entitled Communism and Peace, I was dismayed to find expression given to the idea that "Com- munism in Russia is Russia's own...

Snt,—In reviewing A Dictionary of English Church History in last week's Spectator, I said that exhaustive exploration had failed to bring to light any article on the Church...

SIR, —Is Janus, always rightly critical of slipshod English, to be per- mitted to say, "I have just been sent from Wellington a wrapper . . ." without remark? He had only to say...

Hourmouzios, like Mrs. Lambrides, has failed to find in the U.N. Committee's Report a single case of a parent whose child has been forcibly sent abroad. Further, his quotations,...

SIR, —In your editorial article, The Fruits of Lambeth, you state the Lambeth Conference denounced Marxian Communism as encouraging class warfare. " Warfare " against the class...

SIR,—" On what analogy, and with what excuse," asks Janus in your issue of August 27th, "can the termination 'er' be affixed to ' British ' ? And what would be the natural...

Technicolor •Soldier War as I Knew It. By General George S. Patton. (W. H. Allen. 18s.) THOSE of us Englishmen who were attached for a time to General Patton in France and...

IT is an interesting reflection that our present, astonishingly detailed knowledge of ancient Near Eastern civilisations is-the result of hardly more than a century's research....

No Heart in Nature

Father : A Portrait of G. G. Coulton at Home. By his daughter, • Sarah Campion. (Michael Joseph. 12s. 6d.) WHEN, in England especially, we are fond of people, we like them all...

Up From the Cinders

Men of Letters and the English Public in the Eighteenth Century. By Alexandre Beljame. Edited by Bonamy Dobree. Translated by E. 0. Lorimer. (Kegan Paul. 25s.) ALEXANDRE...

The Concerto. By Abraham Veinus. (Cassell. 165.) I'EtE cult of form for form's sake in music is an aberration by which musicologists are much more likely to be afflicted than...

IN the long run only the canvas matters, but in our initial acquaint- ance with the painter his work may lose nothing by being seen against a background of personality. With the...

Strait is the Gate. By Andre Gide. Translated by Dorothy Bussy. (Seeker and Warburg. 7s. 6d.) IT is pleasant to be reminded by the appearance of M. Camus's book that it is not...

[A Book Token for one guinea will be awarded to the sender of the first correct solution of this week's crossword to be opened after noon on Tuesday week September 141h....

A History of Attila and the Huns. By A. E. Thompson. (Oxford. 15s.) THE Huns aroused a peculiar horror among their contemporaries. Thousands and thousands of these ugly little...

By CUSTOS HAVE markets grounded and are they now about to stage a really worthwhile recovefy? This is the question which many people are asking themselves as a direct sequel to...