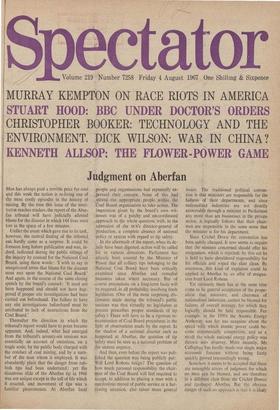 Man has always paid a terrible price for coal and

this weak the nation is re-living one of the Most costly episodes in the history of mining. By the time this issue of the SPEC- TATOR reaches readers, the report of the Aber-...

'Time is running out,' said Mr Ian Smith last weekend. He is wrong. It ran out long ago: when Mr Wilson allowed himself to be eon- inced (no doubt he did not need much con-...

Money down the drain

In his speech on parliamentary reform in December 1966, Mr Richard Crossman re- minded us that traditionally the House of Commons's functions had been the redress of grievances...

Portrait of the week Mr Macmillan decided to give up

grouse-shooting, and Wilfred Pickles gave up Have a Go. while Mr Heath fell off his yacht into the sea off Broadstairs. The Public Accounts Committee found that various projects...

CHRISTOPHER HOLLIS The parents of a primary school in Berkshire are demanding the dismissal of the headmaster because of the failure of their children in the eleven-plus...

POLITICAL COMMENTARY ALAN WATKINS It may happen that in twenty-five years' time the session of Parliament which has just ended will be regarded as one of great constitutional...

RUMANIA DEV MURARKA Bucharest—The real significance of Ceausescu's speech at the Grand National Assembly here last week was that it proclaimed the arrival of Rumania on the...

CHINA DICK WILSON 'I opened the lid of such a big cauldron,' Mao Tse-tung is reported to have remarked to his colleagues soon after the Cultural Revolution was launched. But it...

Thoughts on the present discontents

AMERICA MURRAY KEMPTON New York—lt has always been the essence of our ethnic struggles, whether exhilarating as they have occasionally been or depressing as they are again,...

DRUGS GILES PLAYFAIR The case of Robert Hugh Fraser, whose sen- tence of six months for possessing twenty-four heroin tablets has been upheld by the Court of Appeal, raises...

THE LAW R. A. CLINE In the last five years a remarkable number of leading members of the English Bar have de- fected to other professions. It would be an exaggeration to...

STRIX The conference was attended by several hun- dred people, most of them concerned with amenity. I never discovered what its terms of reference were. or if it had any, but...

THE ENVIRONMENT CHRISTOPHER BOOKER 'Why are the times so dark that men do not know each other, but governments move from bad to worse, as we see? The past was much better. Who...

TELEVISION STUART HOOD &It is fairly clear what Lord Hill's appointment as chairman of the sac means. By one stroke Mr Wilson has demonstrated that he recognises no...

THE PRESS DONALD McLACHLAN I must compile one of these days a list of the cups, inkstands, titles and other awards which are now waiting to reward courage or efficiency in the...

A TEACHER'S DAY-2 DAVID ROGERS 'Sir—'eard the one about the black man on the zebra crossing?' Mickey the Kid leans back, arms folded, a shaft of sunshine catching his Health...

From the 'Spectator.' 3 August 1867--It appears to be understood on all sides that the India House is arranging for an expedition to Abyssinia, to be carried out should Theodore...

PERSONAL COLUMN KENNETH ALLSOP I was a drug-addict—the hard stuff, not this niminy-piminy cannabis—for two years. I was in an almost permanent state of high. I had my...

The myth of Swift BOOKS

JOHN HOLLOWAY Those who care for good books ha‘e many advantages, from an inability to suffer boredom on long journeys to (one supposes) a sound edu- cation. But a certain...

ANTHONY BURGESS This book was, I think, written before The Bit Between My Teeth, which appeared early last year. Its British publication seems to have been held back until the...

DEREK PATMORE A Choice of Browning's Verse selected with an introduction by Edward Lucie-Smith (Faber Paper-covered Editions 9s 6d) It is about time that one of the younger and...

PETER VANSITTART The Albigensian Crusade Jacques Madaule (Burns and Oates 30s) The Albigensians have not lacked attention in recent years. In general, their tragedy prob- ably...

EMYR HUMPHREYS He had a short memory And this was his greatest asset. In winter he had no clear recollection of spring. Each time the straight rain pierced the air He studied...

CLEMENT CRISP All unwittingly, and with a nice disregard for the digestions of its aficionados, British ballet has been putting on a festival in London during the past two...

Cut price Bond IIILARY SPURLING The Happy Apple (Hampstead Theatre Club) Robert Shaw's The Man in the Glass Rooth is a bold, if risky and as it turns out unwise, attempt to...

RECORDS CHARLES REID Wagner's Tannhauser has a subtitle, 'The Song Contest on the Wartburg.' In the record shops the contest now creeps at your wallet. Five years ago HMV put...

Steel and the rate of interest MONEY

NICHOLAS DAVENPORT By issuing a short-dated bond—Treasury 6+ per cent 1971 at 991—to the expropriated holders of steel the Chancellor in the Stock Exchange view 'took the...

CUSTOS The Government broker having announced that he would buy the new steel stock at 991, that is, I below its issue price, a good turnover followed and it was thought that...

CONSUMING INTEREST LESLIE ADRIAN It may not be bingo for the jerry-builders, but 1 August this year will be remembered as the day the gamblers in bricks and mortar were beaten...

JOHN BULL An important unit in the textile industry has decided that links with Imperial Chemical In- dustries are more of a hindrance than a help. I refer to Viyella...

The future without the past

Sir: Dr J. H. Plumb (28 July) appears to be s ceptical about the value of the biologist in g the problem of man and his environ- ment. And men are neither animals nor birds.'...

Why we hate the Tory party

LETTERS From Leonard Cottrell, Simon S. Lilley, Stephen Cook. Professor H. C. AfcLaren. I. C. Simpson. I. H. Priilove. Sir: I am sure that all your reactionary, tradi-...

Sir: May I be permitted to congratulate Dr Rowan Wilson on his scholarly appraisal of the use of cytology, jn his essay 'Women at risk' (28 July)? As he states. one...

JOHN WELLS Canon Hugh Montefiore's suggestion last week that Christ may have been a homosexual seems to have caused only a slight flutter in the ecclesiastical hen loft. No one...

Votes at eighteen Sir: As one of the many short-haired,

non- marijuana-smoking eighteen year olds in Britain today, I was disgusted by the cartoon on page 96 of the SPECTATOR (28 July). Contrary to what Heath. the cartoonist,...