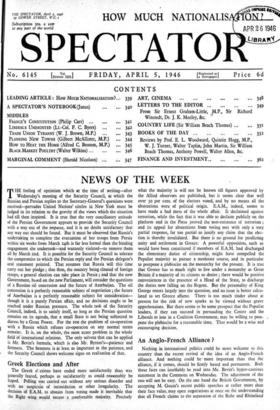 Greek Elections and After

The Greek el 'ctions have ended more satisfactorily than was generally feared, perhaps as satisfactorily as could reasonably be hoped. Polling was carried out without any...

T HE feeling of optimism which at the time of writingâafter Wednesday's meeting of the Security Council, at which the Russian and Persian replies to the Secretary-General's...

Nothing in international politics could be more welcome to this country than the recent revival of the idea of an Anglo-French alliance. And nothing could be more important than...

The Atom and Industry

The report of the committee set up by the United States Govern- ment to examine the international control of atomic energy and last week's debate in the House of Commons...

The atmosphere of panic in which food questions have been discussed since January is at last clearing. The Commons debate which is due to take place as The Spectator goes to...

By flogging the committee-stage unnecessarily through an all- night sitting the Government has got its Trade Disputes Act through the Commons, and much though the Lords may...

The Foreign Secretary's announcement of the immediate opening of negotiations with Egypt for a revision of the 1936 Anglo-Egyptian Treaty of Alliance is welcome. So is the news...

ATIONALISATION of industry and trade has not yet gone 11 far enough to disturb the daily life of the common man. In the absence of concrete evidence of its benefits or real...

* * * The Parish Council elections at the end

My reference to a recent visit of Members of Parliament

to Heathrow, or London Airport, brings me from beyond the Tweed the question, Why not a similar visit to Prestwick? Why not"

In being permitted to resign his office as Justice of

the Peace after the severe strictures passed on his conduct by Mr. Justice Tucker, Mr. Howard E. Steavenson, Chairman of the Gilling East (Yorkshire) Bench, may be considered to...

The well-informed writer who carries on the " Atticus "

tradi- tion in the Sunday Times raises rather an important issue in con- nection with the appointment of Sir Arthur Street to the Vice- Chairmanship of the National Coal Board....

One of the tasks of U.N.E.S.C.O. (the United Nations Educational,

Scientific and Cultural Organisation) will, no doubt, be to increase and develop cultural ties between nations. Meanwhile, a good deal can be done in that direction by bilateral...

I N June, 1945, Sir Malcolm Robertson resigned the chairmanship of the British Council. By now, April, 1946, the Foreign Office has got so far as to say it will soon be in a...

Nothing has surprised me more in the last fortnight than

the failure of the publication of the National Health Service Bill to produce any sign of the public controversy that was confidently threatened while the Bill was still...

By LT.-COL. F. C. BYERS, M.P. R ENEWED interest has recently been manifested in the activities of the Liberal Party and reasonable speculation as to whether it can after all...

By W. J. BROWN, M.P. T HERE is a saying that, if you wish to know what a young woman will look like twenty or thirty yeari hence, you should have a look at her mother....

By GILBERT McALLISTER, M.P. W HEN Lord Reith, the Chairman of the New Towns Com- mittee, whose interim report has just been published, became Minister of Works and Planning he...

HOW TO HEAT THE HOME

By ALFRED C. BOSSOM, M.P. AL RCHITECTS and engineers, City Fathers and local authorities, and equally all women's organisations, should consider and discuss the Report on our "...

By WALTER WILKINS T HE question of the poultry black market lately cropped up again in the Commons. The usual evasive action was taken ; the matter was " under discussion," but...

By HAROLD NICOLSON I T is salutary, I suppose, to abandon at moments all pretence of being rational and to surrender ourselves without reproach to the delights of infantilism....

" The Seventh Veil." Revived at the Tivoli.â" The Postman Always Rings Twice." At the Empire. I WAS overseas when The Seventh Veil was released, and it was an interesting...

The Lyrical Trend in English Painting. At the Roland, Browse and Delbanco Gallery. THIS is another of those elegant loan exhibitions which are becoming a pleasantly familiar...

IF LOVE WERE BURIED IN A GRAVE

If love were buried in a grave Below the level of the heart And nothing took the sunlight save Compassion, love's poor counterpart ; A thought, a breath, still unresigned To...

The dental profession has been, and is now more so, in need of skilled assistance and qualified ancillaries for the treatment of minor dental affections and for the...

SIR, -My experience as a panel doctor has been quite different from that of your correspondent Dr. Taylor. Last year was the cheapest year's motoring I have ever had since 1929...

" ORGANISING HEALTH " Sut,âSince with your characteristic bias towards Socialistic legislation as far as the medical profession is concerned you have extolled the merits of...

SIR,âMy attention has been drawn to an article in your

issue of the 15th March, on which I would ask your permission to comment. The Report of the Interdepartmental Committee on Dentistry, faced with a critical shortage of dentists...

SIR,âThe behaviour of American troops in Europe as described in an article in a recent issue of The Spectator will not come as a shock even to Americans. Life, the weekly...

hope you will publish this appeal from a soldier in B.A.O.R. for an attitude of greater realism on the part of British public opinion and the British Government (who are at the...

Sta,âMrs. Margaret Keynes is tight that it is want of

imagination which allows the people of Britain to acquiesce in the starvation rations now current in the British zone in Germany. If people would try living on less than half...

SIR,âIn my former letter for " prisoners of war "

should be read " wood- cutters." A lapses calami ant mesnoriae for which I apologise.âYours,

SIR, âIf, as your correspondent " Changi " implies, the creation of a Malayan Union were a punitive measure, I should not quarrel with the Government, provided it adduced...

THE news that Knutsford is to be converted into a model township will send most minds on a quick journey to Cranford and Mrs. Gaskell. Though I have been familiar with the...

In My Garden Some excellent vegetables, as well as apples,

are unworthily neglected. I am told that the Dutch brown bean was quite unknown in England till 1915, when some seed was sent to the great Mr. Wilkes from Holland, and he was so...

SIR,âI cannot agree with Mr. Ward's opinion that forests do not largely affect climate. If he had known the Riviera as long as I have he would see evidences that they do....

SIR,âI must protest at having my name dragged into a correspondence in your paper covering parcels from America. Mr. Wedderburn in his letter in a recent issue makes the...

Bridget Rediviva A budget of letters on that precious apple

" Scotch Bridget " compels a further reference. One correspondent reports that his father grew the variety 6o years ago in Lancashire, and that he had not heard of it again till...

SIR,âIn one of your issues last August you said that man for man the Caretaker Government was stronger than the new Labour Government. I should now like to inquire whether,...

Sik,âWhateven is your object in publishing a piece of writing in your issue for March 22nd entitled "Nature and Character," by W. J. Turner? It is certainly not poetry,...

SIR,âMay I correct a statement made in this article in your last number? It was not the Bishop of Bradford who suggested a ten years' holiday for scientists, but the Bishop of...

Botanists as Poets Botanists are sometimes very bad poetsâwitness the

lamentable verses written ad hoc for the else delightful Anne Prattâbut Lord de Tabley (who became a leading authority on the endless varieties or species of the blackberry)...

Some Proposals for Constitutional Reform, Being the Recom- mendations of a Group of Conservatives. (Eyre and Spottiswoode. 7s. 6d.) ONE of the very many advantages of...

Lord Acton Acton : The Formative Years. By David Mathew. (Eyre and Spottiswoode. 10s. 6d.) MOST works written about the first Lord Acton have been severely academic. They have...

GIAMBATTISTA Vico occupies a key place in the history of philosophy. He lived, mostly at Naples, from 1668 to 1744, a period which saw the first reaction from Descartes's...

BOOKS about great musicians are in general very bad ; especially those written in recent times, for it is notable that in the case of the older masters the earlier a biography...

The Development of the Legislative Council, 1606-1945. By Martin Wight. (Faber and Faber. 10s. 6d.) BEFORE the publication of this book no one could be blamed for thinking that...

WITH consistent dogmatismâjustified in part by the length and thoroughness of the survey they organisedâLord Astor and Mr. Seebohm Rowntree urge a revolution in British...

WORTHINESS, aullness : how often does the one quality imply the other! The novels under review, while they do not insult the intelligence, certainly do not quicken the, spirit...

The True Story of Dick Whittington. By Osbert Sitwell. (Home and Van Thal. 5s.) A MEDLEY of satire, fantasy and poetic description is provided by the new Dick Whittington " long...

SOLUTION TO CROSSWORD No. 367

one guinea will be awarded to the sender of the first correct solution of this week's crossword to be opened after noon on Tuesday week, April 16th. Envelopes must be received...

By CUSTOS WITH the Budget looming close ahead stock markets are behaving in the way one would naturally expect. Whatever benefit has been derived from the temporary relaxation...