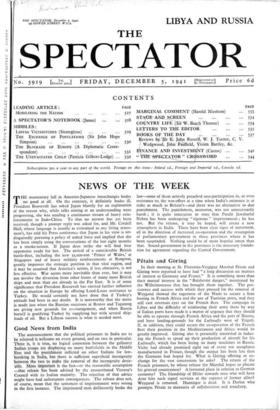 T HE momentary lull in Americo-Japanese interchanges bodes no good at all. On the contrary, it definitely bodes ill. President Roosevelt has asked Japan bluntly for an...

In their meeting at St. Florentin-Vergigny Marshal Main and Goring were reported to have had "a long discussion on matters of interest to Germany and France." It is something...

The announcement that the political prisoners in India are to be released is welcome on every ground, and on two in particular. There is, it is true, 'no logical connexion...

The Future of South-Eastern Europe

Speaking at the • Yugoslav Union celebrations last Monday Mr. Amery said that the Serbs, Croats and Slovenes would need unity after the war not only with orie another but with...

Health in the Factories

War compels the State to look into many social defects which, injurious and wasteful in time of peace, are seen to be intolerable in time of war. One of these is the loss of...

Minorities and the Peace

No more difficult question will arise under the peace-settlement than that of the treatment of racial and religious minorities in different European countries. It arose in 1919...

Ribbentrop's Lie About Russia In his speech in the House

of Commons last week Mr. Eden took the opportunity of nailing down a Nazi lie repeated by Ribbentrop in his after-luncheon speech to the quisling politicians assembled for the...

The Imperial troops in Libya are now for the first time engaged in a major battle with Germans on land without the disadvantage of _inferior equipment. They have superiority in...

The Role of Science

Behind the men who are fighting lie the producers' of machines, and behind them is the army of scientists. The scientists of this country have been mobilised for the purposes of...

r N the careful marshalling of facts which he put before the I House of Commons on Tuesday the Prime Minister passed from the general to the particular—from the blood, tears,...

There are, of course, pitfalls in this lecturing business. A

distingnished authority went down to the provinces to talk to the troops on Russia (not, I think, under A.B.C.A.). He thought a film would enliven things, and ordered one...

Lord Simon, in his Sir John Simon days, once told

the House of Commons that though it might be difficult to define an elephant most people knew one when they saw it. That is broadly true of vulgarity,—a reflection inspired by...

The criticism in this column last week of the system

of " recommendation-letters " still employed by a small number of established charities (I see that the Royal Hospital for Incurables has just published the results of it last...

America. For years past many such, in par- ticular men like Sir Frederick Whyte, Sir Norman Angell and Mr. S. K. Ratcliffe, have been doing invaluable service in keeping the...

I have been asked to discuss again the question of

NOTEBOOK IF HAVE been making some enquiries into the working of A.B.C.A. I —the recently-created Army Bureau of Current Affairs—about which, in the first instance, I admit I...

By STRATEGICUS I T is now evident that the battle in Libya can only be described in detail with the almost complete certainty that the account will be accurate only for the...

OF POPULATIONS By SIR JOHN HOPE SIMPSON* A FTER the war of 1914-18 the frontiers of States were so drawn as to eliminate the problem of minority-groups where that was...

THE BLOCKADE OF EUROPE

By A DIPLOMATIC CORRESPONDENT B Y Germany's own acts, in her occupation of the greater part of Europe and her declaration of war on Russia, what began by being a blockade of...

THE WAR BEGINS TO TROUBLE: A DETACHED OLD TREE

THEIR wounds are mouths, and I am alone here listening. It is not my heart that bleeds ; an ample tide Wells mortally from the unbefriended side Of thousands massacred for...

By PATRICIA GILBERT-LODGE T HE scene might be any shelter in London within the last few months. "Have you ever thought of sending them to the country?" I asked, patting the...

Sir Irving Albery and Sir Archibald Southby did not push

their amendment to a division ; to do so would have been to challenge a vote of confidence upon the whole conduct of the war. But it was clear enough that they had behind them a...

I recommend those who are unimaginative about internment to read

that remarkable book Time Stood Still, by Paul Cohen Portheim. It must be obtainable at any well-stocked library. Portheim was the most international person that I have ever...

By HAROLD NICOLSON KNEW an artist once who lived in Dahlem, a suburb of I Berlin. He was a happy little man with a round pink face and gold spectacles ; he had a disconcerting...

I am proud that the House of Commons should in

this difficult question have proved itself so humane and so alert. For months past there have been several members (and notably that fine pugnacious woman Eleanor Rathbone) who...

I am not, I trust, unduly sentimental on the subject

of intern- ment. The denial of liberty is one of the greatest ills which man can inflict on man, and so many of these unhappy men and women have been imprisoned for no sin. It...

Disturbed Sleepers Certain oddities of weather over the last two

or three weeks have exercised their influence on a number of animals. A friend who has a very lovely and spacious garden in the Garden of England has seen his lawn reduced to...

In the Garden Those of us who try our hand

at growing the rarer vegetables seldom continue the good work. We find some snag or other. The kohl rabi is stringy and tough (generally because gathered too late); the...

"Ducks and Drakes." At the Apollo. AN amusing play and a brilliant cast. And who would grumble if, after having laughed continuously through three acts, reflection prompted...

While the wholesale destruction of deer—by driving not stalking —is being urged, the presence of a deer that is not red or roe or fallow has became generally known through the...

"Sergeant York." At Warner's. "Three in a Shell-Hole." Generally released. THE American sharpshooter whose story is told in Sergeant York did in actual fact kill twenty...

Leys One of the words most frequently used in rural England—or at least among farmers—today is Ley ; but for some unknown reason it is not to be found as a substantive in even...

should like to endorse what you say under "News of the Week" in The Spectator of November 28th about boys' wages. The high wages that boys on leaving school can get at the...

LETTERS TO THE EDITOR FACTS ABOUT FRANCE

Sia,—Mr. Max Beloff quotes figures of French industrial production to oppose a statement I made, in a recent review that the Popular Front sapped the productive capacity of the...

THE UNRECRUITED WOMAN SIR,—The writer of the leading article in

your issuc of November 14th headed "The Unrecruited Women" expresses surprise that the women Members of Parliament have not taken a more active part in calling attention to the...

RECOMMENDATION-LETTERS SIR,—Your notes on the methods of the Royal Surgical

Aid Society will have the wholehearted support of social workers throughout the country. Apart from the waste of money in postage and stationery by people too poor to obtain the...

Sig,—" Janus's " criticism of the "Letter" system as practised

by the Royal Surgical Aid Society is fully justified, and I hope it will bear fruit. I have often come across applicants to the Society who had found it impossible after many...

Sin,—In his letter printed in your issue of November 28th Mr. Field has, I venture to say, missed the point of my article "The Problem of Prussia." The point is that, within the...

SIR,—It would, I think, be helpful if we could have

a lefinite assur- ance that seamen's lives are not imperilled by bringing paper pulp to this country which is used for the production of such books as those described in The...

Srg,—I write to draw your attention to the Government's latest attempt to exterminate the small trader and quote my own case as an example. I am an ex-Service man 46 years of...

SIR,—After reading Mr. Wadsworth's letter I inspected my own fruit, and out of 112 fruit contained in five tins I found that six had become softish, but on cutting them across I...

SIR,—Various organisations responsible for supplying power and fuel have been circulating a form asking people to pledge themselves to do everything they can to save coal, coke,...

SIR,—From correspondence we have received on the subject since your article on "Pornography and Paper" by Ronald W. Clark was published in your issue of November 21st, it would...

SIR,—I note that in practically all correspondence and articles dealing with this subject it is taken for granted that the scheme originated in Gordonstoun School, Morayshire....

Rural Reconstruction THE past 50 years have seen more profound changes in British agriculture than any period of the same length throughout its whole history. Sir Daniel Hall...

MR. GIUSCOM was American Minister to Persia in 1905 at the early age of 28, and subsequently to Japan ; then American Ambassador to Brazil and to Italy. Few diplomats can have...

The Mystic and the World

Grey Eminence. By Aldous Huxley. (Chatto and Windus. 155.) WHAT exactly is this new book of Mr. Huxley's? Described as a biography on the dust cover and as a "study in religion...

THE CONSOLIDATED GOLD FIELDS OF SOUTH AFRICA, LIMITED THE ordinary general meeting was held on Thursday, December 4th, at the Chartered Insurance Institute at 12 noon. The...

By CUSTOS ONE has grown so accustomed to the leadership of gilt-edged in the stock markets that it is a little surprising to find equity shares not merely stealing the...

New Pocket Cartoons. By Osbert Lancaster. (John Murray. 2s. 6d.) THE love of laughter is as sensible as it is general, for laughter like sneezing relieves tension and clears...

WEEK-END books are always popular, and most popular of all when found in the guest's bedroom on the bedside bookshelf. They are full of practical matter, but whether they are...

ROYAL BANK OF SCOTLAND THE CHAIRMAN'S REPORT THE annual general court of proprietors of The Royal Bank of Scot- land was held at Edinburgh on Wednesday, November 26th, 1941....

Token for one guinea will be given to the sender of the first correct solution of this week's crossword puzzle to be opened. Envelopes should be marked with the words "Crossword...

SOLUTION TO CROSSWORD No 141