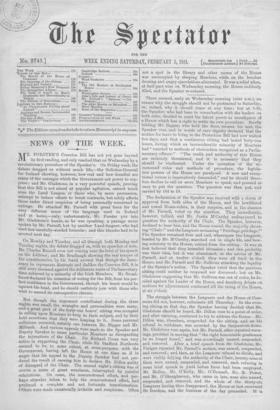 The declaration of the Speaker was received with a storm

of approval from both sides of the House, and the bewildered and cowed Home-rulers, in their surprise, and in the absence of Mr. Parnell, voted on the question. They...

There seemed, early on Wednesday morning (nine a.m.), no reason

why the struggle should not be protracted to Saturdliy, or, indeed, why it should cease at any time ; but at 9.30, the Speaker, who had been in consultation with the leaders on...

But though the argument contributed during the three nights was

small, the wrangles and personalities were many, and a great part of the forty-one hours' sitting was occupied , in calling upon Members to keep to their subject, and by their...

On Monday and Tuesday, and all through both Monday and

Tuesday nights, the debate dragged on, with no speeches of note, Mr. Charles Russell even not coming near the level of his speech 'on the Address ; and Mr. Bradlaugh showing the...

' 0 * * The Editors cannot undertake to return3fanuscript in any case.

The struggle between the Leaguers and the House of Com-

mons did not, however, culminate till Thursday. In the even- ing sitting on that day, the Speaker having decided that Mr. Gladstone should be heard, Mr. Dillon rose to a point...

M R. FORSTER'S Coercion Bill has not yet gone beyond its first reading, and only reached that on Wednesday by a revolutionary procedure of the Speaker's. On Friday week, the...

Pretoria has failed. His force, barely a thousand strong, reached. Laing's Nek, the dangerous point of the pass over the Drakensberg, on the 28th ult. Here the Boers were found...

Sir Stafford Northcote followed, in a speech of great gener-

osity and force, supporting Mr. Gladstone, with a touch of personal enthusiasm that was very noble in the Leader of the Opposition, and limiting his criticisms to the...

When the gauntlet of all the Irreconcilables had been at

last run, Mr. Gladstone moved his resolution pro- posing to put the absolute control of the proceedings of the House into the hands of the Speaker, on any occasion on which, the...

The form in which the House of Commons eventually carried

the ciedure, after its amendment by Sir Stafford Northcote, Mr. Dillwyn, and the Independent Members generally, was as follows If, upon notice given, a motion be made. by a...

It seems clear that Sir G. P. Colley, an officer

of great ability, whose experience has been gained in fighting half-civilised races, like most such officers, underrated a white enemy not in uniform. The Boers, though...

Mr. Childers on Monday answered two questions on the Transvaal

war very satisfactorily. He had instructed Sir G. Colley to treat the Boers as belligerents, though without rais- ing the question of belligerent rights, and had received from...

The French Chamber on Thursday decided for peace in an

emphatic way. M. Proust moved a resolution condemning M. Barth(Remy St. Hilaire for not making the action of France decisive upon the Greek question. Ho was answered by the...

The Evangelicals have put forth their reply to the memorial

for greater latitude and tolerance in ritual, in the shape of an address to the Archbishop of Canterbury, signed by Bishop Perry, now Canon of Llaudaff ; Bishop Ryan, of St....

The Censors of the College of Physicians have, according to

the British Medical Journal, published their award concerning Dr. Pavy's absurd complaint against Sir William Gull, for giving on the inquest some months ago at Guy's Hospital,...

in relation to the trust-deed of an Independent chapel at Huddersfield. The trust-deed lays down that the chapel is for the teaching of certain Calvinistic doctrines, of which...

Prince Bismarck is beginning to take his long promised "

steps " for the advantage of the proletariat. The first is only a Bill, now before the Federal Council, for making insurance against accident compulsory on all masons, miners,...

On Tuesday night, Mr. Whymper gave at the Royal Institu-

tion a very amusing account of his ascent of Chimborazo and Cotopaxi. At the top of Chimborazo his party found the wind blowing at the rate of fifty miles an hour from the...

invented—from paralysis, and he will be frankly supported The qualities

demanded of the Speaker in the final by all that is sound. in the opinion of the three countries. He scene, that of Thursday evening, so unprecedented and.. discerned the...

T HERE was probably never a moment in the history of the country at which it was more important than it now is that England and Ireland should take a calm reckoning of their...

THE CARRYING OF THE CLOTURE.

T HE events of Thursday night will make almost every inhabitant of Great Britain, and a very large minority of those of Ireland, breathe more freely, and enable them to recur...

T HE German rumours on which we commented in our issue of October 9th last were correct, and Prince Bismarck has offered the proletariat of Germany a concession which, in...

IT was to be expected that the Dean of St. Paul's address to the Archbishop of Canterbury would call forth a counter- address. Toleration is seldom a popular virtue, and its...

THE DUKE OF ARGYLL ON MAN'S CONTINUITY AND DISCONTINUITY WITH

NATURE. I N the February number of the Contemporary Review, the I Duke of Argyll indicates the characteristic relation of Man to the Unity of Nature, as suggested by study of...

THE FELICITY OF NATURALISTS. T HERE is something very charming, especially

to sedentary persons, in a sketch such as that of Mr. Frank Buckland', which has just appeared in Macmiflam, from the pen of Mr. Spencer Walpole. It is not that the sketch is at...

"AN UNEXPRESSED FEELING ABOUT IRELAND." [TO TIM EDITOR Or TER " FIPTIOTAVOR.") Saar — Nothing has ever made me so realise the sad gulf between England and Ireland as the perusal...

ANGLICAN AND ROMAN SACRAMENTAL TEACHING. [TO TSB EDITOR Or THE

" srseratea."] Sfa,—I have a great dislike to discussing these sacred subjects in the columns of a newspaper, but I cannot allow Mr. Archer Gurney's letter, which appeared under...

THE ISLE OF MAN.

[To MR EDITOR OF TED esrsorkroa..] Sut,—I cannot agree with your correspondent, Mr. Stephen, that the landing arrangements in the Isle of Man are "as satisfactory in every...

[TO THE EDITOR OF THE "SPECTATOR:] SIE,—I have just seen a letter which appeared in the Spectator of January 22nd, concerning the " Virgin's Cradle - Song," quoted by you in...

[To THE EDITOR OF THE " SPECTATOR:I Sig, - I entirely agree that the Headships at Cambridge should be abolished. All our Master did, in my time, was to preach and celebrate the...

ITO THE EDITOR OF THE " SFECTATOR."] SIR,—While fully admitting the necessity which was laid upon the Government of repressing crime in Ireland by exceptional measures, I...

Cease for one moment thy complaining dreary, And tell me if thou art not sad and weary, And if thy travel is not long and eerie,- 0 wild and woeful wind! 0 houseless, homeless...

THE OLD MASTERS AT BURLINGTON HOUSE. [GENERAL VIEW.] THE exhibition is one of fair, general interest, though it is not rich in any individual particular, as most of the former...

WASHINGTON SQUARE.* WE observe that Mr. Henry James speaks of all those three corn- positions as " tales." This is a somewhat liberal use of the word. The principal of the three...

JEANS' "LIFE AND LETTERS OF CICERO."* Tins book, as the

title-page duly and properly declares, is nothing more than " a new translation of the Letters (of Cicero) included in Mr. Watson's Selection;" and "Mr. Wat- son's Selection of...

[FMST NOTICE.] Ix many respects, this book stands unequalled in English literature, as an account of the life and philosophy of Spinoza. It is exceedingly able, and most...

to be expelled universe, on an emergency, can take refuge

like common people The author opens his attack with an argument so irrelevant in an instinct. If the statement of Professor Clifford had been that it seems strange to us that so...

NOVELS are frequently taken up with the intention of skipping from page to page, reading a few words hero and there, and thus skimming the cream of the interest. But whoever at-...

SOME OF THE MAGAZINES, THE Magazines are full of notices

of George Eliot, all more or less appreciative,—Blackwood recounts the history of her first appearance in literature ; the Cornhill publishes a most keen and, as we think,...

Burbidge, who is connected with the Botanical Gardens of Trinity College, Dublin, visited Borneo and the Islands of the Sulu Arehi- pelage, for the purpose of collecting new...

Albania ; a Narrative of Recent Travel. By E. F.

Knight. (Samp- son Low and Co.)—This is one of the most entertaining books of travel that we have soon for a long time. Mr. Knight and his com- panions visited Montenegro,...

Oates.)— This is a religious novel, written from the Roman Catholic stand-point. In place of characters, Mr. Dering uses talking automata, and his hero, Everard Freville, is a...

is a pleasant novel (one part excepted, where one of the heroes makes love to the other hero's wife), of the "agreeable rattle" kind. Each of these two young gentlemen marries a...

and Co.)—Somo of our readers will probably have made acquaintance with this tale when it first appeared in the pages of " Good Words but we may briefly indicate our opinion of...

The Ingoklaby Lyrics, By Thomas Ingoldsby, Esq. Edited by his

Son. (Bentley and Son.)—Much of the humour of these verses has inevitably evaporated. The allusions convey no meaning to the ear of this generation. Yet much remains. Mr. Barham...

Sunlight and Shadow ; or, Gleanings from My Life - Work. By

John B. Gough. (Hodder and Stoughton.) —Mr. Gough would not be pleased, if we were to recommend that this volume should be read, even where it deals with the question of total...

NOVELS.—Dimplethorpe. By the Author of "St. Olave's." 3 vols. (Horst

and Blackett.)—The hero of this novel should by rights boa lad of artistic ability, who, taken up by the Dissenting minister of his town, prospers in his vocation, obtains a...

Stoughton sketches the lives and characters of seven- teen men of science, beginning with Roger Bacon, and ending with Main Sedgeviek (and not one of the seventeen is more...

book as "a practical manual for engineers in charge of stationary engines." He is favour- ably known for his endeavours to benefit, by raising the standard of qualifications,...

The speciality of Sonnenschein and Allen's Royal Relief Atlas (W.

Swan Sonnenschein and Allen) is sufficiently indicated by its title. It contains thirty-one excellent maps of the principal countries of the world, in which the mountains and...

by Sir Bernard Burke, C.B., LL,D., Ulster King-of-Arms. (Harrison.)—A glance at the table of contents of this elaborate compilation shows that the author earnestly endeavours to...

e--We do not know whether John Wesley's position could be bettor described than it is by a sentence which Me. Urlin quotes from Mr. Tyerman's biography, "a hearty Churchman,...

The Australian Handbook, and Shippers and Importers' Directory. (Gordon and

Goteh.)—This is the twelfth annual edition of a valuable commercial work, the title of which sufficiently indicates its scope and usefulness. It is furnished with maps of the...