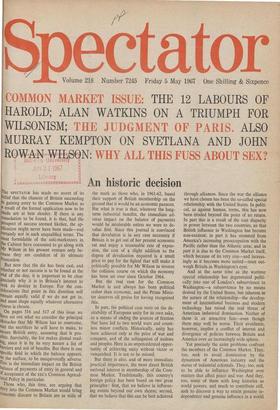 The SPECTATOR has made no secret of its elief that the chances of Britain succeeding in gaining entry to the Common Market as a result of the formal application now to be ade...

The destruction of the president

The war in Vietnam has entered a new, critical and alarmingly dangerous phase. It began some time after the failure of the series of efforts in the new year—the short truces,...

Ballad of the sun

CHRISTOPHER IIOLLIS After G. K. Chesterton 0, well for him that reads the Sun. Shall the Sun stop for anyone? Although the Herald's dead and done, The Sun has come to stay....

POLITICAL COMMENTARY ALAN WATKINS Shortly before the series of Cabinet meetings on the Common Market, Mr Harold Wilson ad- ministered a gentle rebuke to his colleagues. There...

The twelve labours of Harold Wilson

AMERICA MURRAY , KEMPTON New York—It is curious _that two women , who have addressed the must uncomplicated appeal to the domestic sentiments of Americans in the last eight...

FRANCE MARC ULLMANN Paris—When on Wednesday French ministers gathered at the Elysee Palace, as they do at 10.15 every Wednesday, the official announce- ment of the British...

TIIE PRESS DONALD McLACHLAN May I recommend that editors rescue from the news-room spike or the literary editor's table the Rode Lecture given last week at Cambridge called...

From the 'Spectator,' 4 May, I867—Lord Derby and Mr. Disraeli received two deputations on Tues- day in support of their Reform Bill. Disraeli described his measure to some...

THE LAW R. A. CLINE In 1924 Macmillans the publishers brought proceedings in the High Court to protect their copyright in educational textbooks which were being printed in...

SPECTATOR'S NOTEBOOK No one who loves Greece can fail to feel the deepest anguish at the successful seizure of power in Athens by yet another military dic- tatorship, and at...

CONSUMER'S GUIDE TO THE PROFESSIONS-9 DANIEL HOWARD I suppose that the great difficulty for the layman in choosing a professional to advise him is that, by and large, the...

Why all this fuss about sex?

PERSONAL COLUMN JOHN ROWAN WILSON When men develop increasingly elaborate and complex rituals in relation to some form of activity it usually means that they are not very sure...

BOOKS C. B. COX When in 1948 T. S. Eliot was leaving for Stockholm to receive the Nobel Prize, an American reporter at the airport asked him: 'Mr Eliot, what book did they...

J. H. PLUMB Edmund Burke is both a historical figure and a living tradition, a situation which would have delighted so complex, so devious a per- sonality. The cult of Burke...

Smarty Petrel : The Life and Work of Maxim Gorky

Dan Levin (Muller 30s) -r. Anti-writer RONALD HINGLEY Gorky is arguably the leading Russian anti- writer : that is, he developed the art of writing badly to a point beyond the...

PATRICK ANDERSON Downhill All the Way Leonard Woolf (The Hogarth Press 35s) Honesty about oneself and one's friends was a prime virtue amongst the Bloomsbury group of writers....

PENELOPE HOUSTON As an idea for a movie, the most and the least one can say about Peter Watkins's Privilege (Warner, 'A') is that it has possibilities. The time is the near...

ART PAUL GRINKE Looking at the art of this century it sometimes helps to peg the wayward fluctuations of taste and style on to certain exhibitions. With his- „ torical...

MANUSCRIPTS HENRY TUBE Whither poetry? is not a question many of us are asking ourselves in the bath these days. Pressed for news of its whereabouts, we might cast about for...

NICHOLAS DAVENPORT When Keynes was trying to teach governments in the 1930s how to spend their way out of massive unemployment he had never thought of asking them to build new...

CONSUMING INTEREST LESLIE ADRIAN Well, claret-lovers everywhere, the game is up for some of us. Put your vintage chart away (it never matched the waiter's, anyway), Château...

CUSTOS The equity share markets recovered quickly from their sharp short fall last week. The main reason was the Government's announcement of 28 July as the steel vesting day,...

A quiet time ahead ?

Sir: Are we in for a few years of quiet

politics 'because of Europe,' a neutralisation of domestic politics and the reverse of Mr Wilson's 1964-66 tactics, as Alan Watkins suggests? From the sidelines perhaps I am...

Sir: The Medical Termination of Pregnancy Bill is nearing decision. The object of the Bill is to modernise and clarify ill-defined law. One could expect it to comply with three...

Sir: 'You are old, Father William, the young man said, You are old and remarkably fat, And yet you repeatedly stand on your head, Pray what is the reason for that?' In Alice in...

Sir: Why all Ihis fuss about America poaching on our physicians and surgeons after they have been trained at our expense in the medical faculties of our universities? Is not, as...

Sir: May I endorse Mr Playfair's plea (28 April) for a pleasing pronunciation of our language, which demands it? French may produce a mono- tonous effect upon the ear. But...

Sir: Someone must protest at the eulogising of Ernest Bevin, which has reached disgusting proportions in reviews of the second volume of Mr Bullock's biography. Mr Desmond...

Sir: I should like to endorse Mr Stuart Hood's complaint (21 April) that 'every evening we see on our screens film or tape which is the stuff of history, material which, if...

AFTERTHOUGHT Miriam Pill-Willoughby writes from Istanbul: It is, alas, but rarely nowadays that my husband and I forsake the windswept fastness of 'Le Cabinet,' our disused...

Across 1 Bowler-hatted canine with an academic air (7) 5 Inherent reproachful question from a racing dog? (7) 9 Mr Wright, the brotherly type (7) 10 Where the beak might hold...