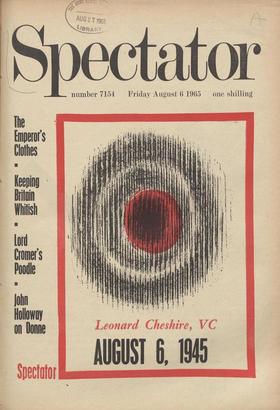 Portrait of the Week— THE NOTE OF THRIFT, not to

say parsimony, which has been creeping into governmental pronounce- ments was made manifest by a spectacular fall of k50 million, if not twice as much, in gold reserves l ast...

Keeping Britain Whitish HE White Paper on immigration must be one 1 of the most unedifying documents ever to come out of a British government office. One doubts if it could be...

The Future of Parliamentary Privilege LAIN MACLEOD • Verwoerd and After ARNOLD BEICHMAN • Box Populi STUART HOOD One year's subscription to the 'Spectator': £3 15s....

The Intellectual Revolt SARAH GAINHAM writes from Bonn: Artistic talent usually dislikes power and those who hold it, so when writers interfere in politics they are usually...

Observermess CH RISTOPHER BOOKER writes : lT Would have been .a curious enough week for th e heavy Sundays anyway. What with the S unday Telegraph leading its front page on the...

Lord Cromer's Poodle By ALAN WATKINS The late Dr. Butler had a singular notion respecting large communities in his garden, in the darkest night which the time of year could...

Ban the (other) Bomb

of note. Whether they be regarded as a promise or a Warning for the rest of London, seem worthy C ERTAIN 'improvements' are now on view at Turnham Green underground station...

M ANN' political commentators, and especially the BBC, made a meal out of the reluctance of Tory MPs to follow Mr. Wilson in the 'broken promises' censure debate. True, the...

Return of an Exile

From DREW MIDDLETON WESTPORT, NEW yOl t/ ' rrran war that flickers and splutters, in the I jungles and villages of Vietnam has reached halfway across the world to touch the...

Mr. H. Wilson must not think that, just be- cause 'he absents himself from a censure debate to appear on Gallery, Quoodle's beady eye is not fixed on him. I follow him very...

Take no notice of those who cry that this is hardly the time for talking about increasing Bri- tish aid. Mrs. Castle is not talking about that at all. She promises no immediate...

Ray's arguments. Lots of people wrote in, and they confirm me in my view that piPe ) are thought to be non-U. All of them protest that even a distant pipe must ruin their enjoy'...

There has been much activity in the Lords in the last few days since the Lord Chief Justice's amendment on the No Hanging Bill (discussed by R. A. •Cline last week) was carried...

Some say that Proust is even better in Scott' Moncrieff's translation than in the original, and there are others who would claim as much for Robert Lowell's translation of...

THE BOMB IN THE YELLOW BOX

By GROUP-CAPTAIN LEONARD CHESHIRE, VC THERE were two teams out on Tinian, the _ scientists and the aircrew. The scientists, under the administrative control of Brigadier "...

Sin,—Pace Mr. Dibley, see River,. 1896, August 8 'The news has gone forth from one end of Wood Street to the other that the Prince of Wales has purchased a "boater" and will...

SIR,—In at least one part of Yorkshire a straw hat

was called a 'benjie.' I never learned why. Hooton Pagnell Vicarage, Doncaster

Sia,—The wife of your correspondent Mr. C. D. V. Gover (July 30) has, I am afraid, been misinformed in the post office she visited. Anyone may open a Post Office Savings Bank...

SIR,—Quoodle, we know, thinks that man is noseless; but surely

on this occasion it is Quoodle who is shown to be deficient. The reason why so many of the best restaurateurs object to pipe-smokers is that the smell is offensive to other...

SIR,—I am puzzled by the , following statement by Professor Brogan in his review of The New Col' bridge Modern History: 'I might note that in the admirable contribution on...

SIR,—Mr. Colin Legum protests too much. Nobody who knows anything about him would suggest he was a Communist, nor would such a horrid impu- tation be valid in the case of those...

SIR,—I am delighted to learn that when Mr. Quoodle, Mrs. Quoodle and friends dined at 'one of London's best restaurants' the .head waiter refused to allow pipe-smoking; I wish...

A Matter of Judgment

SK—R. A. Cline's statement last week that 'if a Queen's Bench judge imposes a sentence of fourteen or even twenty-four years, no one has any right to curtail the period' is...

The Growth of Private Medical Care

in the Spectator of July 23 with much interest. May I SIR,—I have read Mr. Vaughan's article Mtn out that the Hospital Savin g Association (of idoo) is a member .of the British...

Sirt,---1 did not say that the current production of r tnstrong's Last Goodnight had never been b ettered but, bein g more concerned with the future 1 11, it 1 s , past, 1 said...

SIR, —As a callow youn g forei g n correspondent I was introduced, durin g the Berlin blockade, to the formidable Dorothy Thompson. I said how witty I found her short stories....

SIR,—Someone has to say it. I can't see the Emperor's new clothes. I went to hear Moses and Aaron at the Promenade concert, havin g already heard it on the radio. I mi g ht...

Sia,—In his 'Afterthought' on the subject of death, Mr. Alan Brien--so it seems to me—is merely pla g iarisin g Talleyrand at unwarrantable len g th. That sophisticated, if...

City Beyond the Plain By JOHN TAYLOR M ALL, beautiful, rich girls from Vassar, with I the dew still clinging to their BAs, often select San Fancisco rather than New York City...

MUSIC Frenzy at the Wells

Laughter in the Dark b lack Comedy is essentially a technical D triumph. By the simple device of reversing the stage conventions of light and dark- ness, the mechanics of farce...

A Corps of Ballets p ICKING, one's way through the ballet thickets (on one memorable Sunday recently I calcu- late that more than 20,000 Londoners went to the ballet), what...

The Beast in Buirinel The Diary of a Chambermaid. (Jacey, Marble Arch, 'X' certificate.) A ATER one of Bufinel's films the air is thick with innuendo, nothing is quite what it...

BOOKS It Was Not Sexe

By JOHN 1101.1.()WAY rro my generation, Donne was not a poet I among poets. He was part of the folk-lore, if one may so put it, of the educated. One knew his verse, because it...

Not in the Picture

In Search of Christopher Marlowe: A Pictorial Biography. By A. D. Wraight and Virginia F. Stern. Foreword by Dr. William Urry. (Macdonald, 84s.) IN the past forty years a great...

Baroque Art and Architecture in Central Europe. By Eberhard Hempel. Pelican His- tory of Art. (Penguin Books, 5 gns.) THE High Renaissance, according to Woelfflin, was a narrow...

A Kind of Hero

At school he was revered, yet lonely. No other boy, however much He might dream of it, Dared to try to be his friend. He walked, gaunt and piratical, All bones and grin,...

Dark Side of Affluence

Summer Term's Report By. NICHOLAS DAVENPORT N ow that the debating boys have broken up we can all study the term's report in a quieter atmosphere. I can only deal with eco-...

By LOTHBURY M R. ALEXANDER Ross. chairman of United Dominions Trust, advises shareholders in his report for the year ending June 30, 1965, that owing to the Government's...

By CUSTOS T HE end .of a Parliamentary session left the share markets, as it usually does, in a more hopeful frame of mind. Jabbers are short of stock and a little buying...

Imp and the Impossible

By LESLIE ADRIAN IN an outburst of imitation which the two pioneers, Citroen (since 1932) and BMC (since 1959), must find uncomfortably flatter- ing, their rivals all over the...

Another Part of the Forest By STRIX RAIN drummed on the can- vas. The vast marquee, which two days hence would be in use as the main luncheon tent, was filled with a sort of...

By ALAN BRIEN WHAT antidotes are there to the thought of death? One of the most effective I discovered last week by accident. I wrote down my fears and purged myself. True, I...

SOLUTION TO CROSSWORD No. 1181