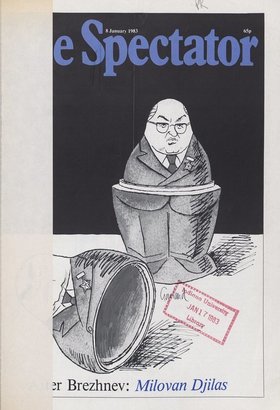 The resilience of nations

The resilience of nations Mr Peter Walker must now feel like Psmith, P. C. Wodehouse's earliest major character, who offered his services in the Morning Globe. 'PSMITH WILL DO...

Political commentary The old Tony Colin Welch It was either Kenneth Horne or Dickie Murdoch - wasn't it? - who, declaring that he was never happier than when lying curled up...

Notebook A s if the Christmas and New Year celebrations were not enough, my birthday seems to come round every year immediately afterwards. I have just become 43, which is a...

Another voice Bubbling with new ideas Auberon Waugh New Years Honours generally cast a blight but under Mrs Thatcher the list has come to resemble more and more the window...

A rude awakening I Robert Haupt Melbourne On Australian beaches this summer the topless women have become bolder, and far more numerous. A Sydney newspaper recently found it...

The mistress of St Moritz

The mistress of St Moritz James Hughes-Onslow F or active feminists, bored of trying to get a drink in El Vino's and looking for more exciting fields to conquer, can I suggest...

Breaking the rules Ian Waller The Mosleys - Oswald ('Tom') and Diana - have intrigued me since I first met them for lunch at the Ritz some years ago. I was struck by the...

The press Outlook gloomy Paul Johnson Both the television and the newspaper industries enter 1983 in a mood of great uncertainty, indeed of some alarm, as too many outlets...

Ordinary womenfolk Sir: I am writing to complain about Paul Johnson's article (1 January) on the women's demonstrations at Greenham Common - not about his characteristic...

Andropov and the Pope

Letters Andropov and the Pope Sir: It was generous of you to recall (Notebook, I January) that it was the Guardian which first broke the news of the alleged KGB connection...

Portentous voice Sir: Richard Ingrams wrote (18 December): 'As for Amery, I was rather amazed to see this toothy old relic of the Macmillan era still being treated by the...

Wise owl Sir: Mr Grimond's 'Does Parliament matter?' (18 December): I simply do not believe that anybody so handsome and eloquent ever gained a nil audience in his constituency...

Graham Greene Sir: In response to the reference in the Notebook (27 November) to my interview with Graham Greene, in which Alexander Chancellor suggests that Mr Greene did not...

Books Faith of our fathers A. N. Wilson Twenty Years at St Hilary Bernard Walke (The Cornish Library/ Anthony Mott Ltd £3.95) Hi ostoievsky believed that it was only...

The Concise Oxford Dictionary of Proverbs Edited by J. A. Simpson

Raining cats and dogs Francis Huxley Living Wonders John Michell and Robert J. M. Rickard (Thames & Hudson £8.95) J was up and down the Great Glen often enough when I was...

The Sphinx Christopher Hawtree The Little Ottleys Ada Leverson (Virago Modern Classics £3.95) I f you come across anything really funny read it to me,' says Colonel Blount to...

Music Child-worship A. S. Henry Everyone loves an infant prodigy, especially at Christmas time. Perhaps a youth with abundant curls sitting at an organ, his hands raised...

Radio Celebration Maureen Owen The BB3C has had much to celebrate during its 60th anniversary; not least, that by the end of 1982, listening to the radio became the mark of...

High life In principle Taki New York New Year's Eve is an edgy time for everyone, but much more so for anyone caught on this side of the Atlantic. As 31 December approaches,...

Low life Knickers Jeffrey Bernard Thank God that's all over. There are far too many holidays in this country and there's far too little work done. Just who are the working...