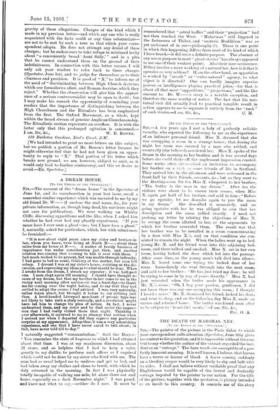 [To TUE EDITOR OF TUE "SPECTArox.1 Sin,—A few years ago

I met a lady of perfectly reliable veracity, who reported the following to me as the experience of an intimate personal friend. Miss X. dreamed that she was occupying a room in a strange house ; that during the night her room was entered by a man who robbed, and eventually (she believed) murdered her. Miss X. spoke of the dream in the morning to her brother, and it was several days before she could shake off the unpleasant impression created. Some weeks after, she n'ecived an invitation to accompany her brother on a visit to some friends of his in Scotland. They arrived late in the afternoon, and were welcomed in the front hall by their friends, servants, &c., but as they went to the drawing-room for tea Miss X. whispered to her brother, "The butler is the man in my dream." After tea the visitors were about to be shown their rooms, when Miss X. again • got hold of her brother, and said to him : "Before we go upstairs, let me describe again to you the room in my dream." She described it accurately, and on going upstairs with her he was obliged to own that her description and the room tallied exactly. I need not prolong my letter by relating the objections of Miss X. to occupy the room allotted to her, or the arguments by which her brother overruled them. The result was that her brother was to be installed in a room communicating by a door with Miss X.'s, and on that condition she con- sented to remain the night. When the ladies went up to bed, young Mr. X. and his friend went into this adjoining bed- room, and there talked and smoked. Miss X. sat in her own room, having locked the door which led into the passage. After some time, as the young men's talk died into silence, Miss X. heard some one trying the locked. door of her room. Immediately she went through into the next room, and said to her brother : "He has just tried my door; he will be trying to come in by way of yours directly." Miss X. bad just retreated when the butler made his appearance in Mr. X.'s room : " Oh; I beg yore• pardon, gentlemen, I did not know there Was any one occupying this room ; I thought I heard a noise." Mr. X. dismissed his friend, locked his door, and went to sleep, and on the following day Miss X. made an excuse and returned home. The butler was found soon after to be subject to "homicide mania.--I am, Sir, &c., Rte. 0. A.