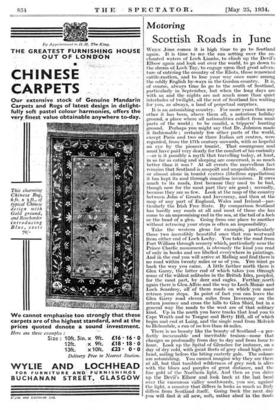 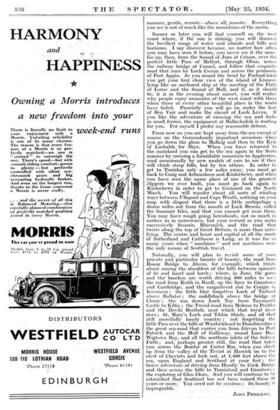 WHEN Ji'me_ comes it is high time to go to - Scotland again. It is time_ to see the sun setting over the en- chanted waters _of Loch Linnhe, to . climb up the Devil's Elbow again and look out Over the world, to go. down to the shot -of,Loch Tay; to engage upon that great adven- , ture of entering the country of the Eliots, those renowned cattle-.rustlers, and to lose your way once more among the oddly English by-ways in the Gordon country. It is, of course, always time to go to the south -of Scotland, particularly in September, but when .the long days are with us and the nights are not much more than quiet interludes of twilight, all the rest of Scotland lies-waiting for you, as always, a land of perpetual surprises. - It is an astonishing-country. For more than any other it has been, above them all, a notorious holiday ground, a place where all' nationalities collect from most parts of the world ; to be candid, a trippers' hunting ground. Perhaps you might say that Dr.-Johnson made it fashionable ; , certainly few other parts of the world, except Paris and two or three Italian art centres, were regarded, from the 17th century onwards, with so hopeful an eye by the pioneer tourist._ That courageous soul must have paid very dearly for the comfort of his curiosity —or is it possibly a myth that travelling today, at least, in so far as eating and sleeping nre concerned, is so much better-than it was ? At all events the marvellous fact remains that-Scotland is unspoilt and unspoilable. , Alone or almost alone in tourist centres (libellous appellation) it has kept its soul through countless invasions. It owes much to its roads, first because they used to be bad, though now for the most part they are good ; secondly, because they are so few. Look at the map of the country between John o' Groats and Inveraray, and then at the map of any part of England, Wales and Ireland—par- ticularly the Irish Free State. By comparison Scotland has hardly any roads at all and most of those she has come to an unpromising end in the sea, at the tail of a loch or the head of a glen. Going from one place to another without retracing your steps is often an impossibility.

Take the western glens for example, particularly those two incredibly beautiful ones that run westward from either end of Loch Lochy. You take the road from Fort William through scenery which, particularly near the Prince Charlie monument, is obvously the kind you read of only in books and see libelled everywhere in paintings. And in the end you will arrive at Mallaig and find_there is no road within twenty miles or so of you. WI -Ititist go back the way you came..- A little farther north _there is Glen Gamy, the latter end' of which takes - you tlfrough some of the wildest solitudes in the British Isles, peopled, for the most part, by deer and eagles. Further_north again there is Glen Affric and the way to LoCh Melia and Loch Scardroy, all _of them roads on which',you must retrace your steps. In point of fact you can leave the Glen Garry road eleven miles from Inveraray on the return journey and cross the hills to Glen Shiel, but in a general way the roads to--the west are of that solitary kind. Up in the north you have tracks that lead you to Cape Wrath and to Tongue and Betty Hill, all of which begin and end at Lairg, and the single road from Melvich to Helmsdale, a run of no less than 40 miles. .

There is no beauty like the beauty of Scotland—a per- fectly inexcusable and inevitable truism—none that changes so profoundly from day to day and from hour to hour.: Look up the Spital,of Glenshee for instance, on a day of dry cold, with great fleets of grey cloud high over- head, sailing before the biting easterly gale. The colours are astonishing.' You cannot imagine why they are there at all, but that tumbled wilderness of grey rock is alive with the blues and purples of great distance, and the fine gold of the Northern, light. And then as you drive up the Devil's Elbow and look back at the, last bend over the enormous- valley southwards, you see, against the light, a country that differs in looks as much as Italy differs from Scotland-:itself.; Going back -the next day -you will: find- it all new, soft, rather aloof in the Scots manner, gentle, remote—above all, jemote. Everything you see is out of reach like the mountains of the moon.

Sooner or later you will find yourself on the west coast where,:- if the sun is shining, you will discover the loveliest range of water and islands and hills and horizons. i say discover because, no matter •how often you may have seen it before, you never see it the same. Go up, then, from the.Sound of Jura at Crinan, over the perfect little Pass of Melfort, through Oban, across the railway bridge at Connel, and follow that -exquisite road that runs by Loch Creran and across the peninsula of Port Appin. As you round the bend by PortnaCroish you get your first clear view of the island of Lismore lying like an anchored- ship at the meeting of the Firth of Lorne and the Sound of Mull, and if, as it should be, it is in the evening about sunset, you will realize why people carry memories of the west coast with them when those of every other beautiful place in the world have faded: Presently you will go on under the foot of Ben Vair and make the circuit of Loch Leven. If you like the adventure of crossing the sea and lochs in small ferries, the equipment at Ballachulish is waiting for you For myself I prefer any reasonable detour.

From now on you are kept away from the sea except of course on the tremendously important occasions when you go down the glens to Mallaig and then to the Kyle of Lochalsh for Skye. When you have returned to the mainland you can get to the sea again in the Scots manner by crossing.a formidable mountain to Applecross, used occasionally by new models of cars to see if they will climb steep hills, but by few others. In order to get to Torridon only a few miles away, you must , go back to Craig and Achnasheen and Kinlochewe, and when you have seen the name place of one of the greatest clippers we ever built, you must go back again to Kinlochewe in order to get to Gruinard on the North Minch. You will wander about all sorts of winding ways between Ullapool and Cape Wrath, noticing on your map with disgust that there is a little archipelago a dozen miles out from the mouth of Loch Broom, -called the Summer Isles, and that you cannot get near them. You•may have rough going hereabouts, not so much ia surface as in narrowness, but your reward as you make successively Scourie, Rhiconich, and the road that twists along the top of Great Britain, is more than satis- fying. The centre and heart and capital of all the roads of Sutherland and Caithness is Lang, as it was for so many years when " machines " and not machines were the only means of Scottish travel.

Naturally, you will plan to revisit some of • your private and particular haunts of beauty,. the road from Bonar Bridge to Alness, for example, which • twists about among the shoulders of the hills between spinnies of fir and hazel and larch ; where, in June, the gorse and the bracken are worth driving 300 miles to 'see ; the road from Keith in Banff, up the Spey to Grantown and Carrbridge, and the magnificent run to Craigie in InvernesS ; the little blue forgotten Loch of Tarland above Ballater ; the saddleback above the bridge at Clunie ; the run down Loch Tay from Taymouth Castle to Killin ; the Tweed road from Melrose to Peebles and the Devils •Beeftub, near which that royal river rises ; St. Mary's Loch and Tibbie Shiels, and all that still mercifully lonely country - • not forgetting - the little Pass over the hills at Wanlockhead in Dumfriesshire ; the great sea-road that carries you from Girvan to Port Patrick and the Mull of Galloway, round Luce Bay, Wigtown Bay, and all the northern inlets of the Solway Firth ; and, perhaps greater still, the road that takes you across the Border at Carter Bar, when you climb up from the valley of the Teviot at Hawick on to the crest of CheviotS and look out, at 1,400 feet above the *sea, upon England and Scotland at your feet ; the brave adventure of driving from Huntly to Cock Bridge and then' across the hills-- to Tomintoul and Grantowu ; the exploring of Glen Mora. And you will continue to be astonished that Scotland has not been ruined these 30 years. or niore: Yoti need not be anions ; its beauty is impregnable..