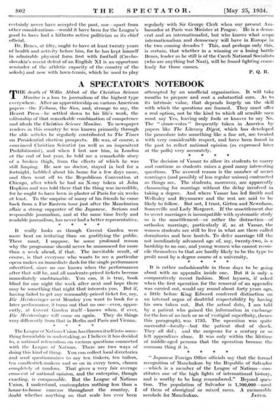 has thrown itself into some- thing formidable in undertaking, as I believe it has decided to, a national referendum on various questions connected with the League of Nations. There are two ways of doing this kind of thing. You can collect local directories and send questionnaires to say ten tinkers, ten tailors, ten candlestick-makers and so. on in every town, chosen completely at random. That gives a very fair average cross-cut of national opinion, and the enterprise, though exacting, is compassable. But the League of. Nations Union, I understand, contemplates nothing less than a house-to-house canvass throughout the country. I doubt whether anything on that scale has ever been attempted by an unofficial organization. It will take . months to prepare and cost a substantial sum. As to its intrinsic value, that depends largely on the skill with which the questions are framed. They must offer a real option, not be the kind to which all sensible men must say Yes, leaving only fools or knaves to say No. The " straw-votes " frequently taken in America by papers like The Literary Digest, which has developed the procedure into something like a fine art, are treated with very considerable respect, and have been found in the past to reflect national opinion (as expressed later at the polls) very accurately. * * *