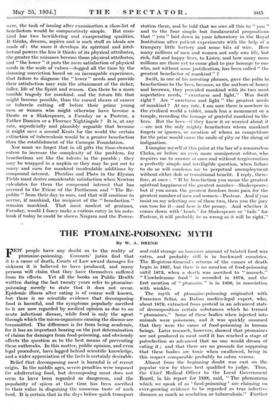 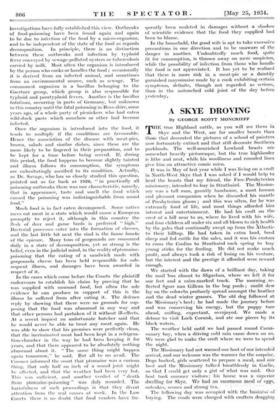 FEW people have any doubt as to the reality of ptomaine-poisoning. Coroners' juries find that it is a cause of death, Courts of Law award damages for sickness it is believed to have produced, and many persons will claim that they have themselves suffered from its effects. Yet all the books on Public Health written during the last twenty years refer to ptomaine- poisoning merely to state that it does not occur. Epidemic illness after eating is of course well known, but there is no scientific evidence that decomposing food is harmful, and the symptoms popularly ascribed to it are now regarded by medical opinion as due to an acute infectioui disease; while food is only the agent through which the micro-organisms causing the disease are transmitted. The difference is far from being academic, for it has an important bearing on the just determination of claims for damages from food-poisoning, and obviously affects the question as to the best means of preventing these outbreaks. In this matter, public opinion, and even legal procedure, have lagged behind scientific knowledge, and a wider appreciation of the facts is certainly desirable.

Belief that decomposing meat is harmful is of recent origin. In the middle ages, severe penalties were imposed for adulterating food, but decomposing meat does not seem to have been regarded as dangerous, and the popularity of spices at that time has been ascribed to their value in disguising the nauseous taste of such food. It is certain that in the days before quick transport and cold storage an immense amount of tainted food was eaten, and probably still is in backward countries. The Registrar-General's returns of the causes of death begin in 1837, but there is no mention of food-poisoning until 1873, when a death was ascribed to " mussels." " Unwholesome food " is recorded in 1878, and the first mention of " ptomaine " is in 1890, in association with winkles.

The myth of ptomaine-poisoning originated with Francisco Selini, an Italian medico-legal expert, who, about 1870, extracted from proteid in an advanced state of decomposition certain substances which he termed " ptomaines." Some of these bodies when injected into animals were poisonous, and it was quickly assumed that they were the cause of food-poisoning in human beings. Later research, however, showed that ptomaines are not produced in meat until it has reached a stage of putrefaction so advanced that no one would dream of eating it ; and that there arc no grounds for supposing that these bodies are toxic when swallowed, being in this respect comparable probably to cobra venom.

Almost from the beginning doubt was cast on the popular view by those best qualified to judge. Thus, the Chief Medical Officer to the Local Government Board, in his report for 1888, said, " The phenomena which we speak of as ' food-poisoning' are claiming on ever-growing evidence to be regarded as true infective diseases as much as scarlatina or tuberculosis." Further investigations have fully established this view. Outbreaks of food-poisoning have been found again and again to be due to infection of the food by a micro-organism, and to be independent of the state of the food as regards decomposition. In principle, there is no distinction between these outbreaks and infection by typhoid fever conveyed by sewage-polluted oysters or tuberculosis carried by milk. Most often the organism is introduced by the person who cooks or handles the food ; occasionally it is derived from an infected animal, and sometimes from an environmental source, such as sewage. The commonest organism is a bacillus belonging to the Gaertner group, which group is also responsible for typhoid and paratyphoid fevers. Another is the bacillus botulinus, occurring in parts of Germany, but unknown in this country until the fatal poisoning in Ross-shire, some years ago, of a whole party of picnickers who had eaten wild-duck paste which somehow or other had become infected.

Once the organism is introduced into the food, it tends to multiply if the conditions are favourable. Hence the association of the disease with meat-pies, brawn, salads and similar dishes, since these are the more likely to be fingered in their preparation, and to be kept for a time before being served. If, during this period, the food happens to become slightly tainted and illness follows its consumption, the symptoms are unhesitatingly ascribed to its condition. Actually, as Dr. Savage, who has so closely- studied this question, pointed out as far back as 1920, " in practically all poisoning outbreaks there was one characteristic, namely, that in appearance, taste and smell the food which caused the poisoning was indistinguishable from sound food." - Much food is in fact eaten decomposed. . Some native races eat meat in a state which would cause a European promptly to reject it, although in this country the flesh of deer and game birds is preferred " high." Bacterial processes enter into the formation of cheeses, and the last little bit next the rind is the bonne bouche of the epicure. Many tons of gorgonzola arc consumed daily in a state of decomposition, yet so strong is the belief, even in the judicial mind, in the reality of ptomaine- poisoning that the eating of a sandwich made with gorgonzola cheese has been held responsible for sub- sequent illness, and damages have been awarded in respect of it.

In the cases which come before the Courts the plaintiff endeavours to establish his claim by proving that he was supplied with unsound food, but often the sole evidence he can produce in support of this is the illness he suffered from after eating it. The defence reply by showing that there. were no grounds for sup- posing that the food was abnormal in any way and that other persons had partaken of it without ill-effects.

At a recent inquest an unfortunate butcher said that he would never be able to trust any meat again. He was able to show that his premises were perfectly clean, that the incriminated meat had been kept in a refrigera- tion-chamber in the way he had been keeping it for years, and that there appeared to be absolutely nothing abnormal about it. " The same thing might happen again tomorrow," he said. BO all to no avail. The Coroner informed the court that ptomaine was a curious thing, that only half an inch of sound joint might be affected, and that the weather had been very hot. This was sufficient, and another Verdict of " death front ptomaine-poisoning " Was duly recorded. The harmfulness of such proceedings is that they divert attention from the real causes at work. • In the Law Courts there is no doubt that food vendors have frc- quently been mulcted in damages without a shadow of scientific evidence . that the food they supplied had been to blame.

In the household, the good wife is apt to take excessive precautions in one direction and to be unaware of the danger in another. Undoubtedly much food, . quite fit for consumption, is thrown away on mere suspicion, while the possibility of infection from those who handle the food is not appreciated. It has yet to be realized that there is more risk in a meat-pie or a daintily garnished mayonnaise made by a cook exhibiting certain symptoms, definite, though not regarded as serious, than in the untouched cold joint of the day before yesterday.