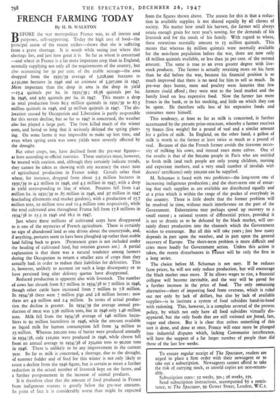 BEFORE the war metropolitan France was, to all intents and purposes, self-supporting. Today the high cost of food—the principal cause of the recent strikes—shows that she is suffering from a grave shortage. It is worth while seeing just where this shortage lies, and just how great it is. So far as wheat is concerned —and wheat in France is a far more important crop than in England, normally supplying not only all the requirements of the country, but also accounting for 30 per cent, of the arable acreage—the area dropped from the 1930/39 average of 5,228,000 hectares to 4,131,000 hectares in 1946 and an estimate of 3,307,000 in 1947- More important than the, drop in area is the drop in yield —i5.4 quintals per ha. in 1930/39; 16.36 quintals per ha. in 1946, and 9.65 quintals per ha. in 1947. This means a drop in total production from 80.5 million quintals in 1930/39 to 67.5 million quintals in 1946, and 32 million quintals in 1947. The dis- location caused by Occupation and Liberation is partly responsible for this severe decline, but so far as 1947 is concerned, the weather also has played a large part. The frost killed much of the winter corn, and lasted so long that it seriously delayed the spring plant- ing. On some farms it was impossible to make up lost time, and even when spring corn was sown yields were severely affected by the drought.

But other crops, too, have declined from the pre-war figures— at least according to official statistics. These statistics must, however, be treated with caution, and, although they certainly indicate trends, they cannot be taken as showing with any accuracy the exact state of agricultural production in France today. Cereals other than wheat, for instance, dropped from about 5.5 million hectares in 1930/39 to 4.2 million in 1946, and 4.3 million in 1947, with a drop in yield corresponding to that of wheat. Potatoes fell from 1.41 million ha. in 1930/39 to .85 million in 1946, and .97 million in 1947 (excluding allotments and market gardens), with a production of 15.7 million tons, to million tons and 11.4 million tons respectively, while the total cultivated area throughout France fell from 17.8 millions in 1934/38 to 15.3 in 1946 and 16.2 in 1947.

Just where these millions of cultivated acres have disappeared to is one of the mysteries of French agriculture. There is certainly no sign of abandoned land as one drives about the countryside, and, if anything, pastures seem to have been ploughed up rather than arable land falling back to grass. (Permanent grass is not included under the heading of cultivated land, but rotation grasses are.) A partial explanation is that there was a natural tendency among farmers during the Occupation to return a smaller area of crops than they actually had, in order to reduce their liabilities for deliveries. This is, however, unlikely to account tor such a large discrepancy or to have persisted long after delivery quotas have disappeared.

Reduced production is apparent also with livestock. The number of cows has shrunk from 8.7 million in 1934/38 to 7 million in 1946, though other cattle have increased from 7 million to 7.8 million. In 1934/38 there were 7 million pigs and 2.8 million horses: now there are 49 million and 2.4 million. In terms of actual produc- tion the decline is greater. In 1934/39 the average annual pro- duction of meat was 3.36 million tons,-but in 1946 only 1.46 million tons. Milk fell from the 1934/38 average of 146 million hecto- litres to 92 million hectolitres in 1946, while the amount available as liquid milk for human consumption fell from 34 million to 25 million. Whereas 200,000 tons of butter were produced annually in 1934/38, only rio,000 were produced in 1946, while cheese fell from an annual average in 1934/38 of 250,000 tons to 90,000 tons in 1946. There is unlikely to be any improvement in the current year. So far as milk is concerned, a shortage, due to the drought, of summer fodder and of feed for this winter is not only likely to cause a decline from the 1946 figure, but is certain to mean a further reduction in the actual number of livestock kept on the farms, and a further postponement in the increase of animal products.

It is therefore clear that the amount of food produced in France from indigenous sources is greatly below the pre-war amounts. In point of fact it is considerably worse than might be expected from the figures shown above. The reason for this is that a reduc- tion in available supplies is not shared equally by all classes of society. No matter how small his harvest, the farmer will always retain enough grain for next year's sowing, for the demands of his livestock and for the needs of his family. With regard to wheat, these retentions normally amount to 15 million quintals. This means that whereas 65 million quintals were normally available for the non-farm population before the war, there are now only 18 million quintals available, or less than 30 per cent, of the normal amount. The same is true to an even greater degree with live- stock products. The farmer is actually retaining more on his farm than he did before the war, because his financial position is so much improved that there is no need for him to sell so much. In pre-war days butter, meat and poultry were luxuries that few farmers Could afford ; they were sent to the local market and the family lived on less expensive food. Now the farmer has more francs in the bank, or in his stocking, and little on which they can be spent. He therefore sells less of his expensive foods and consumes more himself.

This tendency, at least as far as milk is concerned, is further accentuated by the present price-structure, whereby a farmer receives 75 francs (live weight) for a pound of veal and a similar amount for a gallon of milk. In England, on the other hand, a gallon of milk is worth to the farmer at least twice as much as a pound of veal. Because of this the French farmer avoids the tiresome neces- sity of milking his cows, and instead rears more calves. One of the results is that of the 80o,000 people in Paris who are entitled to fresh milk (and such people are only young children, nursing and expectant mothers, and a very small number of invalids with doctors' certificates) only soo,000 can be supplied.

M. Schuman is faced with two problems—the long-term one of increasing indigenous production ; and the short-term one of ensur- ing that such supplies as are available are distributed equally and at a price which is within the range of the pocket of everybody in the country. There is little doubt that the former problem will be resolved in time, without much interference on the part of the Government. Exhortations may perhaps speed up recovery to a small extent ; a rational system of differential prices, provided it is not so drastic as to be defeated by the black market, will cer- tainly direct production into the channels which the Government wishes to encourage. But all this will take years ; just how many depends in part upon the weather, and in part upon the general recovery of Europe. The short-term problem is more difficult and cries more loudly for Government action. Unless this action is taken, the recent disturbances in Fiance will be only the first in a long series.

The choice before M. Schuman is not easy. If he reduces farm prices, he will not only reduce production, but will encourage the black market once more. If he allows wages to rise, a financial collapse will become inevitable, and the way will be paved for a further increase in the price of food. The only remaining alternative—short of importing food from overseas, which is ruled out not only by lack of dollars, but also by lack of available supplies—is to institute a system of food subsidies hand-in-hand

with rationing. This, however, is a complete reversal of the present policy, by which not only have all food subsidies virtually dis- appeared, but the only foods that are still rationed arekbread, fats, sugar and cheese. But it is clear that unless something of this sort is done, and done at once, France will once more be plunged into industrial disputes which, lacking Communist interference, will have the support of a far larger number of people than did those of the last few weeks.