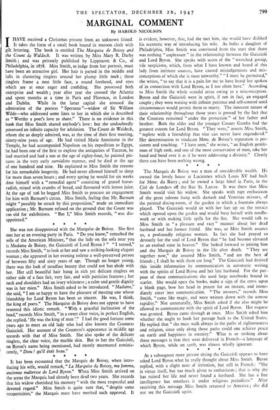 IHAVE received a Christmas present from an unknown friend. It takes the form of a small book bound in maroon cloth with gilt lettering. The book is entitled The Marquise de Boissy and the Count de Waldeck. It was written by Miss Mary R. Darby Smith ; and was privately published by Lippincott & Co., of Philadelphia, in 1878. Miss Smith, to judge from her portrait, must have been an attractive girl. Her hair is parted in the middle and falls in clustering ringlets around her plump little neck ; these ringlets frame a neat little face, a round forehead, and eyes which are at once eager and confiding. She possessed both enterprise and wealth ; year after year she crossed the Atlantic and spent months at a time in Paris and Florence, in London and Dublin. While in the latter capital she aroused the admiration of the poetess "Speranza "—widow of Sir William Wilde—who addressed some lines to her in which she is described as "Worthy a poet's love to share." There is no evidence in this book that Miss Smith shared anybody's love: but she undoubtedly possessed an infinite capacity for adulation. The Count de Waldeck, whom she so deeply admired, was, at the time of their first meeting, ninety-nine years of age. He had visited Marie Antoinette in the Temple, he had accompanied Napoleon on his expedition to Egypt, he had been one of the first to explore the antiquities of Yucatan, he had married and had a son at the age of eighty-four, he painted pic- tures in the very early surrialiste manner, and he died at the age of one hundred and nine. He explained to Miss Smith the reasons for his remarkable longevity. He had never allowed himself to sleep for more than seven hours ; and every spring he would for six weeks dose himself with a "remedial agent" consisting of grated horse- radish, mixed with crumbs of bread, and flavoured with lemon juice. At the age of ro6 he begged Miss Smith to procure an engagement for him with Barnum's circus. Miss Smith, feeling that Mr. Barnum might "possibly be struck by this proposition," made an immediate application ; Mr. Barnum refused on the ground that the Count was too old for exhibitions. "But I," Miss Smith records, "was dis- appointed."

She was not disappointed with the Marquise de Boissy. She first met her at an evening party in Paris. "Do you know," remarked the wife of the American Minister, "that the lady on the sofa near you is Madame de Boissy, the Guiccioli of Lord Byron ? " "I turned," records Miss Smith, "to look at her and saw a striking-looking elegant woman ; she appeared in her evening toilette a well-preserved person of between fifty and sixty years of age. Though no longer young, there was the look of steadfast beauty that could not but abide with her. Her still beautiful hair hung in rich yet delicate ringlets on either side of a face fair, very fair, and with•patrician features ; her neck and shoulders had an ivory whiteness ; a calm and gentle dignity was in her mien." Miss Smith asked to be introduced. "Madame," she said, "I am so happy to have the pleasure of meeting one whose friendship for Lord Byron has been so sincere. He was, I think, the king of poets." The Marquise de Boissy does not appear to have resented this idiotic remark. "With a graceful inclination of the head," records Miss Smith, "in a sweet clear voice, in perfect English, she replied, 'He was the king of men '." I had the good fortune some years ago to meet an old lady who had also known the Countess Guiccioli. Her account of the Countess's appearance in middle age accords with that of Miss Smith. She also spoke of the delicate ringlets, the clear voice, the marble skin. But to her the Guiccioli, on Byron's name being mentioned, had merely murmured reminis- cently, "Dieu ! qu'il itait beau."

* * * * It has been recounted that the Marquis de Boissy, when intro- ducing his wife, would remark, "La Marquise de Boissy, ma femme, ancienne maitresse de Lord Byron." When Miss Smith arrived on the scene the Marquis had already been dead two years. She records that his widow cherished his memory "with the most respectful and devoted regard." Miss Smith is quite sure that, "despite some eccentricities," the Marquis must have merited such approval. It

is evident, however, that, had she met him, she would have disliked his eccentric way of introducing his wife. As befits a daughter of Philadelphia, Miss Smith was convinced from the start that there was nothing " unpleasant " in the relationship between the Guiccioli and Lord Byron. She speaks with scorn of the "wretched gossip, vile suspicions, which, from what I have known and heard of this lady from intimate sources, have caused misjudgements and mis- conceptions of which she is most unworthy." "I must be permitted," she writes, "to Say that it is a pain for me to have heard her spoken of in connection with Lord Byron, as I too often have." According to Miss Smith the whole scandal arose owing to a misconception. Byron and the Guiccioli were in spirit, if not in fact, an engaged couple ; they were waiting with infinite patience and self-control until circumstances would permit them to marry. The innocent nature of their relationship throughout those years is proved by the fact that the Countess remained "under the protection "- of her father and brother. Both the older and the younger Counts Gamba had the greatest esteem for Lord Byron. "They were," asserts Miss Smith, "replete with a friendship that vice can never have engendered." Her determination to vindicate Mme. de Boissy's reputation is per- sistent and touching. " I have seen," she writes, "an English gentle- man of high rank, and one of the most conservative of men, take her hand and bend over it as if he were addressing a divinity." Clearly there can have been nothing wrong.

The Marquis de Boissy was a man of considerable wealth. He owned the lovely house at Luciennes which Louis XV had built for Mme. du Barry ; and he owned a large hotel in Paris, in the Cite de Londres off the Rue St. Lame. It was there that Miss Smith would visit his widow. She speaks with rapt enthusiasm of the great saloons hung with damask and Venetian mirrors, of the painted dining-room, of the garden in which a fountain always played. The Guiccialt would sit with her feet up on the terrace which opened upon the garden and would busy herself with needle- work or with making little spills for the fire. She would talk to Miss Smith in "a pleasant and racy" manner about her dead husband and her former friend. She was, so Miss Smith assures us, a profoundly religious woman. In fact she had prayed so devoutly for the soul of Lord Byron that "he had become elevated to an exalted state in heaven." She looked forward to joining him and the Marquis de Boissy in the life after death. "They are together now," she assured Miss Smith, "and are the best of friends ; I shall be with them ere long." The Guiccioli had derived this inside information by communication in automatic writing with the spirits of Lord Byron and her late husband. For the pur- pose of these communications she used large notebooks bound in scarlet. She would open the books, make a sign of the cross upon a blank page, bow her head in prayer for an instant, and imme- diately enter into communication. "The answers," records Miss Smith, "came like magic, and were written down with the utmost rapidity." Not unnaturally, Miss Smith asked if she also might be allowed to communicate with the spirit of Lord Byron. Her request was granted. Byron came through at once. Miss Smith asked him whether she ought to book her passage back to the United States. He replied that "she must walk always in the paths of righteousness and religion, since only along those paths could one achieve peace on earth and happiness in eternity." What is so striking about these messages is that they were delivered in French—a language of which Byron, while on earth, was almost wholly ignorant.

At a subsequent more private sitting the Guiccioli appears to have asked Lord Byron what he really thought about Miss Smith. Byron replied, with a slight note of irritation, but still in French : "She is virtue itself, but too much given to enthusiasm ; that is why she has ruined her life and never found a husband. She has a fine intelligence but smothers it under religious prejudices." After receiving this message Miss Smith returned to America ; she did not see the Guiccioli again.