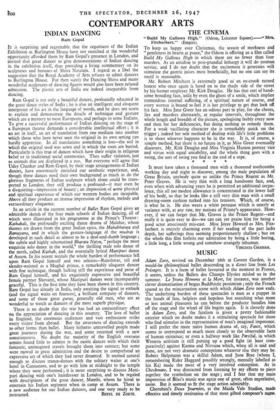 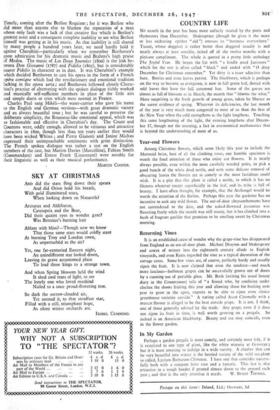 Adam Zero, revived on December t6th at Covent Garden, is

a would-be philosophical ballet descending in a direct line from Les Presages. It is a form of ballet favoured at the moment in France, it seems, unless the Ballets des Champs Ely-sees misled us in the summer. Le Pune Homme et la Mort, for instance was another clever dramatisation of bogus Buddhistic pessimism only the French spared us the reincarnation scene with which Aden; Zero now ends. The underlying burden of these spectacles is man as a puppet in the hands of fate, helpless and hopeless but snatching what more or less animal pleasures he can before the producer bundles him off the stage and the wheel of life begins again. It is cleverly done in Adam Zero, and the fatalism is given a pretty fashionable exterior which no doubt makes it a stimulating spectacle for those who find stimulus in the representation of man's imagined impotence. I still prefer the more naive human drama of, say, Faust, which seems to correspond so much more closely to the observable facts of human existence; or even a halfway work like Parsifal, in which Western activism is still putting up a good fight (at least com- paratively) against Karma and Nirvana which,, when all is said and done are not very dramatic conceptions whatever else they may be. Robert Helpmann was a skilful Adam, and June Brae (whom I, remembering Rider Haggard possibly wrongly, mentally labelled as his I(a) made the most of a very involved conception. As in Checkmate, I was distracted from listening by my efforts to piece together the symbolism on the stage ; and I fear that my main impression of Bliss's music was again one of great, often superlative, noise. But it seemed to fit the stage action admirably.

Cherulaini's Deux Purnies, at the Maida Vale Studios, made effective and timely restitution of that most gifted composer's nape.

Timely, coming after the Berlioz Requiem ; for it was Berlioz who did more than anyone else to blacken the reputation of a man whose only fault was a lack of that creative fire which is Berlioz's greatest asset and a consequent complete inability to see what Berlioz himself was getting at in his music. As that inability is still shared by many people a hundred years later, we need hardly hold it against Cherubini—particularly when we remember Beethoven's great admiration for his dramatic music and Brahms's high praise of Medea. The music of Les Deux 7ournies (1800) is the link be- tween Don Giovanni (1787) and Fidelio (18o5), but is considerably nearer Fidelio in character as in date. It was Cherubini's example which decided Beethoven to cast his opera in the form of a French opira comique which had the revolutionary and emotional tradition lacking in the opera seria; and Beethoven followed closely Cheru- bini's practice of alternating with the spoken dialogue richly worked and musically self-sufficient numbers in place of the little airs and simple duets or trios which were normal in France.

Charles Paul sang Mikeli—the water-carrier who gave his name to the English and German versions—with great dramatic variety and an always beautiful tone ; but he was careful to preserve the deliberate simplicity, the Rousseau-like emotional appeal, which was so fashionable and effective in C.herubini's day. The Count and Countess were, oddly enough, allowed to be virtuous and attractive characters in 1800, though less than ten years earlier they would have been wicked Whites ; and Pierre Gianotti and Janine Michau expressed their unimpeachable sentiments with great distinction. The French spoken dialogue was rather a test on the English members of the cast, but Marion Davies (Marcellina), Fabian Smith (Commandant) and Ernest Frank (Lieutenant) were notable for their linguistic as well as their musical performance.