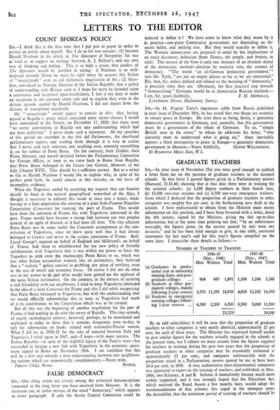 FALSE DEMOCRACY SIR, —One thing stands out clearly among the reiterated

misconceptions contained in the long letter you have received from Moscow. It is the recurrent use, or rather misuse, of the word "democracy," which appears in every paragraph. If only the Soviet Central Committee could be

induced to define it We have come to know what they mean by it in practice--one-Dartyr C,ommunist government not depending on the secret ballot, and nothing else. But they would scarcely so define it. The Western democracies are prepared to stand by the implications of an exact dictionary definition (from Demos, the people, and Itratein, to rule). The misuse of the Veto is only one instance of an absolute denial of the democratic method—decision by majority vote, the essence of democracy. "The words 'an all-German democratic government,'" says Mr. Tarle, "are not an empty phrase so far as we are concerned." But, that, Sir, unless defined and related to the meaning of "democratic," is precisely what they are. Obviously, the first practical step towards " democratising " Germany would be to democratise Russian methods.— I am, Sir, yours faithfully, F. D. MERRALLS. Lynchmere Green, Haslemere, Surrey.