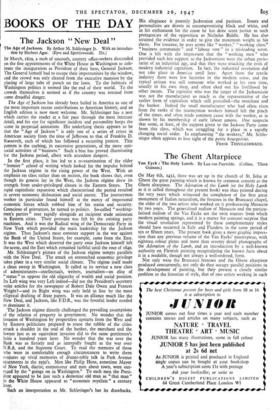 The Age of Jackson. By Arthur M. Schlesinger Jr. With an introduc- tion by Herbert Agar. (Eyre and Spottiswoode. 21s.) IN March, 1829, a mob of uncouth, country office-seekers descended on the fine appointments of the White House in Washington to cele- brate the inauguration as President of their hero, General Jackson. The General hiniself had to escape their importunities by the window, and the crowd was only cleared from the executive mansion by the placing of large tubs of punch on the lawn. To the habitués of Washington politics it seemed like the end of their world. To the crowds themselves it seemed as if the country was rescued from some dreadful danger.

The Age of 7ackson has already been hailed in America as one of the most important recent contributions to American history, and an English edition is now most welcome. Mr. Schlesinger has a zest which carries the reader at a fair pace through the most intricate detail, and his eye for significant incident and personality keeps the scene in perpetual animation. His underlying thesis appears to be that the "Age of Jackson" is only one of a series of crises in American society from the time of Jefferson to that of Franklin D. Roosevelt, each of which has followed a recurring pattern. This pattern is the curbing, in successive generations, of the more anti- social activities of "business." Such a bias has proved illuminating for the Jackson period, albeit with attendant dangers.

In the first place, it has led to a re-examination of the older " frontier " school of writing which looked for the impulse behind the Jackson regime in the rising power of the West. With an emphasis on class rather than on section, the book shows that, even though its genesis lay in the West, the Jackson regime drew its strength from under-privileged classes in the Eastern States. The rapid capitalistic expansion which characterised the period resulted in severe economic dislocation and social unrest. The journeyman worker in particular found himself at the mercy of impersonal. economic forces which robbed him of his status and security. Conscious of grievances, he turned to politics. So-called "working- men's parties" rose rapidly alongside an incipient trade unionism in Eastern cities. Their pressure was felt by the existing party machines. And it was the Radical wing of the Democratic Party in New York which provided the main leadership for the Jackson regime. Thus Jackson's most constant support in the war against the Bank of the United States, for example, came from the East. It was the West which deserted the party once Jackson himself left the scene and the East which remained faithful until the rout of 1840.

Mr. SChlesinger's picture of the Jackson regime tempts parallels with the New Deal. The attack on entrenched economic privilege takes plate in a very similar social climate. The regime itself made a clean sweep in Washington. It called to its service a new class of administrators—intellectuals, writers, journalists—an elite of " status " to oppose the old oligarchy of wealth and social position. Its Left wing was very Left indeed—did not the President's secretary write articles for the newspaper of Robert Dale Owen and Frances Wright?—and its Right wing was only held in line by the most elliptical drafting of State papers. It was an alliance much like the New Deal, and Jackson, like F.D.R., was the forceful leader needed to dominate it.

The Jackson regime directly challenged the prevailing assumptions of the relation of property to government. No wonder that the invasion of Washington by propertiless upstarts from the West and by Eastern politicians prepared to rouse the rabble of the cities struck a shudder in the soul of the banker, the merchant and the lawyer just as an equivalent invasion did to the same gentlemen's heirs a hundred years later. No wonder that the war over the Bank was as fiercely and as intrepidly fought as the war over N.R.A. and the Supreme Court. To read the memoirs of those who were in comfortable enough circumstances to write them conjures up vivid memories of dinner-table talk in Park Avenue apartments in the 1930's. Men like Philip Hone, sometime Mayor of New York, diarist, connoisseur and man about town, were out- raged by the "goings on in Washington." To such men the Presi- dent appeared to be just such a demoniac old man as "that man" in the White House appeared to "economic royalists" a century later, Such an interpretation as Mr. Schlesinger's has its drawbacks.

His allegiance is patently Jacksonian and partisan. Issues and personalities are drawn in uncompromising black and white, and in his enthusiasm for the cause he has done scant justice to such protagonists of the opposition as Nicholas Biddle. He has also strained the evidence in order to give the maximum weight to his thesis. For instance, he uses terms like "worker," "working class," "business community" and "labour vote" in a misleading sense. One is left with the impression that the "working men" who provided such key support to the Jacksonians were the urban prole- tariat of an industrial age, and that they were attacking the evils of modern industrial capitalism. In fact, the industrial revolution did not take place in America until later. Apart from the textile industry there were few factories in the modern sense, and the typical artisan was still someone who worked in his own time, usually in his own shop, and often eked out his livelihood by other means. The capitalist who was the target of the Jacksonians was not the manufacturer so much as the representative of the earlier form of capitalism which still prevailed—the merchant and the banker. Indeed the small manufacturer who had often risen from the ranks of the journeyman workers himself felt the pinch of the times, and often made common cause with the worker, as is shown by his membership of early labour unions. One suspects that some, at least, of the support given to the Jackson Party came from this class, which was struggling for a place in a rapidly changing social order. In emphasising "the workers," Mr. Schle- singer often appears to lose sight of the petite bourgeoisie.