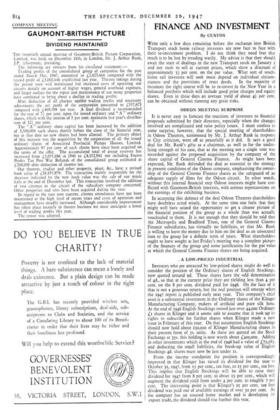 Wax only a few days remaining before the exchange into British Transport stock home railway investors are now face to face with their re-investment problem. I do not think they need fear that much is to be lost by treading warily. My advice is that they should await the start of dealings in the new Transport stock on January 2 and not rush to sell at current prices, which show a discount of approximately 3+ per cent, on the par value. What sort of stocks home rail investors will seek must depend on individual circum-

stances and the provisions of trust deeds. In the majority of instances the right course will be to re-invest in the New Year in a balanced portfolio which will include good prior charges and equity shares. Even in these days an average yield of about 4+ per cent. can be obtained without running any great risks.

It is never easy to forecast the reactions of investors to financial proposals submitted by their directors, especially when the changes involved are complicated and raise policy issues. I must confess to some surprise, however, that the special meeting of shareholders in Odeon Theatres, summoned by Mr. J. Arthur Rank in response to City criticism, went off as peacefully as it did. It says a good deal for Mr. Rank's gifts as a chairman, as well as for the under- lying strength of his case, that at the meeting not a single vote was recorded against the proposed acquisition by the company of the share capital of General Cinema Finance. As might have been expected, Mr. Rank defended the deal as essential to the strategy in present conditions of the Odeon company, emphasising the owner- ship of the General Cinema Finance shares as the safeguard of an adequate supply of films for the Odeon circuit. In other words, without this internal financial step Odeon interests might have con- flicted with Gaumont-British interests, with serious repercussions on the earnings of the exhibiting business.

In accepting this defence of the deal Odeon Theatres shareholders have doubtless acted wisely. At the same time one feels that they might well have seized the opportunity to get a clearer picture of the financial position of the group as a whole than was actually vouchsafed to them. It is not enough that they should be told that the Metropolis and Bradford Trust, one of the General Cinema Finance subsidiaries, has virtually no liabilities, or that Mr. Rank is willing to leave the money due to him on the deal as an unsecured loan to the group for a definite term of years. What shareholders ought to have sought at last Friday's meeting was a complete picture of the finances of the group and some justification for the par value at which the General Cinema Finance shares are being acquired.

Investors who are attracted by low-priced shares might do well to consider the position of the Ordinary shares of English Stockings, now quoted around 9d. These shares have the odd denomination of 4d., so that at the current price they are yielding less than 4 per cent, on the 8 per cent. dividend paid for 1946. On the face of it that is not a generous return, but the real position will emerge when the 1947 report is published early next year. This company's chief asset is a substantial investment in the Ordinary shares of the Klinger Manufacturing -Company, makers of artificial and pure silk hose. At the end of 1946 English Stockings owned just over 44,000 Ordinary Li shares in Klinger and it seems safe to assume that it took up its rights to subscribe for further shares when Klinger made a new issue in February of this year. On that assumption English Stockings should now hold about 230,000 of Klinger Manufacturing shares in their present form of 5s. units. As these are quoted on the Stock Exchange at 35s. this holding is now worth about L400,000. Adding in other investments which at the end of 1946 had a value of £75,583, and deducting the small liabilities, the break-up value of English Stockings 4d. shares must now be just under Is.

From the income standpoint the position is correspondingly improved in that Klinger has raised its dividend for the year to October 31, 1947, from 15 per cent., tax free, to 25 per cent., tax free. This implies that English Stockings will be able to raise their dividend for 1947 from 8 per cent, to about 15 per cent., which will augment the dividend yield from under 4 per cent, to roughly 7 per cent. The interesting point is that Klinger's 25 per cent, tax free dividend was paid out of available earnings of over so per cent. As the company has an assured home market and is developing its export trade, the dividend should rise further this year.