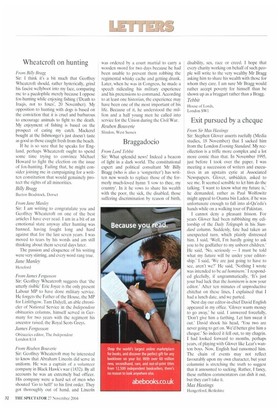 Exit pursued by a cheque

From Sir Max Hastings Sir: Stephen Glover asserts ruefully (Media studies, 18 November) that I sacked him from the London Evening Standard. My recollection is a trifle more complex and a lot more comic than that. In November 1995, just before I took over the paper, I was meeting a succession of writers and executives in an upstairs eyrie at Associated Newspapers. Glover, unbidden, asked to see me. It seemed sensible to let him do the talking. 'I want to know what my future is,' he demanded, rather as Paul Wolfowitz might appeal to Osama bin Laden, if he was unfortunate enough to fall into al-Qa'eda's hands while on a walking tour of Pakistan.

I cannot deny a pleasant frisson. For years Glover had been rubbishing my editorship of the Daily Telegraph in his Standard column. Suddenly, fate had taken an unexpected turn, which plainly distressed him. I said, 'Well, I'm hardly going to ask you to be godfather to my unborn children.' He said, 'No, seriously — I must be told what my future will be under your editorship.' I said, 'We are just going to have to see, aren't we?' He said, 'Nothing I wrote was intended to be ad horninern: I responded gleefully, if ungrammatically, 'It's just your bad luck that the hominern is now your editor.' After ten minutes of unproductive chitchat on these lines, I explained that I had a lunch date, and we parted.

Next day our editor-in-chief David English appeared in my office. 'Glover wants money to go away,' he said. I answered forcefully, 'Don't give him a farthing. Let him sweat it Out.' David shook his head, 'You two are never going to get on. We'd better give him a cheque.' So indeed it fell out, to my chagrin. I had looked forward to months, perhaps years, of playing with Glover like Lear's wanton boys. Now, English had ransomed him. The chain of events may not reflect favourably upon my own character, but your columnist is stretching the truth to suggest that it amounted to sacking. Rather, I fancy, these ruthless commentators can dish it out, but they can't take it.