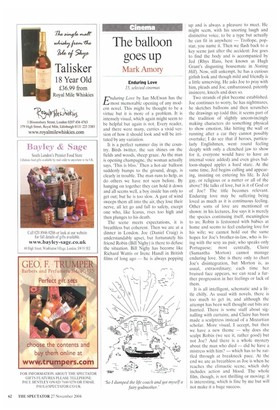 The balloon goes up

E:ndu ring Love by Ian McEwan has the most memorable opening of any modern novel. This might be thought to be a virtue but it is more of a problem. It is intensely visual, which again might seem to be helpful but again is not. Every reader, and there were many, carries a vivid version of how it should look and will be irritated by any variation.

It is a perfect summer day in the country. Birds twitter, the sun shines on the fields and woods, sheep graze. As the man is opening champagne, the woman actually says, 'This is bliss.' Then a hot-air balloon suddenly humps to the ground, drags, is clearly in trouble. The man runs to help, as do others we have not seen before. By hanging on together they can hold it down and all seems well, a boy inside has only to get out; but he is too slow. A gust of wind sweeps them all into the air, they lose their nerve, all let go and fall to safety, except one who, like Icarus, rises too high and then plunges to his death.

The scene meets expectations, it is breathless but coherent. Then we are at a dinner in London. Joe (Daniel Craig) is understandably upset, but fortunately his friend Robin (Bill Nighy) is there to defuse the situation. Bill Nighy has become like Richard Wattis or Irene Handl in British films of long ago — he is always popping up and is always a pleasure to meet. He might seem, with his snorting laugh and distinctive voice, to be a type but actually he can fit in anywhere — Trollope, popstar, you name it. Then we flash back to a key scene just after the accident: Joe goes to find the body and is accompanied by Jed (Rhys Ifans, best known as Hugh Grant's disgusting housemate in Notting Hill). Now, still unkempt, he has a curious girlish look and though mild and friendly is a little unnerving. He asks Joe to pray with him, pleads and Joe, embarrassed, patently insincere, kneels and does so.

Two strands of plot become established. Joe continues to worry, he has nightmares, he sketches balloons and then scrunches the drawings up (odd this; it seems part of the tradition of slightly unconvincingly making characters do something physical to show emotion, like hitting the wall or running after a car they cannot possibly overtake; I do see that if heroes, particularly Englishmen, went round feeling deeply with only a clenched jaw to show for it, everyone would have to have an internal voice added) and even gives balloon-shaped apples a hard stare. At the same time, Jed begins calling and appearing, insisting on entering his life. Is Jed gay, or religious or a nutter or all of the above? He talks of love, but is it of God or of Joe? The title becomes relevant. Enduring love may be suffering being loved as much as it is continuous feeling. Other sorts of love are mentioned or shown: in his lectures, Joe says it is merely the species continuing itself, meaningless to us; Robin is festooned with babies at home and seems to feel enduring love for his wife; we cannot hold out the same hopes for Joe's brother-in-law, who is living with the sexy au pair, who speaks only Portuguese; most centrally, Claire (Samantha Morton) cannot manage enduring love. She is there only to chart Joe's disintegration, but Morton is, as usual, extraordinary; each time her bruised face appears, we can read a further progression in her feelings or lack of them.

It is all intelligent, schematic and a little chilly. As usual with novels, there is too much to get in, and although the attempt has been well thought out bits are hurried. There is some stuff about signalling with curtains, and Claire has been made a sculptress instead of a Mozartian scholar. More visual, I accept, but then we have a new theme — why does she sculpt Robin (we see it, rather good) but not Joe? And there is a whole mystery about the man who died — did he have a mistress with him? — which has to be rattled through at breakneck pace. At the end we are as breathless as Joe is when he reaches the climactic scene, which duly includes action and blood. The whole film, though, is not thrilling or moving; it is interesting, which is fine by me but will not make it a huge success.