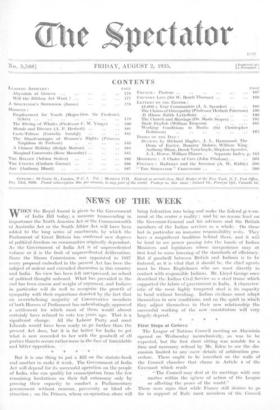 But it is one thing to put a Bill on

the statute-book and another to make it work. The Government of India Act will depend for its successful operation on the people of India, who can qualify for emancipation from the few remaining limitations on their full autonomy only by proving their capacity to conduct a Parliamentary government without rancour, perversity or blind ob- struction ; on the Princes, whose co-operation alone will bring federation into being and make the federal gcvern- ment at the centre a reality ; and by no means least on the Governor-General and his advisers and the British members of the Indian services as a whole. • On these last in particular an immense responsibility rests. They have a magnificent tradition behind them, and it will be hard to see power passing into the hands' of Indian • Ministers and legislators whose inexperience may at first lead to some lowering of the standards of efficiency. But if goodwill between British and Indians is to be fostered, as it k vital that it should be, the chief agents must be those Englishmen who are most directly in contact with responsible Indians. Mr. Lloyd George once described the Indian Civil Service as a steel frame which supported the fabric of government in India. A character- istic of the most highly tempered steel is its capacity to bend without breaking. Indian civilians must adapt themselves to new ConditiOns, and on the spirit. in which they adjust themselves to their new relationship the successful working of the new constitution will very largely depend.