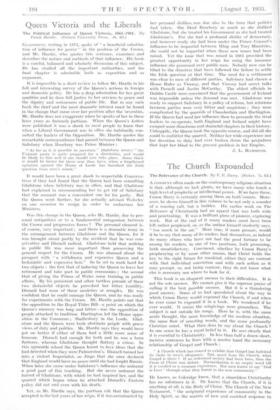 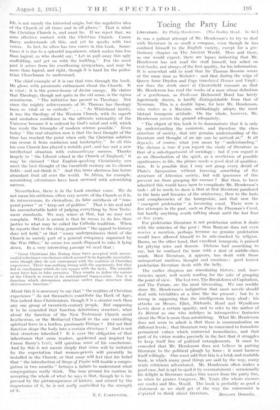 The Relevance of the Church. By F. R. Barry. (Nisbet. 7s. 6d.) A COMMENT often made on the contemporary religious situation is that, although we lack giants, we have many who touch a high level of prophetic or intellectual, power. If we have these, Canon Barry is certainly among them on both'counts, More- over, he shows himself in this volume to be not only a sounder of a rousing call, but a builder. His earlier work on The Relevance of Christianity had an appeal that was both wide and penetrating. It was a brilliant piece of pioneer, exploring work. But at the end of it many readers must have been left rather perplexed, or, as the author himself modestly says, " too much in the air." More true, if more prosaic, would it be to say that many of its readers find themselves, as indeed do many others who have not had the good fortune to be among his readers, in one of two positions, both promising, both unsatisfactory. Convinced, whether by Canon Barry's prophesying or by some other means, that Christ holds the key to the right future for mankind, either they are content with that individual conviction and with such action as it may prompt, or, not being content, they do not know what else is necessary nor where to look for it.

• This book is an eloquent answer to their difficulties. It is not the sole answer. We cannot give it the suprenne"praise 'of calling it the best possible 'answer. But it is a thundering good answer. Some of us had speculated about the way in Which Canon Barry would expound the Church, if and when he ever came to expound it in a book. We wondered if he ever would. It seems the misgivings were groundless. The subject is not outside his range. Here he is, with the same acute thought, the same knowledge of the modern situation, the same flow of arresting words, and the same profoundly Christian mind. What then does he say about the Church ? In one sense he has a royal belief in it. He sees clearly that it is essential to Christianity. In less than half a dozen short, incisive sentences he fixes with a master hand the necessary relationship of Gospel and Church

" A Church which has ceased to exhibit that Gospel has forfeited But, apart horn the Church, what

its claim men's allegiance. Gospel is there Y If no redeemed society had been born, then the Cross of Christ was defeat. Reconciliation is an empty word till it is verified in a common experience. But men learnt to say Odd is Love ' through what thoy learnt in the now community."

He knows, as Coleridge knew, that a churchless Christianity has no substance in it. He knoWs that the Church, if it is anything at all, is the Body of Christ. The Church of the New Testament, " the scriptural experience of community in the Holy Spirit, as the matrix of new and enriched response to

life, is not merely the historical origin, but the regulative idea of the Church at all times and in all places." That is what the Christian Church is, and must be. If we reject that, we miss effective contact with the Christian Church. Canon Barry understands all this, and yet he speaks with two voices. • . In fact, he often has two voices in this book. Some- times it is due to a splendid impatience, which makes him less than logical, as who should say, " Let us pull away this ugly scaffolding, and get on with the building." For the most part it arises from his overflowing sympathies, and may be more than logical, and right, though it is hard for the pedes- trian Churchman to understand.

• The chief example of it is one that runs through the book.

He glows with passionate enthusiasm about the Church. It is vital ; it is the power-house of divine energy. He claiMs

that Theology, though not quite in the old sense, is the regina scientiarum. " The initiative has passed to Theology. Not since the mighty achievements. of St: Thomas has theology

been so vital or so catholic" . "As Whitehead ' insists, it was the theology of the Western Church, with its superb and unshaken confidence in the ultimate rationality of the Universe because it is ordered by God's mind:and will, which has made the triumphs of modern science possible." 'Even today " The real situation now is that the best thought of the time has reached the point when only the Christian solution can rescue it from confusion and bankraptcy." In all this his own Church has played a notable part, and has met a new intellectual situation with extraordinary success. Thanks largely to " the Liberal school in the Church of England," it may be claimed " that English-speaking Christianity can meet the best thought of the twentieth century on its chosen fields—and out-think it." And this inner alertness has borne abundant fruit all over the .world.. for example, astonishing adventures have been crowned with astonishing success.

Nevertheless, there is in the book another voice. We do not mean his criticism, often very severe, of the Church as it is, its introversions, its clericalism, its false antithesis of " tem- poral power " or " keep out of politics." That is his zeal and his uncomfortable habit of judging everything by New Testa- ment standards. We may wince at that, but we may not Complain. What is meant is that he seems to do less than justice to what may be called the Catholic tradition. When he reportsthat to the rising generation " the appeal to history does not hold," or that " many undesgraduates think of the Church 'as merely part of a general conspiracy organized by the War Office," he seems too much disposed to take it lying down. In a very interesting passage we read that : " Croat Christians liko Bishop Gore have accepted with uncon- cealed reluctance conclusions which seemed to be logically inevitable, even though they do not correspond with tho realities of Christian experience. There was nothing wrong with the arguments, but they led to conclusions which do not square with the facts. The mistake must have lain in false premises. They sought, to define the nature of the •Church in terms of its institutional organization. But it is function which determines structure rather than structure that

Ahead this it is necessary to say that " the realities of Christian experience " dO not themselves constitute the Rock of Ages. Nor indeed does Christendom, 'though it is a stouter rock than any one group of • twentieth-century iicople. But supposing it to be conceded that function determines -structure, what abOut the funCtion of the New Testanierit Church amid heathenism, 'Or 'the Mediaeval" Church as the one controlling spiritual force in a laWleSs, passionate Europe ? Did not that

ftinction shape the body into a certain structure'? And is not that structure inherited ? It is over the obligation of that

inheritance that sonic readers, quiekened- and inspired by Canon Barry's Look, will question some of his conclusions. And. by this is not meant itiniply that some will be irritated by the expectation that' • women-priests will presently be installed in the Church, or that some will feel that his belief that " the introduction of Songs. of Praise will double a congre- gation in two months " betrays a failure to understand what congregations • really think. • The true ground for caution in accepting the whole of what he says is that, though he is im- pressed by the picturesqueness of history, and stirred by the importance of it, he is not really controlled by the strength of it.