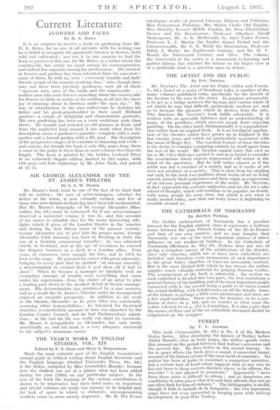 THE ARTIST AND HIS PUBLIC By Eric Newton Ni'. Newton's

The Artist and his Public (Allen and Unwin, 7s. 8d.), based on a series of broadcast talks, is another of the. many volumes published. today specifically for the benefit of the layman or the man in the street. Its purpose presumably is to act as a bridge between the layman and various kinds of art• which he may find difficult, particularly modern art, and so to increase the pleasure Which he derives from the arts. This function Mr. Newton's book fulfils admirably. It is written with an agreeable lightness and an understanding of many of the problems which prevent people from enjoying painting. On the other hand, fundamentally it is a populariza- tion rather than an original book. It is an intelligent applica- tion of the theories which have grown up. in England in the • last twenty years and which are particularly associated with the name of Roger Fry. The essential feature of these theories is-the desire to consider a painting entirely by itself apart from, the rest of the world, Mr. Newton. cannot carry this view as far as Mr. Clive Bell once carried it, and he is forced to consider the associations which objects represented will arouse in the mind 'of the spectator. But lie still writes almost as if the artist was not a member of a society and as if works of art were not products of a society. This is clear from his singling out early in the book two qualities about works of art as being crucial, namely their uselessness and their origin as expressions of an intense personal experience of the artist. Mr. Newton, in fact; represents the extreme subjective and art for art's sake school of thought, which will continue to be popular, no doubt, with many people for some time, but which is not what is really needed today, now that our ivory tower is beginning to crumble around us,