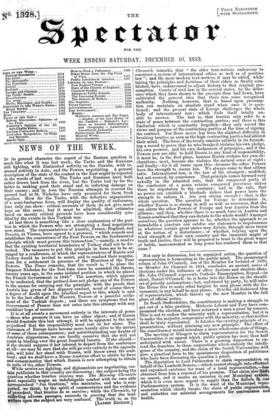 Not only in discussion, but in organized action, the question

of representation is fermenting in the public mind. The prearranged return of Sohn O'Connell, son of the Member for Ireland of 1829, as Member for Clonmel in 1854, concludes an...

Ix its general character the aspect of the Eastern question is much like what it was last week ; the Turks and the Russians still fighting, with diminished activity on the...

THE Qualm is still at Osborne; sometimes driving out, and sometimes riding out in company with Prince Albert and the Duchess of Brabant. The Duke of Brabant is now on the...

Mr. Edward Leigh Pemberton, Solicitor to the Board of Inland Re- venue, gave evidence before the City Commission respecting the claim of the Corporation to the bed and shores of...

The epistle of Sir Peter Laurie to the Times, in

behalf of retain- ing Municipal representation in the City, does not lose its force be- cause many whom the A,1derman seems to oppose agree with him. Be forgets that those 3 ff...

Although the contributions to the Preston strike keep up sur-

prisingly, it cannot be expected that they should go on for ever; and we have mentioned the evidence that the promoters of the strike are striving to extend the basis of their...

The election for the vacant seat in the Southern division of Warwick- shire took place on Saturday ; when Mr. Evelyn P. Shirley, the sole can- didate, was returned. At a large...

The Lord-Lieutenant received, on Wednesday, a deputation from the Committee of the late Exhibition, who presented an address, thanking him for all the important aids and...

The graduates of the Universities of Scotland are seeking Parliament- ary representation. To give publicity and consistence to their views, a meeting was held on Monday, in the...

FEANCE.—The chief event in Paris this week was the inauguration of the statue of Marshal Ney, on the 7th December, the anniversary of his execution. The statue stands in the...

The health of London during last week was less satisfactory than for some previous weeks. No fewer than 1414 persons died ; being an in- crease of 75 upon the preceding week,...

In the usual process of compilation from the newspapers, we have unconsciously done some injustice to Mr. Warren, the Recorder of Hull. Among our provincial news last week, it...

The first sitting of the open Court of the Commissioners

of Customs was held yesterday, at the Customhouse ; Sir Thomas Fremantle presiding. The Court will sit on Tuesdays and Fridays, and it will investigate complaints and disputes...

A fire broke out this morning in tha house of

a baker in Grafton Street, Fitzroy Square. Two men were not aroused in time to escape. One was seized by the flames and consumed; another is so burned that his recovery is...

A deputation from the parish of St. James, Westminster, headed

by the Members for that city, waited yesterday upon Sir William Molesworth, to point out to him the inefficiency of the Nuisances Removal and Dis- eases Prevention Act of 1848,...

The Gazette of last night announces that the Queen has

SATURDAY. The Times supplies us this morning with a definite account of the state of the negotiations carried on by the representatives of the Four Powers .at Vienna, and gives...

On the 29th October, at Fourah Bay, West Africa, the

Lady of the Bishop of Sierra Leone of a daughter. On the leeDecember, the Wife of Lieutenant-Colonel Clark, Commandant Royal Military Asylum, of a son. On the 24, at the...

"A Scotch Presbyterian" asks us to admit another long letter

on the sub- ject of Lord Palmerston's reply to the Presbytery of Edinburgh. The re- quest is unreasonable. Besides the very considerable demand on a limited space, never...

Private letters from Constantinople, which have reached us to the

18th November, supply some local gossip, out of which we pick a few ex- tracts. "The English are very popular here now, and no contempt is expressed at sight of the Frank...

In the lives of celebrated individuals, we may sonietimes find the ap- parently paradoxical position, that a man considered as an entirety is eclipsed by one of his own...

Smear Rums:ems FRAM! Apraanoort. Considering the prevailing intricacies of political events, the English Funds have this week displayed an extraordinary degree of firmness; the...

The old story of a man in low life being

passed off for a gentleman, and making himself ridiculous by the incompatibility of his manners with his position, is but slight material for a three-act comedy. Hence The Hope...

• The Wednesday Evening Concerts are gaining ground with the public. Thisweek, -Exeter Hall was crowded in every part, and a large portion of the audieliee consisted of persons...

tom before Christman, performed Thi SfersiaN. It was' the Society's three hundredth concert, in the two - and - twenty years of its active and iiqt,tienkial existence. A new...

REFORM DISCUSSION : OPINIONS OF THE PRESS. IN noting from time to time the progress made in the discussion of principles and schemes contributed by various public writers...

POSTERITY'S OPINION OF THE ALBERT-CHALLLS STATUE.

IT has been said that the opinions expressed respecting us in foreign parts are as the judgment of a contemporaneous posterity: according to this rule, the opinion which we...

Ir is not without reason that the condition of Durham University attraots attention. After an existence of twenty years it has dis- appointed the expectations, if not of its...

RECRUITS. Jr the charge preferred against the owners of the Melbourne steam-ship had been undefended, the case might have passed as an isolated instance of bad management, and...

HOW TO FIND A POLICEMAN.

A CASE which, occurred at Marlborough Police Office this week brings to notice an old and perpetual grievance. "A policeman is never in the way when he is wanted," is a common...

Pxw years have passed since, on grave occasions which drew people together for intellectual or philanthropic purposes, might be ob- served an aged lady of benevolent aspect,...

THE last number of Norton's Literary Gazette contains an interesting re- port of what is called a" Librarians Convention," which was held at New York in September last, and...

BAKER STREET FROM THE PIG POINT OF VIEW. FOR the

last few years critical visitors of the exhibition in Baker Street have remarked a decided improvement in the diminished attention to fat and increased attention to fibre. Bulk...

SIR—There are two fallacies of frequent occurrence in controversial dis- cussions which are a very fruitful source of misunderstanding and strife. These (if one may venture to...

Sin—I should be sorry indeed were the dust raised by Mr. Cookeeley's angry denunciation of your review of his " Pinder," to obscure the important question you so pertinently...

NEW ZEALAND CENSUS. Income-tax gfifes Dublin, December 8. ' Sni—In your last number you refer to and enlarge upon the results of "the New Zealand census of 1852." In justice to...

STATE OF THE CHURCH OF ENGLAND.

5th _December 1853. Sin—Agreeing with you in the estimate you have formed of the character to be attached to Mr. Maurice's dismissal from his Professorship, I rejoiced to read...

SIR—Allow me to add to the very able notice of the recently-published Blue Book on the Licensing System, which appeared in your paper of De- cember 3d, a few words explanatory...

THE SOURCES OF STRIKES.

1 Adam Street, Adelphi, 5th December 1853. Sin—The strikes in the North appear about to end as most strikes do, not in a peaceful adjustment, but in the discomfiture of the...

AnatIRALTV, Dec. 5.-The following promotions have this day taken place conse- quent on the death, on the 4th instant, of Vice-Admtral J. IL Dacrcs-Rear-Admi- ral of the WhiM Sir...

County of Middlesex. Printer, at the office of JOSSPR CLATTON, No. 10, Crane Court. in the Parish of St. Dunstan', in the West, in the City of London; and Published by the...

WALLACE'S AMAZON AND RIO NEGRO. * EXCEPT a fire at sea on his homeward voyage, with the consequent loss of his collection, there is not much incident in the travels of Mr....

TRE reader may look upon this title as a sounding piece of affecta- tion or claptrap. " Anadol " is Asia Minor ; and if "the last home of the faithful" means that the Turks are...

NIEBUIER'S LEC'TIIRES ON ANCIENT ETHNOGRAPHY AND GEOGRAPHY. * DR. ISLER, the

German editor of these Lectures, for some time hesitated whether or not to publish them, because they necessarily went over ground already traversed, and treated of topics...

Tax first volume of this history of the Constituent Assembly is not equal to Lamartine's previous works on the modern history of France. Part of its inferiority may be owing to...

Booxs. Life in Abyssinia; being Notes collected during Three Years' Residence and Travels in that Country. By Mansfield Parkyns. In two vo- lumes. With Map and Illustrations....

The Pianist's Handbook. By Carl Engel. Every new book of

instruction should have some specific object not accom- plished by those already extant ; otherwise it is but a useless repetition of what has been said before. The book before...

posed by Edward Francis Fitzwilliam. This opera was lately produced at the Haymarket, with small success. Mr. Buckstone is not acting with his usual judgmentthis season, in...

The Universal School of Music. By Dr. Adolph Bernhard Marx, Pro- fessor of Music at the University of Berlin. Translated by A. H. Wehran. Dr. Marx of Berlin stands at the head...

The Creation ; an Oratorio. By Joseph Haydn. A new

edition, by John Bishop of Cheltenham. This is the most elegant edition of Haydn's greatest work that ever has appeared in England, setting entirely aside its marvellous...

A Treatise on the Science of Music. By Daniel M.

G. S. Reeves. This intelligent and able little work will also be of value to the musical student. Not a mere digest of the rules of the art, it deduces them from scien- tific...