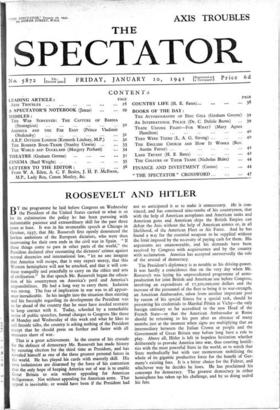 B Y the programme he laid before Congress on Wednesday the President of the United States carried to what is so far its culmination the policy he has been pursuing with...

NEWS OF THE WEEK N OTHING can detract from the brilliance

of the co- ordinated strategy, by land, sea and air, which led to the fall of Bardia last Sunday. General Wavell's dispositions attained their success so flawlessly and...

The Re - making of Britain It has been suggested that there

might be some overlapping between Mr. Greenwood's field of inquiry and that of Lord Reith as Minister of Works and Buildings. Planning for re- building might indeed be regarded...

To Speed Up the War Effort

There has been no concealment of wide-spread dissatisfac- tion about progress in war-production, distribution of man- power and other urgent problems of the Home Front. The...

A Soldier and a Statesman

In the New Year message broadcast from Cairo by General Sir Archibald Wavell, Commander-in-Chief in the Middle East, one heard the inspiring voice of a soldier who combines...

General Metaxas, the Greek Prime Minister, has stated in a Press interview what are described as the war-aims of Greece. They were expressed in the simplest terms—to assure the...

Rumour in the Balkans

The Balkans have been recently a fertile source of con- flicting rumours, many of them deliberately set about by the Germans to cause doubt, fear or suspicion. To add to the...

The Author of " Creative Evolution "

The death of Henri Bergson at the age of 82 removes a philosopher who had a far-reaching influence on modern thought in the earlier years of the century. He reached intellec-...

The Planning of Public Health

The report of the Chief Medical Officer of Health issued last Tuesday shows that up to the present shelter life has not led to so much increase of disease as had been feared—but...

Why America Should " Buy British "

Mr. Oliver Lyttelton, President of the Board of Trade, in a broadcast to Canada and the United States last Sunday, appealed to a principle which President Roosevelt himself...

What was Germany's motive in dropping bombs on Dublin and other parts of Eire last week? The Berlin suggestion that the bombs were British is foolish in view of the fact that...

B RILLIANT as the continuing successes of our three co-ordinated services in the Eastern Mediterranean are, both in achievement already registered and in the promise of further...

I am glad to see that some religious papers by

no means to be suspected of pacifism are joining in protest against the B.B.C.'s alleged ban on certain prominent religious leaders of different denominations on the ground of...

Is there, I wonder, some subtle distinction between war babies

and war-babies? I was a little startled at a newspaper heading this week, declaring " We Want More War Babies," for the war babies, or war-babies, of the last war were the fruit...

Quotation of that rather hackneyed epigram, by the way, is

rather tragically apposite at a moment when the Nazi-fed flames have destroyed so much of its truth. But it serves to remind one of Dr. Inge's brilliant emendation. " Whenever I...

I T is too soon still to assess fully or finally what Lord Baden- Powell did, first for the British Empire and then for the world, when he founded the Boy Scout movement...

I have referred before now to the question of waste

in the Army, with special reference to petrol. Here are some solid facts that seem worth attention. At a police-court in one of the Home Counties last week a Canadian soldier...

The news that Major Ronald Gartland, M.P., is not, as

THE WAR SURVEYED : THE CAPTURE OF BARDIA

By STRATEGICUS I N spite of the fine impression made by the capture of Sidi Barrani, there must have been many who held their breath until the occupation of Bardia was...

AMERICA AND THE FAR EAST

By PRINCE VLADIMIR OBOLENSKY HE warning of the late Lord Lothian in his recent speech that Britain and America may be confronted with a two- ocean attack launched...

By KENNETH LINDSAY, M.P. A T last, after two months' outside agitation, the Govern- ment have resolved an outstanding conflict between two Departments responsible for control...

By STANLEY UNWIN J UST as a spoilt child who cannot get his own way delights in destroying things, so the Nazis in their anger over their failure to invade England seem to...

They Knew What They Wanted." At the Plaza. — " Gold Rush Maisie." At the Empire. IT is a lively pleasure to see Charles Laughton in an acting part once again. His film...

THE second edition of Diversion is a great improvement on the first. Miss Edith Evans instead of reading us poetry recites one of Elizabeth's speeches to the Commons, which she...

THE THEATRE 4 , Berkeley Square." At the Vaudeville. THE name of Henry James has never, so far as I know, appeared on the programme of Berkeley Square, though the story was...

4m,-I confess to some disappointment in the fact that golf-clubs Fiave not, so far as I know, offered to put at the disposal of the nation the golf-courses for the purpose of...

FLATS OF THE FUTURE

Snt,—John Armitage, in his article, " The Family House," speaks of a stevedore saying " We all want a little house and a bit of garden," and " We all hate these flats." Here, we...

SrR,—I strongly support your view that the Elgin Marbles should

be offered to the Greek Government. Further, may I add that I think the offer should be unconditional, and that a nation that has done so magnificently in the field may be...

a para- graph in " News of the Week " of vital importance to the world on "Peace Aims "; these are founded on the Pope's statement just a Year ago, and are endorsed by all the...

Snt,—In all the correspondence I have seen about the Elgin Marbles, nobody seems to have thought of what would be happiest for the figures themselves. I have always felt they...

SIR, —As you say in your issue of December 27th, the points adopted by the Anglican and Catholic and Free Church leaders in The Times letter of December 21st, on the foundations...

Sta,—It seems to me that those good people who are

everlastingly calling upon the Government to declare its " war aims " show con- siderable confusion of thought. The essential war aim of the country has again and again been...

Snt,—Most people, I am sure, will have read Dr. Edwyn Bevan's thoughtful letter on " A New Order " in your issue of December 27th with a great measure of approval. The crux of...

Sm,—With reference to the mild controversy on the subject of IT, surely the credit for IT'S invention (though he might not have coveted it) belongs to Rudyard Kipling? I quote...

In view, perhaps, of possible difficulties about coal, one or two cor- respondents have asked me to include here a note about woods for burning. The log fire is a romantic...

the issue of January 3rd on " The Burned City Churches " you remark that no restoration can give us back Wren. This seems to me quite untrue. One cannot recover a picture from...

Mr. Lockley's list of those birds which suffered most is also interesting, and again, I think, a little surprising. One would expect to find among them such fragile creatures as...

Sm,—To praise The Spectator would too often be to gild the lily : and neither task does any moderately sensible man take in hand. With that premise, may I express a feeling of...

SIR, —On July 26th you published a letter from me concerning a Winchester College boy, a German Jew refugee, who had been seized by the Hants police and subsequently deported to...

Some readers have searched in vain for The Gardeners' Calendar, which I mentioned here a week or two ago. It is not very surprising that they have been unable to find it, and I...

Expert Report That birds are very little affected by air-raids, and that they " get used to anything which does not directly interfere with their move- ment," is the expert...

Readers are again reminded of the necessity of ordering " The Spectator " regularly, since newsagents can no longer be supplied on sale-or-return terms.

Rebels and Eccentrics Autobiography. By Eric Gill. (Jonathan Cape. tzs. 6d.) ROMAN CATHOLICISM in this country has been a great breeder of eccentrics—one cannot picture a man...

THE chief purpose of this book is to show that the " police principles " embodied in the establishment of the Metropolitan Police in London are applicable to international...

Their Finest Hour. Edited by Allan A. Michie and Walter Graebner. (Allen and Unwin. 7s. 6d.) THE narratives in these five books are all in the first person. One is the work of...

No one knows the British • Trade Union movement—or for that matter the international—better than Herbert Tracey. From the vantage point of Chief Publicity Officer, he now sees...

From Plough to Press Room

The Machinery of the Church

Tins is a book of the " What an X requires to know about Y" variety, and excellent in that kind. Some people like facts, others prefer estimates and impressions. Miss Ady is...

By CUSTOS NOBODY should be surprised at a moderate fall in banking profits. Gross earnings in 1940 were doubtless helped by. the use of a substantially larger volume of...

The Colours of Their Trade

Exit to Music. By Neal Shepherd. (Constable. 75. 6d.) Now that the redoubtable Mrs. Bradley seems to be feeling her years, a new psychiatrist-detective is very welcome upon the...

The ten pamphlets on British institutions published by Messrs. Longrnans,

which were the subject of Mr. G. M. Young's article, "A Fair Picture," in The Spectator of January 3rd, were pre- pared by the British Council.

SOLUTION TO CROSSWORD No. 94 SOLUTION ON JANUARY 24th

Book Token for one guinea will be given to the sender of the first correct solution of this week's crossword puzzle to be opened. Envelopes should be marked with the words...