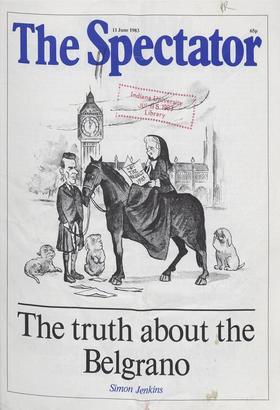 `I, as a government'

A part from Mrs Thatcher herself, possibly her husband Denis and one or two members of the Conservative Party, the most faithful followers of the Thatcher cult are to be found...

W hen it was once suggested by some eager young Conservative smear- monger that the Tories might discredit Lord Palmerston by producing evidence of a fur- tive love affair,...

The orthodox reflex Auberon Waugh F leeing from the election last Sun- day I took refuge in the Sunday Times schools essay competition. The newspaper had offered £4,000 in...

Be of good cheer! Colin Welch 'Once to every man and nation comes the moment to decide In the strife of truth and falsehood for the good or evil side.' T he stirring words of...

Charles Moore T uesday morning's Conservative press . co nference, the penultimate of the cam its - Paigh, lacked the excitement of predecessors. The Prime Minister was doing...

The collapse of education

Richard West T he left-wing Scotsman Jimmy Reid was quoted by Auberon Waugh (Spectator, 4 June) as having said something 'that left a chill. Glasgow, he said, was still a city...

Vernon Bogdanor I n British general elections between 1945 and 1974 only two possible outcomes were likely — a Conservative or a Labour government. In this week's general...

John Stewart Collis I t came as a shock to me when I heard for the first time someone being described as the 'speech-writer' of an eminent politician. It gave me as much of a...

The truth about the Belgrano

Simon Jenkins S ooner or later someone's self-control L. , had to give. All parties had struggled to keep the Falklands out of the election cam- paign, but as Labour's...

Paul Johnson T his lacklustre election has produced many new varieties of tedium. One is the leaked 'secret' report, which turns out on examination not to be secret at all,...

The spy who lost me

Murray Sayle Tokyo C omparatively few of the journalists 1 i know are spies, but the reverse, alas, is far from true. In mediaeval times, assassins took jobs as court barbers,...

A curious story comes from Pesth of a society of six lads, between sixteen and eighteen years of age, who agreed together to throw all their spare money into a common fund and...

Amit Roy Warsaw S ome 700 foreign journalists are pre- paring to descend on Poland adding to the 120 permanently based in Warsaw, to cover the Pope's return to his native land...

The road from communism

Timothy Garton Ash Belgrade W hen you first meet the white-haired old man in his quiet Belgrade flat, with its parquet floors, bookshelves packed with literature from every...

A path to Rome

Louis Jebb E ighty-two years ago, my great-grand- father, Hilaire Belloc, walked from his old garrison, Toul, to Rome — a journey which resulted in his celebrated book The Path...

Sir: I see from your issue of 28 May that A. J. P. Taylor has infringed Auberon Waugh's monopoly of slinging mud at Duff Cooper. I wonder what 'evidence' Mr Taylor has seen that...

Sir: It remains a pleasure to read Alan Gib- son on cricket but in his review of the 1983 Wisden (14 May) he is mistaken in sug- gesting that schools cricket (which as he says...

Sir: I wonder how many other readers of the Spectator chess column are becoming like myself increasingly exasperated by endless exposes of Ray Keene's latest games (another two...

Sir: Given a decade or two dry-stone walls will in their turn have replaced the bar- barous mess of barbed wire in P. J. Kavanagh's area (Postscript, 21 May). As more and more...

Sir: Richard West's article (Torn-again socialist', 28 May) on Bern and Bristol refers to the ruination of inner-city schools. `Two of the grammar schools are now con...

Beginning to see the light

Philip Larkin The Jazz Book Joachim E. Berendt (Granada £12.95) T his is the ninth revision of The Jazz Book, which has sold over two million copies in 30 years: a pretty...

AMONG THIS WEEK'S CONTRIBUTORS

Harold Acton is the author of The Soul's Gymnasium. Bel Mooney is writing a life of George Eliot. Her novel The Windsurf Boy is published shortly. Francis King's books include...

Giving, taking — odd that these should prove A burden yet there's burden in so much That looks contented. Even gratitude Can, in its receiving, feel the touch Of helplessness...

open to non-subscribers Take out a subscription to The Spectator and we will send you a free, signed copy of BESIDE THE SEASIDE OTHER TALES by Roy Kerridge Subscription...

On the carpet John McEwen The Eastern Carpet in the Western World, from the 15th tO the 17th century (Hayward Gallery [Arts Council] till 10 July) Carpets in Paintings...

Lustrous Giles Gordon King Lear (RSC: Barbican) The Dining Room (Greenwich) T he lights go up on the throne of Albion. In the chair is Cordelia (Alice Krige, looking like John...

Over and over Richard Ingrams B y the time most of you read this the -Lielection will be over and Mrs Thatcher will have had her landslide, or not — a remote possibility....

Well placed Taki New York M y seven-year-old daughter rang me when I was in London last week and told me in no uncertain terms that if I didn't show up for parents day at her...

Train in Spain Jeffrey Bernard I t's widely claimed that it was W. C. Fields who uttered the immortal words, Never give a sucker an even break,' but it isn't so. God murmured...

Happy hypocrites P. J. Kavanagh T suppose it is generally accepted now- adays that a man who suspects everyone else of double-dealing and self-seeking is likely to have a...

No. 1273: Cinquain Set by Jaspistos: A cinquain (America's answer to the haiku) is a five-line stanza, the lines having respectively two, four, six eight and two syllables. You...

To enable competitors to economise on postage, entries for one or more weeks of the competition and crossword may be posted together under one cover ad- dressed 'Competition...

Jaspistos reports: Competitors were challenged to name the author and approx- imate year of composition of the poem 'A Dirty Night on the Fastnet Rock'. The answer, which it...

A prize of ten pounds will be awarded for the first correct solution Opened on 27 June. Entries to: Crossword 611, The Spectator, 56 Doughty Street, London WCIN 2LL....

The Chequers Chess Competition Next week we shall publish details

of a problem-solving competition with a monthly prize of £200, together with the first set of problems and full in- structions for entering.

Solution to 608: Half-backs Half of the clued lights are

Talio alestinians started killing each other I . in Lebanon: the rebellion, by some units of the Palestine Liberation Organisa- tion, against its chairman of 14 years, Yasser...