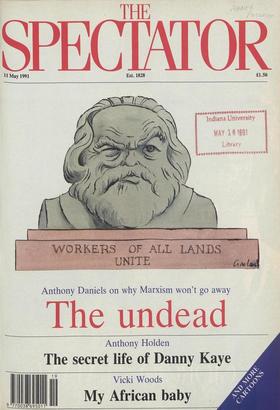 C onservatives fared badly in local elec- tions, losing 890 seats overall, while the Labour Party showed a net gain of 490 and the Liberal Democrats and the Raving Loony Parties...

Captain Ashdown leads his cosmic forces into the New Age NOEL MALCOLM I t is hard to believe everything one reads in the newspapers, but I make a special effort with the...

T his time last week local election fer- vour rose to nearly room temperature in our neck of the woods. We did not receive any canvassers personally, though I know several...

All the news you want to read AUBERON WAUGH I n the course of 1970 I was writing weekly or fortnightly columns in six places — The Spectator, the Sun, the News of the World,...

HE'S NOT DEAD, YET

Anthony Daniels laments that Marx's philosophy is still destroying minds and nations, despite exaggerated reports of its death THE repudiation of communism in East- ern Europe...

Stephen Robinson finds that adversity has enhanced the vice-president's popularity Washington FOR most of last weekend and well into midweek, the American television net-...

J. B. Kelly finds that living in south-west France is anything but paradise Marssac-sur-Tarn RURAL France, as everyone knows by now (and if they don't, they have not been...

THE LEFT HAS FOUND A MARTYR

James de Candole dismisses claims of a witch-hunt in Czechoslovakia THE CASE of Jan Kavan, the former Czech dissident named in the Czechoslo- vak parliament as a secret police...

William Dalrymple discovers a new medium and message on India's hustings New Delhi THE truck arrived soon after darkness had fallen and the cicadas had begun to grind. The...

THINNING OUT THE MENTAL PORRIDGE

Simon Helfer thinks the Conservative Party is choosing its candidates in the wrong way IN HIS biography of Mr Major, Mr Ed- ward Pearce recalls how the Prime Minis- ter won...

Vicki Woods on her surprise at acquiring an African child SOME years ago, my husband began to receive letters from a foreign part; letters he was careful to crumple up and hurl...

David Norwood finds gentlemanly English ideas of education holding back Grandmasters like himself IT MUST be related to what we term the `English Disease'. It has permeated...

Sandra Barwick visits one of hundreds of run-down estates denied available money SLUMS no longer exist. Like the words beggar, cripple or lunatic, slum has been dropped by the...

A reader received the following letter from a firm in Santander: Dear Sir, I remittance them the datum that You to do demand with the desire of to please resulting the selfsame...

LAST WEEK, my prison doctor friend was struck down by one of those myste- rious illnesses (viral, or course) which afflict working men when they want to go to the races, and I...

The press: Paul Johnson surveys the chilly outlook for quality nationals AP 1 ER the big profits and the heady expansion of the post-Wapping revolution years, gloom has...

Christopher Fildes will resume his column next week.

Sir: John Pilger and David Munro cite my work in

Jane's Defence Weekly in your issue of 20 April during the course of their rebuttal to Derek Tonkin's article, The apotheosis of pilgerism'. My research on the subject of covert...

Sir: As a former eurocrat I enjoyed Ian Buruma's article, 'Britain against the Federasts' (13 April) and agree fully with his Portuguese driver that money is mainly the...

Sir: Do we take Derek Tonkin seriously? As he's an unofficial voice of the Foreign Office, I suppose we have to. In his latest letter (4 May) Tonkin still can't get it right...

Sir: Vicki Woods' article on the sex- obsessive tabloids was admirable as far as it went, but she did not reach any conclu- sions. The fact of the matter seems to be, and this...

The truth about Crete

A Prince among men

Sir: Mr Wilson's reference to Prince Charles (Diary, 20 April) was pompous, snide and shabby, and above all cowardly. He rings the bell and runs — probably sniggering at his own...

Sir: May I add a postscript to Jeffrey Bernard's tribute to the generosity of Graham Greene (Low life, 13 April)? Some years back, in the summer before starting university, I...

Sir: Charles Moore suggests that I 'get published now and again by dint of writing to every publication the entire time'. (Another voice, 6 April). This is quite untrue and...

Sir: I was sorry to see that your reviewers, Richard Lamb (March 30), whom I have admired as a valuable researcher and historian of World War II and its political antecedents,...

Sir: It is not surprising that Roy Jenkins (Books, 13 April) found the Emperor of Japan knowledgeable about croquet. Hiro- hito would not have needed a brief from his Court...

Resisting most temptations Rupert Christiansen GOETHE: THE POET AND THE AGE, VOLUME I, THE POETRY OF DESIRE by Nicholas Boyle OUP, £25, pp. 807 T he British, I think, long ago...

Not quite forging the links

Fiona Maddocks MOZART AND VIENNA by H. C. Robbins Landon Thames & Hudson, f16.95, pp. 208 S ome books are bad because they are badly written. Some are bad because, to put it no...

A word to the whys

Bryan Appleyard THEORIES OF EVERYTHING: THE QUEST FOR ULTIMATE EXPLANATION by John D. Barrow OUP, f14.95, pp.234 T he strange and apparently unstoppable success of Stephen...

Yonder peasant, who is he?

When people whom we should not know but do know, come through the wall and give advice which we did not ask them for, and when the room contracts into a cubicle then playfully...

The battle of all mothers

Anita Brookner THE BATTLE FOR CHRISTABEL by Margaret Forster Chatto & Windus, f13.99, pp. 266 T he tone of Margaret Forster's last novel, Have the Men Had Enough?, was jus-...

More mongrel than whippet, their raked line Top-heavied by equipment, they slide off Our TV screens into silver horizons we have To imagine. Though siblings, they confine...

Sheltering from the revolution

Philip Mansel JUNIPER HALL by Linda Kelly Weidenfeld & Nicolson, £18.95, pp. 137 T he French émigrés included some of the ablest men of their day. Prodigies such as Talleyrand,...

Frederic Raphael PATRIMONY by Philip Roth Cape, £13.99, pp.238 J ews also have fathers. Sometimes they survive the women who, according to the mythology, both sustain and...

Truth about Olivier stranger as faction

The resigned charm of a very cross-section

Liliana Brisby RUSSIAN VOICES by Tony Parker Cape, f15.99, pp. 481 H alf a century ago Winston Churchill admitted that he was baffled by Russia: it was 'a riddle wrapped in a...

Museums Pay and display James Hamilton on the revamping of the Natural History Museum A year after its corporate plan split the scientific and museum worlds, the Natural...

A dedicated lot Marcus Berkmann Y ou can tell that Alison Moyet is an altogether more cheerful and confident soul these days, and not just by listening to her new album....

The Plough and the Stars (Young Vic) Harps and guns Christopher Edwards H ere is an excellent revival of one of Sean O'Casey's seldom performed plays. O'Casey provided in his...

Victor Pasmore (Serpentine Gallery, till 27 May) 15 June) Mind over matter Giles Auty A dmirers of the life's work of Victor Pasmore tend to claim a unity for it which mere...

Moody and magnificent Gabriele Annan T he Ballad of the Sad Café has a classy input: the original story by Carson McCullers rates as literature, not pulp. The producer is...

Spy wars Martyn Harris I n Robert Cecil's biography of the spy Donald Maclean, he observes that when Maclean was at the British Embassy in Washington it was probably his...

Gentleman player Taki ack in the good old days of the late Fifties, I lived in a charming house off the Avenue Foch, in gay Paree. Its name was La Residence du Bois, and it was...

In deep water Jeffrey Bernard I am on the move yet again at the end of the month. What I need is a road manager. As far as accommodation is concerned the past five years have...

Larger than life Zenga Longmore I was ushered into the dressing-room of the American opera star, who has received ecstatic reviews for his portrayal of Husky Miller. Gregg...

Food and Drink Exhibition NEVER mind what Norman Lamont or the CBI say: the fact is that you just know we're in the middle of a serious economic recession when the big story at...

Mag trade Raymond Keene I t is remarkable what can be found in the byways of the three top English language chess magazines — New in Chess, the British Chess Magazine and...

This is the title of a real poem with the following rhyme-scheme: gasp, ache, make, asp, grasp, bake, cake, hasp, abo- minable, woes, nose, spell, sews, hell. You are invited to...

Clough's the man Frank Keating A CITY chap said on the radio the other day that if British business was run by a gabble of Brian Cloughs then our manufac- turing would have...