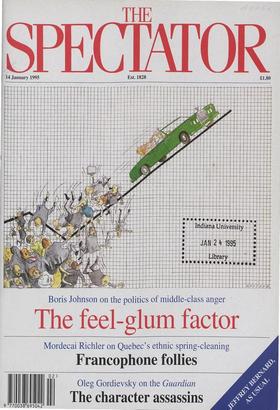 `There must be some mistake, officer, you've got the right man!' M r John Major, the Prime Minister, attempted to placate opponents of Euro- pean integration by suggesting that...

RICHARD LITTLEJOHN T he News of the World has revealed how Gerry Malone, the health minister, attend- ed a black-tie function featuring a 'live les- bian sex act'. I pass no...

Now the protesters have a new group of creatures who will never answer back CHARLES MOORE We are invited to believe that Mr Walde- grave is hypocritical and cruel. No matter...

The British middle classes are divided into the many, the Feelglums, and the few, the Feelgreats. It does not augur well for the Conservative Party, argues Boris Johnson IT IS...

TROUBLE IN ANY LANGUAGE

This year Quebec is to have a second referendum on its sovereignty. Mordecai Richler anticipates a horrible time for all QUEBECOIS SEPARATISTS have long insisted that theirs...

THE OTHER PRINCE CHARLES

Simon Sebag Montefiore meets the Chechen Republic's 'Ambassador-at-large to the EEC', a man with a most unusual diplomatic pedigree `SOMETIMES, I feel like an ambassadori- al...

The Labour leader seems to be the one man who is not confident that he will be Britain's next prime minister, says Anne McElvoy THERE WASN'T an awful lot to do of an evening...

`Mummy, is it all right to write alright as one word?' `No and yes, 0 nematode of my con- centration,' I answered, looking up from a muffler I was knitting for Veronica. `Now...

WHEN WILL the politicians learn to see the enormous disadvantages of political screaming? Again and again, it has been made plain to demonstration that if a man will only work...

IT'S GOOD to know that in these times of hectic and disorientating change, some things remain as they have always been. I refer, of course, to the traditional Yuletide domestic...

What have vulgar abuse, Newt Gingrich, stretch-rubber and ectomorphs in common? PAUL JOHNSON O ne of my pleasures as a historian is to observe the many ways in which the young...

Subsidence at the house of Warburg, or just things that go bump in the City? CHRISTOPHER FILDES T he man who is his own lawyer is said to have a fool for a client. On that...

Sir: I bet most of your growing band of readers

welcomed with relief Lord Char- teris's indiscretions last week: 'The Queen Mother is aware that . . . the Prince and Princess of Wales are going to divorce. She is quite...

Sir: 'Not everyone in the country knows what the Guardian

is' (Letters, 31 Decem- ber). Quite so. But everyone at the BBC knows what the Guardian is, because that's where their jobs are advertised. If BBC jobs were sometimes...

Sorry state of a fez

Sir: Mr Paul Johnson is mistaken in his belief that the Times 'turned down' the story of Mr Jonathan Aitken having his bill at l'Hotel Ritz paid, at least in part, by a Saudi...

Sir: I have met the Duchess of York only once,

and found her sweet and kind and not at all 'vulgar'. I do not think that Lord Charteris was betrayed by your reporter, and I agree with her that he is 'quite wily'. One of the...

Sir: I suppose that there could be a newspa- per

proprietor from whom Paul Johnson takes a shilling who actually lives in Britain, but I doubt it. To think that the Murdoch, Black or Rothermere press 'normally' con- vene the...

Sir: Alan Clark's review of Ginny Dougary's book The Executive Tart, in your issue of 24 September, has recently been shown to me. Last June — I believe with some justification...

Sir: I do really rather hate the press, except for The Spectator. I read of Noreen Taylor's article on Lord Charteris in the Times before I received my copy of your publica-...

Sir: Thanks to Ian Hislop for the timely piece on his refusal to wear a red ribbon for World Aids Day (Arts, 31 December). Can I suggest that he wears a 'D' for diarrhoea on his...

Sir: I am sorry that my revered colleague John Simpson (Noel Coward was a spy, too', 17/24 December) thinks that until now `Noel Coward appears never to have been associated...

Sir: The account by Mr Jacob Morrin of a distinguished

Sir: How splendid to read Mr Gerrard's `We murderers are not all bad' (7 January). I have for the past year found myself working in a prison for lifers — murderers. I am not a...

Cash's article you have allowed to be printed. This is exactly what freedom of speech, freedom of the press and civilisation are all about. Tom Wellstead Le Coin Fleuri,...

Sir: I.I. Muraben is right to be proud of the worldly success of his fellow Jews, but wrong to attribute it to the bracing effects of adversity (Letters, 31 December)....

Sir: Jeremy Paxman's guide to the wiliness of politicians in

interviews alludes to the existence of the politicians' closed shop. It is worth recording explicitly their insistence on discussing issues on radio and television current...

`To hunt, to bathe, to gamble, to laugh, that is to live' SIMON JENKINS I have spent a week under the rolling thunder-clouds of Carthage, seeking relics of its degenerate...

So, back to the shop

The return of the trolls

David Caute SOPHIE'S WORLD: A NOVEL ABOUT THE HISTORY OF PHILOSOPHY by Jostein Gaarder Phoenix House, £16.99, pp. 403 E r the best part of a century, post- Ibsen, we have...

In any group there are the beautiful and the plain, the strong & weak, smart as a trinket & dumb as a clam. Agreed. But there's little agreement who they are or correlation with...

From Russia with regret

Nicholas Fleming FREE TO TRADE by Michael Ridpath Heinemann, £10, pp. 345 T ime was — not so long ago — that when a writer brought out his first novel the done thing was to...

Galleries London's pleasure dome Neil MacGregor believes the National Gallery offers everybody an opportunity to take themselves and their experience seriously A English...

Where size counts Alistair McAlpine I am tempted to feel sorry for John Major, but in one respect only. He feels that in the four years he has been Prime Minister, holding...

Julia Condon (Long & Ryle, till 11 February) Wendy Connelly (Bernard Jacobson, till 31 January) Only if it's fun Giles Auty L ast week I quoted the art critic for The...

Raving to chants Peter Phillips . lave you got your copy of Canto Noel or Canto Gregoriano yet? I know I have. They were sent to me by the EMI Classical Division in the hope...

Peter Cook Ian Hislop P ete: Have you seen that bloody Leonar- do Da Vinci Cartoon? Dud: No. Pete: I couldn't see the joke. Went down there. Nothing. Dud: Well of course you...