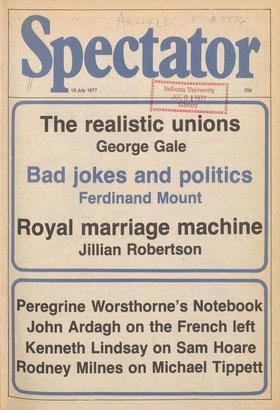 The offences of defamatory, seditious, obscene and blasphemous libel are old. Behind the notion of the criminal offence is the idea, or the consideration, that some things are...

Calamity by three votes John Grigg The miners have a habit of reaching decisions as disastrous for themselves as for the country by agonisingly narrow margins. In January 1972...

Cruelty to the old Auberon Waugh Of all the problems besetting our poor, battered country, I should have thought that one of the least urgent was the problem of moving its old...

Richard West When the British troops arrived in Saigon in September 1945, they found that the Japanese had already surrendered power to a Vietnamese committee owing allegiance...

John Ardag h Paris The polemics aroused by their revamping this month of their Joint Programme show once more what utterly different animals French Socialists and Communists...

George Gale In February 1974 Mr Heath went to the country, despite the possession of a comfortable and secure parliamentary majority which depended upon no pact with the...

John Torode So Jack Jones has emerged as the moderate martyr of the trade union movement. He was the man who divided his delegates and wrecked his own valedictory conference...

The state's right to vengeance

Jonathan Benthall Amnesty International says that it `opposes the use of torture and the death penalty in all cases and without reservation'. The work of Amnesty in opposing...

Nonchalanguage the anatomy of political jokes

Ferdinand Mount Political debate is peculiarly vulnerable to good jokes. For one thing, good jokes are rare. Political activity is so incessant and time-consuming and the...

Jillian Robertson Spare a thought for Prince Charles. Already in his late twenties and living in an age when teenagers are almost expected to ignore their parents' wishes as to...

Sir: The events at Grunwick demonstrate the folly and weakness of Mr Reginald Maudling in surrendering to the picketers of the power-stations when he was Home Secretary and thus...

Sir: Discussing the current state of the press, Richard West (9 July) honours me by suggesting that I should be asked to lead CARP, the Campaign for a Real Press. In fact...

Sir: Richard West's excellent article (9 July) on the redundancy of the National Union of Journalists was marred by his dismissal of the Institute of Journalists as a 'rival' to...

Sir; In his defence of the British Foreign Service (Letters, 18 June) and in particular of his tenure of the British Embassy in Bangkok, Sir Arthur de la Mare draws a couple of...

Sir: The homosexual minority in this country is deeply indebted to Leo Abse for guiding the Sexual Offences Bill of 1967 on to the statute book. His yiews demand attention and...

Sir: Your reviewer Francis King (9 July) regrets that Desmond Stewart's biography refers to details of T. E. Lawrence's sexual life which could better be 'consigned to...

Sir: I must take issue with Adele Wayman (Letters, 9 July) over her condemnation of 'alright'. This word, used ironically by George Gale, can be defined as 'meeting a grudgingly...

Sir: An ironic postcript to your story (25 June) of the Welsh National Opera, the American singers and the actors' union, Equity. Following the union's ban on the two singers...

Sir: Your discovery (25 June) of the true locus of liberalism in Mrs Thatcher is too shallow. The permanent feature of British Liberalism is not its adherence to a set of...

A matter of style

Sir: Not yet having read Joshua Logan's autobiography, Josh, reviewed by Benny Green in the 2 July Spectator, I am in no position to judge whether or not it is as appalling as...

The fruits of war Adam Fergusson Group Captives: The Re-education of German Prisoners of War Henry Faulk (Chatto and Windue £7,50) Their reaction was mixed when in August...

A life of crime

Auberon Waugh No Jell for Thought Lev Kopelev (Secker and Warburg £6.00) There are many reasons for reading Lev Kopelev's fragment of autobiography, edited from a much longer...

Benny Green As a small boy I had no idea, when I hungered after romance, what the adults were up to who wrote children's books. Of course all their efforts to palm off on us...

Peter Ackroyd Falconer John Cheever (Jonathan Cape £3.95) The reasons for a novel's popular success are generally more interesting than the novel itself. And when John...

David Spode The CluranIc Art of Calligraphy and Illumination Martin Lings (World of Islam Festival £20.00) Calligraphy, the art of endowing the written word with an expressive...

Tippett at the top Rodney Milnes The Ice Break (Covent Garden) Opera is so complex a system of communication that audiences tend to take what is given to them at face value....

Ingrowing John McEwen Art-Language was a group formed at Coventry School of Art in the late 'sixties. They took exception to the poetasting of most modern art criticism and...

Questioning John Peter Mecca (Open Space) E. A. Whitehead's short, terse, tense play is a miniature study of a misdirected civilisation. If that sounds portentous I can assure...

Lorca, Kemp and Bruce Bryan Robertson The partnership of Lindsay Kemp and Christopher Bruce has produced Cruel Garden, the new ballet which Rambert performed for the first...

La Thatch Richard Ingrams The Government may be worried about the Grunwick dispute but it is probably more worried by the fact that every night on the News viewers are seeing...

Rocking horse Jeffrey Bernard. Various things like a beautiful and wholesome girl, pressure of work and a visitation damn nigh to death's door — in that order— have kept me...

Soviet feud Raymond Keene Both of the current World Championship Candidates' semi-finals are centred around Lac Leman, with Spassky-Portisch in Geneva while Korchnoy and...