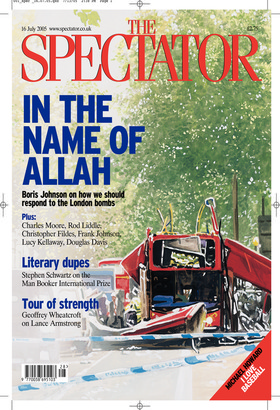 PORTRAIT OF THE WEEK M ore than 50 were killed and

T he bombs in London last week killed people of all races and religions indiscriminately — as of course they were intended to. The terrorists who planted them were not...

W ednesday last week, back when travelling on the Tube was

no big deal, I was on the Central line on my way to White City to appear on a BBC2 lunchtime business programme whose usual select viewing audience was going to be greatly...

M eanwhile, back at the Tory party, they are still looking for a new leader. Thanks to the perceived brilliance of the Prime Minister — he has fed Africa, secured the 2012...

O n the whole, I believe in what politicians like to

call ‘the innate good sense of the British people’, but the reactions of so many friends to last week’s bombings depress me. There is a funny mixture of complacency — ‘We will...

Boris Johnson says it is time to reassert British values in the face of extremist Islam I f we were Israelis, we would by now be doing a standard thing to that white...

It’s all very well to boast that London can take it, says Rod Liddle , but there is no excuse for the patronising evasions of the authorities A ccording to all the newspapers...

Stephen Schwartz on the Albanian writer Ismail Kadare, winner of the first Man Booker International Prize C ultural tourism can be an edgy adventure when promoted by...

A recent cartoon in the Los Angeles Times showed a punkish teenager saying to a more conventional youth, ‘I’m bored. Can I shave your head?’ Ho, ho. But then the paper...

Geoffrey Wheatcroft on the miraculous life of Lance Armstrong, who has just embarked on his last Tour de France Pau, France U ntil 1981 no American even so much as rode in the...

We live in some of the world’s oldest and most expensive homes, says James O’Shaughnessy , and it is time to do something about it W hen President Chirac criticised Britain’s...

All the liberal clichés went off within seconds of one another

T here we Londoners were on that Thursday morning going about our traditional business of being all multicultural and vibrant under Mr Livingstone. Suddenly we were innocent...

Hockey and hanging baskets count as risks, but now we have a real one

R isk assessment is the mantra of our time. You cannot organise a girls’ school hockey match without having to assess the risk that the combatants will bark their knuckles. The...

An operation for fistula and its creative aftermath

M y book Creators was finished some weeks ago and whizzed off to the publishers without my having fixed on any theory of the creative process. But the problem continues to nag...

Findings of the Dismal Science

With not much help from Freud

Among the Siberian gentry

The old-fashioned concert party is back. Henrietta Bredin enjoys the music-making T hrowing open the doors of your home for select musical gatherings seems a splendidly grand...

Master of the horse Andrew Lambirth Stubbs and the Horse National Gallery, until 25 September G eorge Stubbs (1724–1806) is best remembered as the dedicated anatomist of the...

For the people Tanya Harrod Folk Archive: Contemporary Popular Art from the UK The Curve, Barbican Centre, until 24 July and touring W hat is folk art? It is usually defined...

Private patronage Ursula Buchan S ir Edwin Lutyens reckoned that there will never be great architects or architecture without great patrons, and I rather think the same is...

The ultimate movie pro Mark Steyn I happen to be writing this on board ship, in a little café, at a table by the window, with an idle eye on any glamorous women passing by....

After the bombs Michael Vestey W hen I heard of the London explosions last Thursday — I was rung shortly before leaving to catch a train to London, which I had to abandon — my...

Waiting for whiting Simon Courtauld W hiting does not seem to be fashionable these days — perhaps it never was — but in my early 20th-century edition of the Encyclopaedia...

Out of control Taki I was on a fast beam, sailing under high winds and a choppy sea off the north coast of Corsica, when the bombs went off in London. We heard about it when...

SIMON HOGGART S ometimes wine merchants lay in stocks of wine that they know to be terrific, but which don’t sell as well as they might because the public don’t know about...

By Tim Hitchcock L ast night I dreamt I went to Manderley – well, actually things became a blur of delights once my snoring conscience crossed the Tamar but it was Cornwall...

Q. I have a six-week-old baby and have been invited to a lunch party by a neighbour. It was going to be my chance to meet all the other mothers in the street and chat about...

whining about paying £2 or £3 extra at restaurants and a possible ‘challenge of some kind’ from his, perhaps ‘immature’ stepson (who always chooses the most expensive dish on...

Q. What is the correct procedure to be followed when

driving away from a house where one has spent an enjoyable luncheon or perhaps an entire weekend? Name withheld, Somerset A. Occupants of a car should roll down all the windows...