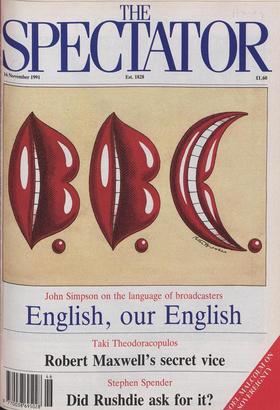 'Give it to me straight, doctor. How long have I got?' L iberal Democrats smashed the pre- vious Tory majority in a by-election in Kincardine and Deeside. Labour won Langbaurgh...

Our leaders wait for a sign of what the led would like them to do next s MON HEFFER 0 ne of the better examples of alterna- tive comedy with which politics has lately provided...

P . D . JAMES t his has been a busy year for me with overseas trips but the most memorable was one with Malcolm Bradbury to Buenos Aires, arranged by the British Council....

Why those on the right side of 50 are worried about Europe CHARLES MOORE I keep on being told, always by people older than myself, that the young are in favour of Europe. It...

THE TROUBLE with viewers and listen- ers is that although they do not watch or listen with much care, they are absolutely certain that they have seen and heard cor- rectly. A...

The Fuji Bank — An apology

In our issue dated 26 October 199.1,. we stated that The Fuji Bank had failed in its duty to preserve savings in its trust and was the laughing stock of the world banking...

Mark Almond explores the link between fascism and zoophilia THE Greens may be languishing in British opinion polls here, but taking up the cause of the environment and...

POWER IS NOT AUTHORITY

Noel Malcolm explains what sovereignty is and why it matters TELL IT it not in Vilnius, publish it not in Ljubljana, whisper it not in the streets of Kuwait City, but the idea...

Digby Anderson wonders why commercial freedom of speech is scorned by civil libertarians PATRONS of the Royal Court Upstairs theatre are hearing passages such as, 'Just relax...

A CORRESPONDENT of the St. James's Gazette of Thursday says that the drinking of salt-water is a perfect cure for seasickness, though it makes the drinker very miserable for a...

HOIST BY HIS • OWN CANARD

Stephen. Spender argues that Salman Rushdie is a victim of the immigration he supports SALMAN RUSHDIE was sentenced to death a thousand days ago, by order of the Ayatollah...

FROM BLEAK HOUSE TO BEDLAM

a woman denied justice for twenty years STANDING on a seat at the side of the hall, the better to peer into the curtained sanctu- ary, is a little mad old woman in a squeezed...

persist. . LAST week, I was consulted by a young man whose hair was done into dyed blond spikes by the application of hair gel. He wore an earring and outlandish clothes which...

A reader received this letter: It is now six months since you bought Your Vauxhall Calibra from us. We trust that the vehicle has exceeded your expectations in every way and is...

On making an exhibition of oneself PAUL JOHNSON A t the end of this month I am going to hold the first exhibition of my paintings, and I have been thinking a lot about the...

THE CITY'S way of selling shares was designed by the City to suit itself. This unworthy suspicion of mine is reinforced by the grumbling now directed towards S. G. Warburg. In...

HAWKER Siddeley is still trying to per- suade the City to reject the £1,500 million bid from BTR. Its efforts appear vain, but the flow of paper continues unstaunched. Wearying,...

IF THERE is one more depressing sight than a Conservative Chancellor who lets public spending rip, it is his fan club telling him how clever his scorched earth policy is. By...

The Maxwell boys take charge but the banks have taken charges CHRISTOPHER FILDES Beneath this stone, in hopes of Zion, Doth lie the landlord of the Lion. His sons keep on the...

• Chase to a view

THE Docklands Light Railway, whose trains have buses running behind them in case they break down, has acquired a new master. He is Sir Peter Levene, who made his name as the...

LETTERS Trust in us

Sir: Charles Clover's article on the National Trust (`Trust, but no confidence', 2 Novem- ber) made a further contribution to the many thousands of words written and spo- ken on...

Sir: John Simpson's even-handed report on the Madrid conference ('Macheath at the peace talks', 9 November) brings to mind the old Arab expectation that one day American...

Man of his word

Sir: Because he encompassed so many self- contradictions — millionaire socialist, obsessively secretive self-publicist and so on — for every bad tale about Robert Maxwell there...

Sir: Roy Fuller said, 'I try my best in poetry to match/Everyday's marvellous and varied prose.' Though I checked the proof myself (Life and Letters, 2 November) I permitted him...

Sir: John Simpson is not fair to Javier Perez de Cuellar (`The old order changeth', 12 October). He makes little or no mention of the extremes of Cold War rhetoric which...

Sir: An Young Man was the title of a book written by Leslie Paul, which was pub- lished in 1951; it related specifically to Political disillusionment but the phrase was used...

Sir: As the compiler of a collection of G.K. Chesterton's

aphorisms, I was interested to see my friend A.N. Wilson quoting him to the effect that people who cease to believe in God believe in anything, not nothing (Books, 2 November)....

Sir: The review of Robin Lane Fox's The Unauthorised Version (Books, 2 November), although purportedly from the pen of the distinguished novelist A.N. Wilson, is actu- ally the...

Head in the cold

I n 1976, Gore Vidal tells us in his preface, he received a telegram congratu- lating him on his election to the Institute of Art and Letters. He telegraphed back that he could...

A perfect gentleman and a bit of a rake

Kate Fleming THE POWER OF CHANCE by Rupert Hart-Davis Sinclair-Stevenson, £15.95, pp.188 T o those familiar with the six volumes of the Lyttelton/Hart-Davis letters, the fact...

Time present and time past

Clive Sinclair HIDDEN IN THE HEART by Dan Jacobson Bloomsbury, £12.99, pp.199 H idden in the Heart tells the familiar story of two men and a woman. Rodney Foxborough is a...

Reticent • to .a fault

Anne Chisholm MARKING TIME by Elizabeth Jane Howard Macmillan, £15.99, pp. 452 I n The Light Years, the first volume of her projected Cazalet Chronicle, a trilogy about an...

Just a few quick ones before I go

A tale told by an idiot, signifying nothing

Peter Levi WILLIAM SHAKESPEARE: A LIFE by Garry O'Connor Hodder dt Stoughton, £19.95, pp.337 h is writer has been a director of the Royal Shakespeare Company, has written...

Richard Ingrams THE SPECTATOR ANNUAL edited by Fiona Glass Harper Collins, £16.99, pp.246 F ew editors can have had such a sensational debut as young Dominic Lawson when he...

SPECT THE AT OR

SPECIAL OFFER "Why have we had to wait 20 years for this book? Like the glorio us , festering piles of stone he draws, John Glashan is a great national monument that should be...

Chasing his own tale

David Montrose THE LAST VOYAGE OF SOMEBODY THE SAILOR by John Barth Hodder & Stoughton, £15.99, pp. 573 A mong far too many other thing, John Barth's last (very fat) novel, The...

Rude sketches worked up for the public

Size is Not the Soul

Size is not the soul nor is the neutron small when eyes go beyond the gazing and gazer beyond his cell Dust is more than matter The quantum does not wither fused in a leaf or a...

Not just a domestic prop for a genius

A pumping arm, a monumental spade, A giant sexton and a sexton's lad, Black in the lemon shafts the lantern's made Thrown on the foggy night. .. The copper and The man from the...

A wronged man • need not be a good man

Paul Foot SMEAR! WILSON AND THE SECRET STATE by Stephen Dorril and Robin Ramsay Fourth Estate, £20, pp.390 A nyone who wants to know how the British secret service works owes a...

It's the rich wot gets the blame

Jonathan Clark THE LONDON HANGED: CRIME AND SOCIETY IN THE EIGHTEENTH CENTURY by Peter Linebaugh Allen Lane, £25, pp. 484 S ince the mid 1970s, we have lived in 'a historical...

John Whitworth S ome don once compiled a full football league of living British poets, for Poetry Review I think it was. I also think Seamus Heaney was Arsenal, as it were, and...

Take warning by her fall

J. Enoch Powell A CONSERVATIVE COUP: THE FALL OF MARGARET THATCHER by Alan Watkins Duckworth, £14.90, pp. 229 I h e revolution of 1990, which ejected Margaret Thatcher from...

'Can I take my toys to heaven?' Out of the mouths of babes. 'We'll see.' 'Does God have any friends — like Paul and Graham?' What has been happening at that nursery school?...

ow sad it is that the season of good H Will should be prefaced by an annual occa- sion which makes good will hard to justify. Before our seasonal binge in the art world comes...

Social climbing Ursula Buchan I t may not have been the most commer - cial enterprise ever to be undertaken by Messrs Jardine and Matheson, East India merchants, nor even...

Kafka in Love (King's Head) Kafka on the couch Christopher Edwards T his play by the American Hal Lieber- man, directed by Ron Moody, is about the last years of Franz Kafka's...

Maxwell's secret vice Taki D espite the mammoth press coverage since his mysterious death, not a single item has appeared about Robert Maxwell's gambling addiction. This is...

Tea lives Martyn Harris hat would the world do without tea?' asked the Reverend Sydney Smith in 1810. 'How did it exist?' The answer of course was that it drank beer (three...

The gap in our lives Zenga Longmore P iccadilly Circus is a very important tube station in the life of my two-year-old daughter. As if by magic Omalara can tell when we are...

Barbados bound Jeffrey Bernard O n Monday I make my fourth trip to Barbados and this morning I have been reminiscing about the last three. The first time I went there was with...

ONCE, when the Thames served much the same function as the M4 does today, Lon- doners were proud of their river. We built our best houses alongside it and those who couldn't...

A s I predicted before the start of their match, the 21-year-old Chinese girl Xie Jun has seized the women's world cham- pionship from the Georgian Maya Chibur- danidze, who has...

12 YEAR OLD SCOTCH WHISKY COMPETITION Dirty dozen J asp istos I . a Competition No. 1702 you were in- vited to incorporate twelve given words, in any order, into a plausible...

The first Spectator Competition was set iii January 1950 by Peter Fleming, The third, set by Hilary Brett-Smith, offered £ 5 ('which may be divided') for nine lines to complete...

ONE OF the reasons Sussex County Crick- et . Club has apparently scrapped its annual dinner is 'the cost involved in obtaining good speakers'. Reporting this in the Daily...

Q. I am an antique dealer dealing with what we call in the trade important furniture. My Problem is that my social life is not my own. Whenever I go into anyone's house for...