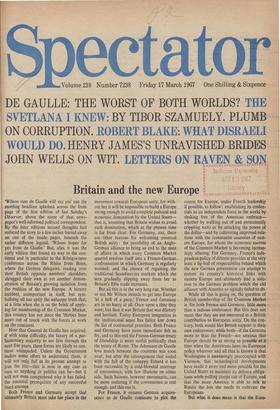 `Wilson sure de Gaulle will say yes' ran the startling headline splashed across the front page of the first edition of last Sunday's Observer, above the name of that news-...

The ghost of Panmunjom

First the bombing of the Thainguyen steel works, then the heaviest series of air raids on North Vietnam for the past four months: the Americans this week have once again stepped...

most: PERFIDIOUS French very nearly said 'Non' to the General after all: Sunday's second round of voting left the Gaullists with only a wisp of a majority, Foreign Minister...

The other Mr Wilson

POLITICAL COMMENTARY ALAN WATKINS Just over five months ago, at a dinner given to commemorate the birthâor perhaps it was the deathâof Ramsay MacDonald, Mr Harold Wilson...

CHRISTOPHER HOLLIS I Six little pigs joined the Market. One little pig stayed at home, Requiring more time to consider The text of the Treaty of Rome. II If governments have...

The worst of both worlds?

ADEN PHILIP GOODHART, MP Visitors to the offices of the British high com- mission at Al Ittihad, the headquarters of the South Arabian Federation, still have to edge past...

SVETLANA TIBOR SZAMUELY Under a dictatorship nobody can be really happy: the beneficiaries of tyranny are caught in the same inexorable grip as its victims. This essential...

What Disraeli would do

OPPOSITION ROBERT BLAKE Disraeli is regarded as the most potent figure in the traditional folklore of the Tory party âand rightly so, if sometimes for the wrong reasons. Yet,...

J. W. M. THOMPSON So far the Americans have come out of the Svetlana Stalina episode extraordinarily badly. Stalin's daughter obviously can throw a unique light on Soviet...

THE PRESS DONALD McLACHLAN Of all the features in a serious newspaper the diary is the one most likely to cause trouble and bring in the lawyers. Everyone secretly wants to get...

TELEVISION STUART HOOD Scotland is in no sense an easy country to pro- vide with an acceptable television service. The bulk of the population is concentrated in a narrow strip...

From the 'Spectator,' 16 March 1867âThe New Englanders seem to be in a panic about the Canadian Federation, which they call a breach of the Monroe doctrine, as it will tend to...

PHILIDOR Specially contributed by Richard Hancock (Iver, Buckinghamshire). Black to play and help White to mate him in two moves; solution next week. Solution to no. 325...

MEDICINE JOHN ROWAN WILSON Most men have some secret demon inside them which they find themselves condemned to fight throughout the years of their adult lifeâlust, envy,...

PERSONAL COLUMN J. H. PLUMB William Ewart Gladstone, the Victorian states- man, was occasionally forced to reply to a personal letter when he was sitting at his desk in the...

C. B. COX Henry James's treatment of sex has tantalised and mystified his commentators. When his young heroines, with their extraordinary inno- cence and purity, associate with...

NEVILLE BRAY BROOKE This book is concerned with the open mind, the life of the spirit, and the intimations of mortality that can be interpreted from daily, or even hourly,...

Race, Community and Conflict: A Study of Sparkbrook by John

Rex and Robert Moore (Institute of Race Relations/OUP 50s) Prejudice is real DONALD G. MACRAE Our sociological knowledge about our society is based on a paradox. Money and...

Of the plain way

JOHN HOLLOWAY I believe the farmers hate My flower-laden paddock. Three years I Wrenched at the hay with the rotary Roaring, stinking, stalling on the hummocks: Now, I have...

RONALD HINGLEY The complete story of Russian terrorism is one of the most fascinating never told . . . never told, that is, in its full span from Karakazov's unsuccessful...

Unscrambling an Empire: A Critique of British Colonial Policy 1956-66

by W. P. Kirkman (Chatto and Windus 35s) Decline and fall DOUGLAS BROWN The essential truth about decolonising is that the retreating imperialism has no choice of heirs....

NEW NOVELS A question of guilt DAVID GALLOWAY Very Like a Whale by Ferdinand Mount (Weidenfeld and Nicolson 25s) ) Waiting for Winter by John O'Hara (Hodder and Stoughton...

MAURICE PRIOR This month's batch of crime novels is pretty diverse and rather more deductive-slanted than usual. A fine example of an oblique murder mystery is Lonely Heart...

HENRY TUBE Time in Ivy Compton-Burnett's novels is not the healer, but the revealer. If there is one thing a character can be certain of as he enters her stately pages it is...

THEATRE Poet bites poet HILARY SPURLING With the theatre in its present fuddled state, drifting between a frowsy naturalism and the even drabber, complacent, narrow-minded...

ART ROY STRONG It must be deliberate planning on the part of the Courtauld Institute to have an entrance to their galleries so stealthily concealed. The sur- prise of finding...

Market notes The long three-week account on the Stock Exchange opened firmly and was helped by the favourable trade returns, the 'gap' being cut in February to Â£3 million. It...

The importance of Mr Lever MONEY

NICHOLAS DAVENPORT It was good to read this headline in a Sunday paper: 'Lever: High Pay and Profits Vital.' The speech to which this referred was made by a new junior member...

CONSUMING INTEREST LESLIE ADRIAN The decibels of the decimal dialogue have crashed over my tolerance threshold. What with the Government pounding away, the Con- federation of...

JOHN BULL Some of the more spectacular casualties of the setback in the economy have been the big con- struction groups. John Laing has stopped mak- ing profits for the time...

Sir: I would like to congratulate Simon Raven on an

admirable piece of paternal advice, which his son will undoubtedly appreciate before he is much older; I know I have done myself ever since my father spoke to me in such a...

Sir: Although a regular subscriber to the SPEC- TATOR I

have little idea of the ages of your contri- butors. I had always thought of Mr Simon Raven as a man in his early twenties making his living by Perpetrating odd and immature...

Rowan Wilson (10 March) says that most ordinary people feel 'that the intellectual leaders of our society have with great brilliance and ingenuity destroyed most of the moral...

Sir: John Rowan Wilson's book review last week contained wise reflections on current trends in journalism, television, the cinema and the theatre, such as I have longed to see...

Sir: In 'Personal Column' (3 March) Anthony Bor- ges, presents an admirably argued point of view. His proposition that the real function of education is to show us how to read...

Sir: I am a Free Church minister, entertaining perhaps some

of the 'poisonous enthusiasms' from which Simon Raven believes the Church of England to be free: it is 'a quiet and decent superstition.' Anglicans do not need me to come to...

Sir: Have you the courage to print a letter from

a mother to her daughter, whose virginity she wishes her to retain, as against such a man as Simon Raven exhorts his son to be. And have you also the courage to record the...

Sir: I think I must be one of many readers

of the SPECTATOR over a long period who are surprised and distressed that you should have printed the article by Simon Raven in your issue of 10 March. I pass over his cheap...

In for a month

Sir: Mr Giles Playfair writes (10 March) that 'in the sense that thousands of men are sleeping three to a cell originally built for one, imprisonment in 1967 is a less civilised...

10 March) was not mine but the printer's. Anthony Burgess 24 Glebe Street, Chiswick, London W4

Sir: In the absence of my chairman, now in Italy,

may I express very humble appreciation of the excellent and authoritative article by Mr Joseph Macleod (24 February)? The Italian government, the great national and...

Mr Wilson and his dogs

Sir: I should like to express my deep appreciation of Joseph Macleod's article 'Florence glints le deluge in your issue of 24 February. It is entirely accurate, both with regard...

Sir : Mrs Spurling is entitled to dislike Shaw as much as she pleases but when she is the critic of such a reputable periodical as the SPECTATOR she should know better than to...

Sir: Your article The Barnsbury scandal' will have been read

with sympathy and understanding by many residents in Islington. The need for an Ombudsman is likely to be felt in other parts of the borough in the near future. Last May the...

Sir: I have been supplied with a copy of the letter signed by Mr Christopher Higgins, chairman of the Greater London Council planning and communications committee, and dated 6...

Sir: With apologies for harping on dogs, may I remark

on an unsuspected link between Harold Wilson and the Virgin Queen, who might usually be supposed to have absolutely nothing in common? Was it not the first Elizabeth who said,...

JOHN WELLS 'Life is just one damned thing after another.' âElbert Hubbard (1859-1915). With ruffles beginning to blossom once again from the breasts of our dandies, and rich...