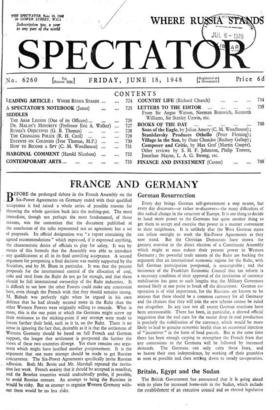 B EFORE the prolonged debate in the French Assembly on the Six-Power Agreements on Germany ended with their qualified acceptance it had raised a whole series of possible reasons...

Every day brings German self-government a step nearer, but every day discovers—or rather re-discovers—the many difficulties of this radical change in the structure of Europe. It...

Britain, Egypt and the Sudan

The British Government has announced that it Is going ahead with its plans for increased home-rule in the Sudan, which include the establishment of an executive council and an...

Storm Clouds Over the Deccan

The discussions now in progress in Delhi on the future of Hyderabad are of grave moment for the whole of Southern India. Sir Walter Monckton, the Nizam's constitutional adviser,...

There is always a strong element of violence and irresponsibility in Burmese politics. But those who had feared that these elements would become dominant when Burma, on...

The Road to Rhodes

As the Palestine truce enters its second week Count Bernadotte is busying himself with the second, and much the hardest, part of his mission, which is to find, if possible, the...

The final attempt to save university representation on the report stage of the Representation of the People Bill in the House of Commons on Monday amounted to little, not...

The proposition that an adequate supply of food is a major part of the foundation of human happiness and political stability is normally accepted passively and even with...

( Two suggestions of reform, of varying importance, were made in the House of Lords Committee on the Criminal Justice Bill on Tuesday. Lord Llewellin's suggestion that pregnant...

T HOUGH it cannot be truthfully said that this week has seen the restoration of normal House of Commons hours, it has at least seen some tendency to abandon the recent...

WHERE RUSSIA STANDS T HERE was no visible reason in external,

though there may have been in internal, politics why Mr. Truman should have devoted his speech at Berkeley, California, last Saturday to a particularly acrid attack on the...

Lord Addison and Lord Samuel— who demonstrate conspicuously the fallacy of judging mental and physical powers by calendar years the outstanding example is General Smuts, whose...

Fawcett, in spite of his disability, was a great skater, and his small daughter, as a child of nine, guided him about the ice by whistling. The child was later placed above the...

The Parliamentary Secretary to the Ministry of Food is as

skilful a politician as anyone in the Commons, but even she failed to make anything like a good case out of the shockingly bad case of the grant of a licence for a retail shop...

On Wednesday of this week the Bristol Evening Post Ltd.

announced a dividend for the last year of 20 per cent. tax free, no ordinary achievement for an independent (or any other) evening paper. The remarkable and rather romantic...

Bishops are unaccountable. I must be allowed to go as

far at least as that, in the light of an observation attributed by the Daily Mail to Dr. Walter Carey, Bishop of Bloemfontein 1921-1933. " I am afraid of the Olympic Games," he...

Friday morning might have been peaceful, but not at all

; the General was off for a tour round the laboratories—engineering, physics, low temperature, on all of which he had discerning comments to make ; then a lunch at John's—but...

By ONE OF ITS OFFICERS R ECENT events in Palestine have focused attention on the Arab Legion, the Army of Transjordan, and on the British officers, numbering thirty-seven, who...

By PROFESSOR ERIC A. WALKER T HOUGH the Union of South Africa has a parliamentary con- stitution, she is not a democracy, since effective political power lies with the white...

By G. B. THOMAS D ANGEROUS as it is to speculate about the twists and turns of Soviet foreign policy, I would nevertheless hazard the guess that the Kremlin has decided upon a...

nowadays," an elderly suburban householder told me recenti,y. ,, " These wireless motor cars and things—no doubt they're all very well, but it seems to me they don't come into...

By IVOR THOMAS, M.P. NTERNATIONAL conferences are, by a bad convention, never I admitted to have been a failure ; and when an international con- ference is described as an...

HOW TO BECOME A SPY

By C. M. WOODHOUSE G OOD spies are hard to find. Indeed, the best ones are never found at all. I have often wondered how a really good spy is found even by his own side. In a...

By HAROLD NICOLSON I T would be a sad thing if our young men, in the standardised age which seems to threaten, were to suppose that it will no longer be possible for them to...

" L'Homme au Chapeau Rond." (Academy.)—" The Unfinished Dance." (Empire.)—" Uneasy Terms." (Warner.) I HAVE had the opportunity of seeing the first Chinese feature film to be...

THE THEATRE . g , The Lady Asks for Help." By James Parish. (Garrick.) THERE is, and even since I can remember there has been, a class of dramatist in this country who is in...

" NOTHING is wrong that sounds right." That was a very naive remark for such an accomplished critic as Schumann, who must have known that what sounds right differs from...

IT has been clear since the first studies for the Northampton Cruci- fixion that Graham Sutherland's style is changing. His new exhibition—which marks the opening of the new...

More Country Sounds Sitting amid that debris during a lull

in the storms, I was enjoying 4 the Sunday morning silence, and the little sounds that emphasised it. First, the bell-music at eleven o'clock from the village three miles away ;...

THE copses of sweet chestnut have been rigorously barbered this year and now the woodmen are busy making spiles and poles. It is a lonely trade, usually carried on by one man in...

Neurosis in Trees The falling of the wind, after two

weeks of clumsy and violent raging, has set me wondering about the sensibility of trees. We hear of dogs in America being treated by psycho-analysts ; so why not trees? I should...

Seasonal processes are much in advance this year. The July trimming of the yews is already in hand. The lavish growth may be due to a good mulching with compost in the early...

Sta,—Mr. Harold Laski is more than capable of replying to your remarks in A Spectator's Notebook about his " divided loyalties " ; but will you allow another British Jew who is...

THE EDITOR PROPHECY AND REALITY Sm,—Last week we were treated to a flocid of oratory from three distin- guished party leaders—Mr. Winston Churchill, Viscount Addison and Mr....

THE FUTURE STATUS OF LIBYA

Snt,—In his excellent survey, Libyan Outlook, Robin Maugham makes a plea for a united Libya under the sovereignty of the Emir Sayyed Idris es Senussi, with local autonomy in...

SIR, —Mr. Hynd's defence of the groundnuts fiasco may convince readers in England that all is well. From Africa we view things differently. 1. Plenty of his " primitive "...

Sut,—The source of the statement on which Mr. John Hynd

desires "illumination," that "a further £8 million has already to be voted" for the African groundnut scheme, is The Times, in its report of the Food Minister's first account to...

Sta,—Before August, 1914, is was possible to post a letter in London in the morning to other parts of London and to receive a reply by post the same evening. We were justly...

Sta,—Your correspondent, Col. Minshall, asks me to explain the statement appearing in Report to the Nation No. 17, that: " Output per manshift is lower than pre-war though there...

Sta,—Janus's remarks on the Central Office of Information's publication Harvest Home roused my indignaticn. I cordially agree with all he says, but I have another grievance. If...

Sta,—My copy of this week's Spectator has only just reached me, and with it Sir Osbert Sitwell's latest acrimonious lecture. Ignoring the other egotistic trivialities, I confess...

75 minutes. According to Mr. Neville Cardus, in his Autobiography, Jessop made 104 in 65 minutes , the last 54 of them in ten minutes. I imagine they are referring to the same...

SIR,—Mr. Skinner's letter calls attention, although with insufficient vigour, to the shortage of blood for transfusion. And, although he seems to think that exhortation by...

Sm,—Happily for the tortured rabbits there are many who do not agree with Sir Edward Pease that they must be killed by cruel means. To rely on all traps being visited night and...

A Moor for Moscow

Stanislaysky Produces Othello, (Geoffrey Bles. 21s.) IN 1929 or 1930 (the Editor's Note is discrepant on this point) Stanislaysky went to Nice to convalesce after a serious...

Albanian Guerrilla Sons of the Eagle. By Julian Amery. (Macmillan. 21s.) IT is no good trying to conceal my bias about this book. The war took me for some time along the same...

Composer and Critic. By Max Graf. (Chapman & Hall. 16s.) IN the first chapter of this book the author presents his credentials, and tells us that he was music critic in Vienna...

Village in the Sun. By Dane Chandos. (Michael Joseph. 10s. 6d.) ELEVEN years ago, I found two young Englishmen living at Ajijic on the shores of Lake Chapala in Mexico. One of...

What the Soldier Said

The Other Side of the Hill, By B. H. Liddell Hart. (CasselL lOs. 6d.) AFTER the end of the war in 1945, Captain Liddell Hart had the good fortune to have a long series of...

Constable and His Work

John Constable, His Life and Work. By Sydney J. Key. (British Painters Series : Phoenix House. 15s.) THE present volume is the second in a new series devoted to British...

PROFESSOR BRUFORD eplains his purpose in the introduction: to show, through Cheldicar's eyes, the Russia which Chekhov knew. " How far is this permissible ? " he asks, and...

The Sisters. By Anne Meredith. (Faber and Faber. 9s. 6d.) MARRIAGE is not the main theme of Mr. Swinnerton's novel, but an important part of it. Mr. Aiken and M. Maurois give...

SOLUTION TO CROSSWORD No. 480 SOLUTION ON JULY

Shorter Notices IN one sense this book might be called

the memoir of a quiet spirit, for though it was a spirit which drove him into perpetual activity for this or that good cause, Buxton possessed, before as well as after his...

By CUSTOS THERE is nothing in the investment prospect, as I see it, to call for any revision of the cautious attitude adopted in these notes for some weeks past. While the...

9s. 6d.) This is an extraordinarily well-written and amusing book. It is no ordinary guide to Cornwall. It has a personal approach, but gives in the compass of forty-seven...