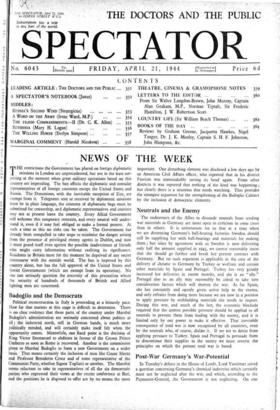 T HE restrictions the Government has placed on foreign diplomatic missions in London are unprecedented, but not in the least sur- prising at the moment when great military...

Neutrals and the Enemy

The endeavours of the Allies to dissuade neutrals from sending war materials to Germany are more open to criticism in some cases than in others. It is unfortunate for us that at...

In Tuesday's debate in the House of Lords, Lord Vansittart raised a question concerning Germany's chemical industries which certainly must not be neglected after the war, and...

Badoglio and the Democrats

Political reconstruction in Italy is proceeding at a leisurely pace. How far that matters at this stage is difficult to determine. There is no clear'evidence that those parts of...

The new Defence Regulation IAA empowers the Government to take drastic measures against agitators who incite workers to strike in essential industries. This is the Government's...

The appearance on Tuesday of a White Paper on a National Water Policy synchronises with a water shortage in many parts of England which already threatens to become acute. The...

Mr. Calwell, Australian Minister of Information, has made Press censorship controversial to a degree for which no other British Dominion provides a parallel. When the President...

The fact that Hull has reached the stage when it seeks Parlia- mentary powers for rebuilding and reorganising the city shows how essential it is that the Government's national...

THE DOCTORS AND THE PUBLIC

DD ISCUSSING the proposed National Health Service at Birmingham last Friday the Minister of Health endeavoured to reassure the doctors and the voluntary hospitals. It was not to...

T HOUGH it is rightly to be marked by no special celebrations, Princess Elizabeth's eighteenth birthday is an event of note. Till this week the death of the King would have...

By STRATEGICUS T HE campaign in the Crimea has inevitably captured the imagination. It began apparently on April 7th, and in less than ten days the Russians had not only broken...

A WORD ON THE ARMY

By IRENE 1VARD, M.P. There is a considerable public opinion in this country today which believes that it is a profound mistake to initiate post-war legislation at this stage of...

By CARLETON KEMP ALLEN (1) Certain forms of delegation give the Executive practically carte blanche. There is the "Henry VIII clause" for "removing difficulties " for a limited...

By MARY H. LOGAN Discouraged by the lack of hotels and headed off by the scarcity of roads and their primitive condition, however, few travellers penetrated so far east, and in...

By EVELYN SIMPSON M RS. TREWENNA is in the middle forties. She lives in a neat little house on the outskirts of the city, and, as she says herself, she has always been " the...

I WATCH a kestrel in the sky Hover above the field and think How to that concentrated eye ,The teeming world entire must shrink Into a single mouse until He stoops to kill....

By HAROLD NICOLSON O NE is reluctant in time of war to criticise the policy of one's own Government. This reluctance arises from several motives, none of which is necessarily...

THE CINEMA " Le Jour Se Leve." At Studio One.

" On Approval." Generally released April 22.—" The Halfway House." At the Regal. Jusr as a good novel encourages us to look at everyday life with the excitement of keener...

AMONG the March and April new recordings the most important is a recording of Sibelius's Symphony No. 7 in C Major, Op. toy, played by the St. Louis Symphony Orchestra under V....

BERNARD SHAW'S " topical comedy " (as he himself described

it in 1893) has been called "a minor play " but like some other works labelled as "minor "—Johann Strauss's operetta Die Fledermaus, for instance—it has - more vitality and will...

Sia,—As there seems to be a good deal of misunderstanding amongst the laity about the attitude of doctors towards the White Paper, may I as a general practitioner be allowed to...

S1R,—Constance Reaveley in her " Machine and the Mind " wonders whether others have had similar experiences to her own. I do not pretend to aspire to the Mind of a Don, but when...

LETTERS TO THE EDITOR Sut,—Mr. Elliott Dodds' exposition of the attitude of the three great parties towards planning was interesting: one wonders if any of the three have found...

SIR,—Mr. Young apparently fails to appreciate that my article was on the dullness of town councils. It was not intended to deal with their sur- vival, which while highly...

THE PRIME MINISTER SIR, —May I—one of very many, I am

sure—thank you for your defence of the Prime Minister? The country is in a dilemma. It has as little regard for, the membership of the present House of Commons as it ever had...

MR. NICOLSON AND THE POLES Stu,-It is a pity that

the literary facility of Mr. Harold Nicolson, my House of Commons colleague, should lead him in his Marginal Comment of April 14th into unfairness both to the Poles and to...

Sta,—" Janus " appears to ignore the different conditions under

which the whole-time researcher and the general practitioner work ; the former chooses his own hours and his own ways ; the latter is at the beck and call of others. Let a...

To those who hold that the salvation of England, in regard to its land, will come from a return to some sort of local self-sufficiency, it w 1, pleasing to know the history of...

FLATS ON THE VILLAGE GREEN

Sta,—With reference to that " shock almost of horror " that the excellent " W. B. T." received when he " read (in the Countryman of all papers) the suggestion that flats in...

THE DISCOVERER OF INSULIN

Sett,—It would be interesting to learn the authority upon which " Janus " made the statement in your issue of April 14th that " Sir Frederick Banting's discovery of insulin was...

The Battle for Britain in the Fifth Century. By Trelawney Dayrell Reed. (Methuen. Jos. 6d.) MR. DAYRELL REED says that he appreciates the timidity of angels. He has never been...

G. K. Chesterton Gilbert Keith Chesterton. By Maisie Ward. (Sliced and Ward. 255.) IT is possible to argue that the best biographies have been the result of a conflict and not...

Cardinal Hinsley.. A Memoir by John C. Heenan, an. (Burns, Oates and Washbourne. 8s. 6d.) BETWEEN 1935, when he was enthroned as Archbishop of West- minster, and March of last...

The Odyssey of a Cameraman

Desert Journey. By George Rodger. (The Cresset Press. I58.) MR. RODGER is a photographer and in this book he tells the story of a journey he undertook for Life, beginning with...

The English Book of Light Verse. Chosen by Guy Boas. (Macmillan 7s. 6d.) THERE is much humorous verse in here that the reader will he glad to find in one volume—Shakepeare's...

SOLUTION TO CROSSWORD No. 265 SOLUTION The winner of Crossword

IA Book Token for one guinea will be awarded to the sender of the first correct salaam of this week's crossword to be opened after noon on Tuesday week, Mal 2nd. Envelopes...

Affairs. 2S. 6d.) WHATEVER the precise form and composition of the international organisation to be created or revived after the war, its efficiency, and indeed its very...

By CUS'FOS WITH less than a week remaining before Sir John Anderson pre- sents his Budget, markets are throwing more of the customary shadows. The truth is that the City is not...

THIS is an unusual and attractive anthology very judiciously com-

piled and not too full of matter. It is a book for a lover and savourer of words, for all the extracts, whether from Bacon, James Joyce, the Book of Job, Robert Burton or Sir...