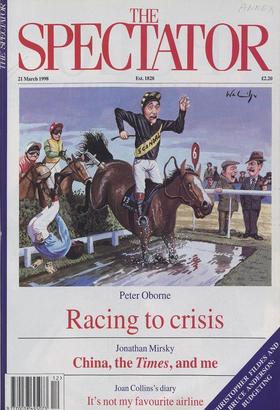 I n his budget, Mr Gordon Brown, the Chancellor of the Exchequer, did not per- secute the middle classes as much as they had feared. Existing tax-exempt special sav- ings...

Gordon Brown could find that he has budgeted for a downturn BRUCE ANDERSON I n one respect, it was a successful budget, for it enabled Gordon Brown's spin doctors to recover...

JOAN COLLINS E very time I fly British Airways I can- vass the opinion of some of my fellow pas- sengers and the cabin staff on the new graf- fiti-encrusted tail-fin designs....

The other letters behind that very long letter from Harold Evans FRANK JOHNSON T he Times is generally agreed to have come badly out of the Murdoch-Patten- China affair...

Cheltenham this week will represent all that is best about the Turf; says Peter Oborne, but much else about it has gone wrong THE Countryside March reassembled this week,...

Mark Steyn says the President has undergone an operation rendering him no longer a danger to society New Hampshire EVERY DOG has his day. And for Buddy the First Pooch it's...

That, says Christopher Fildes, would be the simplest tax reform, and the last and the best MR DEPUTY Speaker: It's a nice after- noon, the economy is bowling along, the taxes...

`WHY don't you do roid rage?' asked my husband, 'Or fanny pack? — that's amusing.' `Don't be silly,' I replied patiently. Put that down and get on with your paper on irritable...

A BETTER ISM FOR OUR TIME

A.N. Wilson advocates something more suited to us than socialism, conservatism or libertarianism (certainly not Blairism) IN an elegant essay recently, Matthew Par- ris...

NOT EMBARRASSING PETER (OR RUPERT)

Jonathan Mirsky on writing for, and resigning from, the Times on the subject of China IT IS rare in the career of a journalist of retirement age to find his editor attacking...

Gift Subscription Offer Give a gift subscription to The Spectator and we will send you a bottle of magnificent Laphroaig 10 year old single Islay malt whisky. Laphroaig is...

ARMS AND THE ETHICS MAN

Mr Cook may think his is an ethical foreign policy, says Edward Heathcoat Amory, but the rest of the government busily sells weapons IT IS HARD to imagine Tony Blair in khaki...

ON BEING A CHILD OF UNLUCKY JIM

Richard Kelly salutes the prime minister who encouraged his youthful lack of idealism IN POSTWAR Britain, three generations look as if they will leave their mark. The first...

TWO VERY SPECIAL TOURS EXCLUSIVELY FOR READERS OF THE SPECTATOR

SPECTATOR READERS ARE INVITED BY CULTURAL TRAVEL SPECIALISTS TRAVEL FOR THE ARTS, TO SELECT A HOLIDAY AT TWO OF ITALY'S MOST FAMOUS MUSIC FESTIVALS FROM THE LIGURIAN TO THE...

Douglas Johnson on how almost all forecasts about Sunday's elections were proved wrong Paris SUNDAY'S regional elections concerned only the 22 regions of metropolitan France...

The dolls, the Zipper, and Adam Smith's Invisible Hand PAUL JOHNSON Last week, he was entertaining a small Oriental president, putting him on a chair so that his feet did not...

Sir: Your 7 March leader about the Coun- tryside March, 'No to Nostalgia', was enter- taining even if its point was wrong. The Conservative party is out of power, debt- ridden,...

Sir: In your issue of 28 February an article entitled 'Is our PR good enough?' stated that it was rumoured that the Duke of Beaufort dislikes fox-hunting. This surprised me...

Sir: The tirade from Harold Evans reminds me of the

description of an eminent Victo- rian politician as 'a sophistical rhetorician intoxicated by the exuberance of his own verbosity'. Should he write again, may I suggest that he...

Sir: Your issue of 14 March contained two articles which struck me as singularly repugnant. In an open society people like the late Piero Manzoni (Arts) should be free to pre-...

Credit where it's due

Sir: Why was James Delingpole's otherwise highly favourable review of Our Mutual Friend (Arts, 14 March) so grudging in its conclusion? If 'morons and philistines' real- ly were...

Sir: I sometimes grow a little weary over the continuing love affair of your 'Media studies' correspondent, Stephen Glover, with the Daily Mail. Certainly, it is a commercial...

The Boyne Sir: Your persuasive leading article on Kosovo and

the Balkans (14 March) was besmirched by an error of fact. The river Boyne runs to the south of County Louth and is thus some way from Ulster, and I do not think even Dr Paisley...

Sir: I was delighted to see that Harry Evans decided to drop his threat to sue The Spec- tator and accept its offer to print his letter (14 March) instead — even if it was...

Sir: I have given up waiting for someone else to respond to the fatuous letter about Mark Steyn (Letters, 21 February). For acuity, wit and sheer keyboard wizardry, there can be...

Toby Young, wrote an arti- cle about Harold Evans, erstwhile Sunday Times editor and now US publisher. Few of your readers, I imagine, can remember its contents. Not so Mr Evans...

Carole Angier HESHEL'S KINGDOM by Dan Jacobson Hamish Hamilton, f15.99, pp. 242 ve wanted to read Dan Jacobson for a I long time, and I shall certainly go on read- ing him...

A. D. Nuttall THE LIFE OF THOMAS MORE by Peter Ackroyd Chatto, £20, pp. 436 E rasmus belonged to no country; More was always a Londoner and an Englishman.' Peter Ackroyd's...

Tony Gould LIT ED by Anthony Curtis Carcanet, £25, pp. 374 I was literary editor or, as we called it, books editor on, first, New Society and then the amalgamated New Statesman...

Of rats and men

Andro Linklater THE SOCIAL ANIMAL by W. G. Runciman HarperCollins, £14.99, pp. 230 even years ago, Lord Runciman was awarded the ultimate accolade of Great- ness and Goodness,...

Not a very jolly lot

Where are the Snows of yesteryear . D uring the Civil

War the minor reli- gious poet George Wither, fighting for Cromwell, had the misfortune to be taken prisoner by Royalist troopers. One of their officers was Sir John Denham,...

What price truth, goodness and beauty?

David S. Oderberg BEYOND EVOLUTION by Anthony O'Hear Clarendon Press, £19.99, pp. 220 R ecent years have seen a spate of books critical of the theory of evolution. One thinks...

Ending up with the wrong cheese

A doubtful head for heights

William Scammell A GIFT IMPRISONED by Ian Hamilton Bloomsbury, £17.99, pp. 242 AM/ W ho was the 'much-pondered Marguerite', subject of Arnold's early love poems? How did Matt...

Crime and punishment Nit-picking often stems from loathing, not from a passion for accuracy, warns Michael Tanner T here used to be a game of conjugating `irregular' verbs...

Italy in the Age of Turner (Dulwich Picture Gallery, till 24 May) Italian idyll Martin Gayford G . South, young man! For centuries, that was the standard advice for any...

Andrew Lambirth explores a new permanent collection of 20th-century Italian art T he opening of a new museum is a wel- come but all-too-rare event in the art world's calendar....

Mefistofele (Royal Opera, The Barbican) La Boheme (English National Opera) Haitink the hero Michael Tanner I don't think I have ever met anyone who was especially keen on...

Test-tube bores Michael Vestey I groaned when I awoke on Monday morning to hear on the radio that it was Science, Engineering and Technology Week. Haven't we had enough of...

Going native Ursula Buchan L ike most other people, I marched in London on 1 March to lend my support to field sports. Why? Because they play an important role in the...

War zones Simon Hoggart I guess the best you can hope for is to be attacked by both sides,' says Norma Percy, who has been producing a six-part series on the Arab-Israeli...

Fair to fine? Robin Oakley I t was what you might call an unconven- tional preparation for Cheltenham. Two days in John Prescott's Hull, peering into the murky waters of local...

Lords, ladies and phonies Taki T Gstaad here might be fear and loathing in the White House, but here, in this sunny and beautiful alpine village, things are just as bad. The...

1997 it was stated that some 40 years ago the former boxer Victor 1 - lerman had physically assaulted a woman in a London café. We are very happy to accept Mr Herman's assurance...

Great Danes Andrew Robson THE standard of bridge in Scandinavia is probably the highest in the world. Norway, Sweden and Denmark have all reached the semi-finals of the World...

A sense of place Leanda de Lisle I'm not at all sure I've made a good impression on India as it is. Some of you may remember that I went to Rajasthan on holiday last year. I...

DISTINCT POSSIBILITIES Le Caprice and the Savoy This is the first of a new feature in which vari- ous writers discuss that phenomenon of the 1990s — restaurants which are as...

Cueing smoothly Jaspistos IN COMPETITION NO. 2025 you were invited to incorporate a dozen given words or phrases (all beginning with q) into an entertaining piece of prose. I...

Sinking feeling (2) Raymond Keene LAST week I covered Cambridge's defeat in their annual match against Oxford. The results of the Linares super-tournament must have left Garry...

A first prize of £30 and a bottle of Graham's Six Grapes Port for the first correct solution opened on 6 April, with two runners-up prizes of £20 (or, for UK solvers, the...

You are invited to take the first line or two of a nursery rhyme and add a maximum of 12 fresh, thoroughly untraditional lines. Entries to 'Competition No. 2028' by 2 April.

Dear Mary. . . Q. I work in the entertainment business and I am often 'invited' to performances of fringe plays in which my colleagues are appearing, It goes without saying...

Who cares any more? Simon Barnes PERHAPS in the end it comes down to the shape of the ball. A ball is a sphere, a kind of perfection. To make a ball into an oval shape is an...