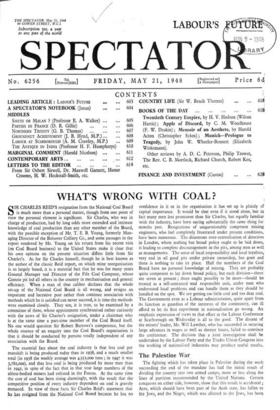 S IR CHARLES REID'S resignation from the National Coal Board is much more than a personal matter, though from one point of view the personal element is significant. Sir Charles,...

The fighting which has taken place in Palestine during the week succeeding the end of the mandate has had the initial result of dividing the country into two armed camps, more...

The appearance of the Spens Committee's report on the remunera- tion of dentists is a reminder that the report of the other Spens Committee on the important question of the...

Mr. Bevan Off the Rails

Mr. Bevan, like Mr. Shinwell, regularly lets his tongue run away with him when he gets on a public platform. Nothing could be more grotesquely inept than his objurgations on the...

Demons from Down Under

If farmers have not yet begun to pray for rain, the desirability of doing so must at least have suggested itself to some of our cricketers. To speak of the Australian team as a...

Nothing could well be more unsatisfactory than the aimless interchanges of the past week between Washington and Moscow. As to the first of them, between General Bedell-Smith and...

I T is not recorded that anyone at Scarborough this week said that the British Labour Party was at the cross-roads. At this party conference, as at all party conferences, the...

It would not be going too far to say that

General Gordon is more in the public eye today than he was during most of his lifetime. The future of his statue is being discussed daily in the papers and the Ministry of...

It is a tragic irony that Baffy Dugdale, fated to

see the Promised Land but not to enter therein, should have died on the very day on which the new State of Israel was proclaimed, for there was, I suppose, no more passionate...

The Libel Committee Marathon is beginning to attract public interest.

The official name of the body in question is, I believe, the Committee on Changes in the Law of Defamation, and it has been sitting, under the chairmanship of Lord Porter, since...

As I rather expected, my reference to the paucity of

I am not surprised that Mr. E. M. Forster has

resigned from the National Council of Civil Liberties. I shall only be surprised if his resignation is not followed by others. This body has been moving visibly to the Left for...

How will Sir Charles Reid spend the leisure to which

he has con- demned himself ? I should think watching open-cast mining, for it is impossible to imagine him away from coal. He has had more than fifty years of itâin the Fife...

By PROFESSOR E. A. WALKER* N EXT Wednesday the European minority of South Africa's population and those few non-Europeans who also enjoy the full parliamentary franchise are to...

By D. R. GILLIE F RANCE was declared a nation one and indivisible when she entered upon the last century and a half of her history, a period whose principle of unity is its own...

By G. B. THOMAS T HERE is a general impression that some new move towards an extension of the Western alliance is now imminent. When Mr. Bevin told the House of Commons about...

By J. B. HYND, M.P. T HE warnings that have been given concerning the world food- supply position are sufficiently serious to indicate the need for taking forthwith every...

By A. M. CRAWLEY, M.P. A NOTICE in the lift of my hotel asking guests to bring to the attention of the management any member of the staff who served them well, and adding as an...

THE ANTIQUE IN INDIA

By PROFESSOR H. F. HUMPHREYS () NE of the principal attractions of the Indian countryside is the unique series of pictures it provides of manners and customs, which, if they...

By HAROLD NICOLSON S OME years ago I wrote for the Oxford University Press a small handbook or manual on diplomacy. My main contention was that of the many qualities which the...

THE THEATRE All My Sons." By Arthur Miller. (Lyric, Hammersmith.) DURING the war Joe Keller allowed a batch of defective cylinder heads to be incorporated in the aircraft...

MUSSORGSKY'S Boris Godunov and Verdi's Requiem both present difficult problems of style and interpretation for English singers, and I am most unwilling to cavil at the Covent...

POEM I WATCHED where the tall trees shook At the

shock of the wind. Whenever the gales came I made my way to the blind, High trees, and watched them shake With only their roots for check. On a day of hollow darkness, Like a...

THE most interesting-looking of recent records is the complete recording of Brahms' German Requiem by the Viennese Phil- harmonic Orchestra, the chorus of the Musikfreunde ,...

ART IT is something of a commentary upon the art

life of London that the open-air exhibition of sculpture in Battersea Park should have to be hailed as an imaginative novelty. My first reaction was, " Why on earth haven't we...

THE HAGUE AND LAKE SUCCESS

SIR,â" The need today is to think continentally." This phrase of yours seems to me incompatible with the rest of your wise and welcome leading article on The Hague and Lake...

"THE BRIGHT YEARS" Sta,âThe sense of Miss Dymond's letter is shrouded in mystery. Are we to understand that I should not have written my autobiography, or that, having done...

SIR,âI am told that a report in Svenska Dagbladet of my article in last week's issue .of The Spectator has given offence to many people, and has provoked a number of...

SIR,âI read with great interest Mr. Peter Fleming's account of the Hague Congress. may I add a few remarks on another aspect of the Congress ? The Congress in its proceedings,...

PARTITION AND THE CROWN

SIRS Mr. Rawle Knox does not think that allegiance to the Crown is now a fundamental issue between the North and the South. I know the people of Ulster. Today their loyalty to...

Snt,âYour correspondent, Mr. J. C. Levine, writing about the expected increase in the numbers of patients to be attended by doctors after July 5th, ends with the statement,...

Sta,âWhile appreciating the finer points of Mr. Harold Nicolson's Marginal Comment on the subject of the interchange of French and British travellers (apropos " The English in...

feel that many people will raise eyebrows when they read about the " poor whites of Australia " in Mr. Robin King's review of The Harp inâthe South in your issue of May 14th....

Ornithologists in these days try to be very scientific, and all sorts of statistics are being collected. The latest is an attempt to analyse " the dawn chorus " so called. On a...

Sta,âMany of your readers will perhaps be aware of the work in the field of cultural and reconstructional co-operation which has, for nearly thirty years, been carried out by...

An old humorist of a politician used to say when the Monroe Doctrine was in question that he had a Monroe Doctrine for us, to wit, that "all islands are British." A naturalist...

WHITSUNTIDE coincided with absolutely the most lovely period of scenic beauty. Housman has given, in his ingenious but ardent verse, a certain supremacy to the wild cherry, but...

THE FIRST ALPHABET Sia,âI should be much obliged if you

In the Garden A shrub that has flourished beyond its

wont is Viburnum rhitido- phyllum, which is usually regarded as "rum" rather than beautiful. This spring it is undoubtedly splendid, and in any case the queer shape and...

Local weather prognostics begin to lose their potency. Even the engrooved prophet has been heard to announce: "The six o'clock do say â." A sad affair, but faith in omens has...

SIR,âIn your article, Western Unity (May 7th), you say that " we emphatically " do not like General Franco. May one ask who are the " we" ? Some of us, myself included, quite...

SIR,âWill you please restrain Janus from starting a publicity campaign on our behalf ? The charm of our county is chiefly due to the fact that it is unspoilt and unexploited....

The Commonwealth and Peace MORE than twenty years ago Sir Alfred Zimmern wrote an instruc- tive and suggestive book entitled The Third British Empire. Much has happened since...

Apple of Discord. By C. M. Woodhouse. (Hutchinson. 21s.) Tins is the most important book that has appeared about Greece and the impact of events in that country upon...

The Mirage of Peace

MunichâPrologue to Tragedy. By John W. Wheeler-Bennett. (Macmillan. 25s.) THE moment is ripe for the publication of this eagerly awaited book from so authoritative a pen. It...

Memoir of an Aesthete. By Harold Acton. (Methuen. 21s.) No one who was at Oxford University in the mid-'twenties needs to be introduced to Harold Acton, the most formidable...

Leon Bloy : Pilgrim of the Absolute. A Selection of his writings, edited by Raissa Maritain, with an introduction by Jacques Maritain. (Eyre and Spottiswoode. 18s.) BLOT was a...

Richer by Asia. By Edmond Taylor. (Secker and Warburg. 16s.) MR. EDMOND TAYLOR was for two and a half years one of the chief representatives of the American " Office of...

The Architectural Settin g of An g lican Worship. By G. W. O. Addleshaw and Frederick Etchells. (Faber and Faber. 25s.) CHURCHES have remained among the few monumental buildings...

Mount Ida. By Monk Gibbon. (Cape. 18s. ) MR. Grimort's book does not tell much of the circumstantial matters of his life. It is selective â¢ and it has selected those moments...

THREE of these booksâMr. Sender's, Miss Alexander's and Mr. Desani'sâare extremely ambitious. There is even a sort of tepid ambition about Miss Stern's, so that this might...

Coventry's Heritage. By Levi Fox. (" The Coventry Evening Tele- graph." 6s.) DEFOE, visiting Coventry at the beginning of the eighteenth century, said that, with its protruding...

[A Book Token for one guinea will be awarded to the sender of the first correct solution of this week's crossword to be opened after noon on Tuesday week yune 1st. Envelopes...

SOLUTION TO CROSSWORD No. 476

EDITIONS of Professor Robertson's minor classic have been appearing regularly

for twenty-five years now, and there would be no exceptional reason for noticing this, the seventeenth, but for the fact that it con- tains two new chapters. These are headed...

THIS is not a critical work but a piece of

professional journalism, a guide-book to recent English literature written apparently for foreignersâeither to English or to literature. There are brief chapters on Forster,...

FINANC1 AND INVESTMENT By CUSTOS JUST as City markets were

preparing to resign themselves to a long spell of inactivity and drifting share prices, Wall Street, always liable to spring surprises, has staged a remarkable recovery. On the...