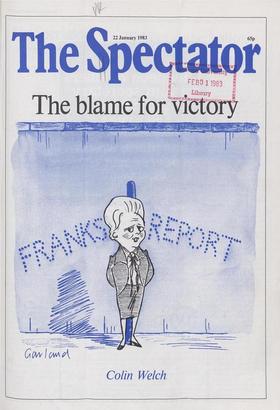 Biting on the ballot

M ost people nowadays think that it was rather ridiculous of their 16th-century ancestors to kill one another over the exact significance of a piece of bread used in church....

The blame for victory Colin Welch T here may be in Franks more criticism of Mrs Thatcher, politicians and civil ser- vants than any of us, as I write, wholly realise. Lord...

M rs Thatcher came over rather well from the Falklands (happy in the knowledge that Lord Franks had exonerat- ed her over last year's invasion by Argen- tina). It seems a little...

Murray Sayle Woy Woy, New South Wales Overshadowing everything in Australia V at the moment is the drought, news of which has finally penetrated from the out- back to the big...

Nicholas von Hoffman Washington T he firing of arms controller Eugene Rostow was what the newspaper editorial writers needed to pronounce the Reagan Administration an official...

Nuclear waste down under

James Hughes-Onslow nne thing at least has been made quite V clear by the protesters of Greenham and Sizewell: the so-called nuclear debate has so many complex and dangerous...

A very formidable strike is occurring on the Caledonian Railway. The men allege that they are worked to death, be- ing frequently kept on duty eighteen and twenty hours at a...

Death of an idealist

Sam White Paris W ith the recent death of Louis Aragon the French Communist Party has lost the last of the many intellectuals who once adorned it like laurels on a proletarian...

By any other name

Andrew Brown Uddevalla, Sweden T he morning's post brought an insurance policy addressed to `Amla Bomn', and a brochure from the Ministry of Justice to explain the new law on...

Christopher Fildes rr he Mansion House was a sea of white .I. ties. On the further coast, like the mut- ter of distant surf, Sir Geoffrey Howe was speaking. Then all at once a...

Can the train take the strain?

Ian Waller is hard to say who has been more dis- imayed by the Serpell report: Sir Peter Parker, looking for a politically acceptable 20-year strategy for the railways, or the...

Richard West W riting last month from Johannes- burg, I mentioned the then improbable-sounding rumour that South Africa might have recruited a tour of cricketers from the West...

Alan Gibson T he England side in Australia did not, I think, do too badly in the Tests, though halfway through the series they were being as heavily castigated by the English...

It passeth all understanding

Peter Mullen D adio Four told us about a Baptist 1.Xminister who lay on a bed of nails for six days. On the seventh day he rested. I can beat that: I have served as a parson in...

Yuri the Pope-killer Paul Johnson Th e really big news story of 1983, I be- lieve, is going to be the involvement of Yuri Andropov, the Soviet boss, in the at- tempted...

Sir: I have taken no part in the controversy over

Lord Ravensdale's offensive book about his father, as I regard this as a per- sonal and family matter. However, as Sir Oswald Mosley's secretary for many years (up to the day of...

Defending Mosley Sir: I will not weary your readers with Mr Ian Waller's numerous errors of fact (most of which could have been avoided by a glance at a reference book) in his...

Sir: In my piece from China dated 4 December, trying to describe the sexual electricity evidently crackling in the photographs of the late Chairman Mao with his third wife,...

Sir: I gather from last week's Spectator that You have a poor opinion of Mr Michael Heseltine. May I put in one good word for him? At least he stopped the planting of conifers...

Sir: Colin Welch's outburst against the Peace Movement (1 January) is, sadly, typical of the way our debates about defence and security are conducted. His own words do not...

Sir: A. N. Wilson's review of Twenty Years at St Hilary (8 January) gives us a deeply perceptive account of why we now find ourselves with many ugly churches, pale ec-...

Sir: I do not wish to enter into a debate with Paul Johnson (15 January) on the respec- tive merits or demerits of polysyllables and monosyllables. I am sure as a contributor to...

Sir: We can and must 'have it both ways' (pace

A. S. Hull, Letters, 15 January). Nuclear bombs are illogical weapons, useless if used and effective if unused, reflecting some of the illogic of human nature itself. CND would...

Sir: Sure, ok, I did write those words that Paul Johnson teased out of my Guardian book review (15 January). Next time, for the benefit of Spectator columnists, I'll have them...

Everyone his own Dizzy Alan Watkins Disraeli Sarah Bradford (Weiden feld £14.95) israeli is the extreme example of the 1...1 tendency of the Conservatives to choose queer fish...

Peter Quennell The Life of John Milton A.N. Wilson (Oxford University Press £9.95) L ondon, during the latter half of the 17th century, was much visited by foreign tourists;...

Peter Levi The Writings of Evelyn Waugh Ian Littlewood (Blackwell £12.50) E velyn Waugh's prose style is humorous, lucid, biting and very modern. It is not at all easy to...

P.J. Kavanagh I you think of the happiness of the old Matisse, painting his lovely colours and lovely girls, and compare this with the misery and malice that disfigured (we are...

Brutalities Peter Ackroyd Vol ('15', Lumiere Cinema, St Martin's Lane) S ome of the critical success of this film seems to have come from the personal circumstances of its...

Victorian victories Gavin Stamp ( -- , % f all the causes which brin g people V to g ether in an association, surely one of the noblest is the desire to preserve old buildin...

Serious matters Maureen Owen 'There is something tragic in the way BBC I radio has struggled to achieve a posi- tion of high esteem in the Eighties, only to decide to throw it...

Half-baked Richard Ingrams B reakfast television, which made its J-. 0 debut on Monday, is something for which there is no demand. The BBC are do- ing it because they want to...

Open secrets Taki New York w hat would you think of a movie that had the President of the United States taking the waters in a Southern spa on a late autumn day in 1941, when...

Eva Jeffrey Bernard va Johansen died last week in a typically 1.--.1extravagant, sad and infuriating way; drunk in bed with a cigarette and, like what ever little money she...

Who are you? Patrick Marnham WW ith the publication this week of a report by Market & Opinion Research International, light is shed on one of the great mysteries of the day:...

Jaspistos reports: Competitors were asked for an imaginary letter to the Times with a typically fruity and nutty flavour. 'One is perturbed by the disappearance from your...

No. 1253: Hail or farewell Set by Jaspistos: Now that breakfast TV is here, it is time either to bid it a warm welcome or heartily wish it goodbye. You are invited to write a...

A pr'ze of ten pounds will be awarded for the first correct solution opened on 7 February. Entries to: Crossword 591, The Spec ator, 56 Doughty Street, London WC1N 2LL. 1 9...

Menagerie Raymond Keene T here was an enthusiastic and ingenious response to the Christmas Quiz. Some of the questions were a matter of knowledge (or research), but others...

T wo detective constables, John Jardine and Peter Finch, were charged, and remanded' on bail, in connection with the 'tragic case of mistaken identity' which resulted in the...