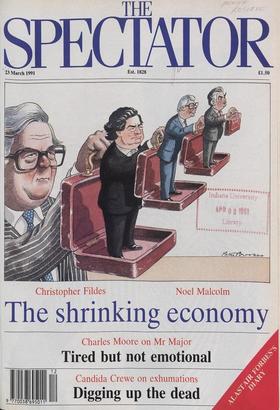 'The more this goes on, Lord Lane, the more convinced I become of your innocence.' I n his first Budget Mr Norman Lamont raised value added tax by 2.5 per cent, to pay for a...

ALASTAIR FORBES I must say I found it impossible not to feel twinges of sympathy for Lady Thatch- er when reading of her round-the-clock bleating in America about the pains she...

Mr Major shows the tired face of democracy CHARLES MOORE T he press decided at the weekend that Mr Major is tired and not feeling well, and Mrs Major confirmed it. This was an...

ALL SHIPSHAPE AND TOPSY-TURVY Noel Malcolm laments Lamont's neglect of the working-class Tories 'MANY honourable Members have press- ed the case for helping two specific...

LET'S HEAR IT FOR SOCKS AND SHARES Christopher Fildes likes a Budget for business's new owners THIS country is still in business, but watching the House of Commons you would...

NOTHING SO SIMPLE AS AN ANSWER

THE ROAD TO JERUSALEM

John Simpson doubts that a Middle Eastern settlement is even possible FOR A place so numinous, it is remark- ably unimpressive: a metal bridge, rickety and small, whose unfixed...

Murray Sayle on the long Asian pedigree of a short Gulf war Tokyo SOME very powerful names were invoked before, during and especially after the Gulf war, now so victoriously...

The Richard Dimbleby prizewinner is no stranger to manipulation, argues Derek Tonkin PERHAPS no television award has aroused quite so much controversy as the decision by the...

The Court of Appeal on Thursday gave a most important decision. Mr. Jack- son, of Clitheroe, had vainly urged his wife to live with him, and, after obtain- ing a decree for...

Zimbabwe's policy of killing elephants benefits both animals and people, Jonathan Manthorpe reports Harare THE groundsmen have done splendid work. There is no longer any sign...

THE YEARS WITH JENNIFER

Vicki Woods recalls her time with the eccentric social chronicler, Betty Kenward I ALWAYS thought Mrs Betty Kenward would die in harness on Ladies' Day, but there you are. She...

Candida Crewe fears there is no peace for the buried CREMATION or burial — which it is to be? The question concerns us all, and is difficult to resolve. Take cremation. You...

persis • t • • IF THE poor in spirit ever inherit the earth, some of my patients will be the lords of creation. At the moment, howev- er, they seem to me more like sheep, whose...

HITTING BELOW THE WHITEHALL BELT

The press: Paul Johnson deplores ill-informed attacks on a great public servant ONE OF the most unpleasant aspects of the media campaign against Margaret Thatcher was the...

Sir: Having written the leading article (`The brainless drain', 23 February) to which A. R. King (Letters, 2 March) took exception. I wish to rebut his points. First, I am not a...

Sir: I am sorry Virginia Utley (`Jury in the dock', 23 February) has despaired of the jury system but can only say this conflicts markedly with my own experience. Having done...

Sir: Your report on India, 'Thuggery rules', by William Dalrymple (8 December 1990) has caught up with me only now. The Indian political situation is farcical enough in all...

Sir: I have no doubt that Roger Shaw (Letters, 16 March) speaks Spanish fluent- ly; but is it not he, and not Edith Gross- man, who has boobed? In his assertion that the Spanish...

Sir: HM Treasury is correct in its assertion that, 'Legal tender is a specialised legal concept with little practical significance for the acceptability of a currency.' Tim...

Sir: I am delighted that Craig Brown (Diary, 2 March) has taken up a cause long dear to my heart, the red uctio ad absurd urn of the epithet 'cowardly' to denigrate actions of...

Sir: The Australian embassy in Paris was designed by my father, Harry Seidler, who is, appropriately, Australian and not by Marcel Breuer as stated by Alan Powers (Arts, 23...

Sir: Mr Simpson's sympathetic article 'Not just the Maxim gun' (9 March), is marred in one respect. I doubt if he can have read 'The Modern Traveller' in whole or in part. He...

Sir: I have read Charles Moore's percep- tive article (Another voice, 9 March) on trends in the Anglican Church with the greatest interest. Their resemblance to the...

How noble in reason Colin Welch THE HOLY FOX: A BIOGRAPHY OF LORD HALIFAX by Andrew Roberts Weidenfeld & Nicolson, £25, pp. 348 h ose who recall the Thirties will retain a...

When can his glory fade?

Around My Stony Cradle

Illyes did not like Budapest — of course, he lived in Budapest at the time and not where he said the worthwhile people lived. For my part, cruisin g these streets some fifty...

Only the aborigines are original

Francis King FLYING HERO CLASS by Thomas Keneally Hodder & Stoughton, £13.95, pp. 224 H ijacking is now a commonplace, not merely as an item of news but also as a theme for...

J.G. Links h e railways penetrated into every cor- ner of the Victorian world, concludes Professor Simmons. He has been writing about them for 25 years and, his publishers...

Andrew Clifford THE MARKET BELL by T.F. Powys The bynmill Press, £14.95, pp. 322 R eading a dead author's unpublished novel offers an experience akin to that one sometimes has...

When the singing has to stop

First novels, modern rather than new

Celestria Noel NEWS FROM A FOREIGN COUNTRY CAME by Alberto Manguel Harper Collins, £13.99, pp. 435 A HOME AT THE END OF THE WORLD by Michael Cunningham Hamish Hamilton, £13.99,...

Correction In Stephen Spender's review last week, it was not

clear from the layout of the quo- tation that Robert Fagles's translation of the Iliad was in verse. We apologise to the author and the reviewer.

We children had the freedom of the house, Wandered from room to room, at home in each, And felt no hiding place was out of reach; Fiercely awake, and yet oblivious; Till each of...

Rhyme is the rock

So there need not be a reason for this And neither did it ask for language, But I am led by something through the grass To where it stands by a gap in the hedge. It could not...

Penny wise Alistair McAlpine A quick look through the previews for March and February issued by Sotheby's and Christie's and it becomes very clear that Sotheby's are rather...

Starry night Martyn Harris T wo hours into The British Academy Awards (BBC 1, 8.15 p.m., Sunday) Billy Connolly in Los Angeles announced, rather desperately, that he was...

Crowning glory Taki admit to being rather flattered at being compared to the Queen in last week's Spectator Diary. The only difference being, of course, that I write my own...

Turn that baby down Jeffrey Bernard I n the strange game of musical chairs that we play here in West Hampstead the new tenant upstairs who has replaced the great micturator...

Puppy love Zenga Longmore I f I were asked to sum up my week with a single word, that word would undoubtedly have to be 'doggie'. Omalara has become obsessed with a...

recession, but I keep getting telephone calls from people called Kirsty asking if I'd consider buying a new kitchen. The answer to unsolicited sales calls is to try to sell the...

Distinguished drink Jaspistos CI ' VAS REGA L 12 YEAR OLD SCOTCH WHISKY iiu I n Competition No. 1668 you were in- vited to write a poem celebrating the sharing of a drink with...

Ivanchuk the Terrible Raymond Keene V assily Ivanchuk, the 22-year - old Muscovite, has clearly and convincingly won what has been billed by the Spanish organisers as the...