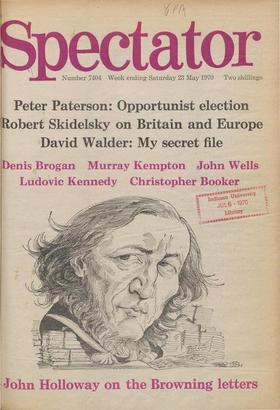 The Ted and Harold show?

It is. of course, a relief that the balloon which has already been inflated by so much hot air is at last released, airborne and ascending. And a week in which 0overnment,...

The opportunist election PETER PATERSON A nagging feeling remains that Harold might have miscalculated, stampeded by the opinion polls and the press into a June election for...

Nine days in May MURRAY KEMPTON Washington—Mr Nixon has gone to garrison at Key Biscayne, in Florida, leaving only a rearguard to defend him against a Senate apparently...

A word from Sir Alec LUDOVIC KENNEDY To accuse others of faults from which one suffers oneself is one of the oldest of human ploys, and politicians are as prone to it as...

The nature of Britain's dilemma ROBERT SKIDELSKY Britain is part of Europe and can no more ignore what happens there than we could in the past. No doubt had we been in a posi-...

My secret file DAVID WALDER Somehow or other all that range of activities from espionage to its respectable but distant relation, diplomacy, manages to stay with us, both in...

From the 'Spectator', 21 May 1870—In a dis- cussion on Vagrancy raised by Dr. Brewer, Mr. Goschen made an impressive as well as an amus- ing speech about the inmates of the...

J. W. M. THOMPSON I have always found that (contrary to the im- pression they are currently trying to create) most experienced politicians seem to dislike electioneering...

Taylor's law BILL GRUNDY After intensive investigations, I am now in a position to reveal a hitherto unsuspected connection between a certain stage in the career of a...

CHRISTOPHER HOLLIS Mr Michael Stewart was recently shouted down at the Oxford Union. In 1929 Mr Stewart (then himself an undergraduate) interrupted a debate in which Mr Osbert...

Getting a move on LESLIE ADRIAN A team of furniture removers trooped re- spectfully into a New York apartment on Fifth Avenue. They worked for three days, packing the...

This sporting life GEORGE GALE It was very much against both my better judgment and my notions of self-respect that four years ago I found myself, quite willy-nilly, hooked...

BOOKS The Brownings through their letters

JOHN HOLLOWAY Elizabeth Barrett was already known as a leading 'poetess' when, in 1839, a second bout of tuberculosis (undiagnosed just as the first had been years before)...

EDMUND W. GELBERT Life in Brighton Clifford Musgrave (Faber I20s) William Cobbett, writing in 1832, described Brighton as 'certainly surpassing in beauty all other towns in the...

TREVOR GROVE The Reality of Monarchy Andrew Duncan (Heinemann 36s) The ceremonial officer of the Treasury used to be British Boy Chess Champion in 1923; Lord Cobbold, the Lord...

CHRISTOPHER BOOKER The Sacred Mushroom and the Cross John M. Allegro (Hodder and Stoughton 633) A few years ago, Mr Allegro, author of a best-selling paperback on the Dead Sea...

J. W. M. THOMPSON Gilbert White and his Selborne Anthony Rye (Kimber 70s) Attachment to places has always been a precious spring to fertilise literature, and the Rev Gilbert...

PENELOPE HOUSTON To admit to enjoying the Cannes Film Festival is rather like admitting to enjoying Christmas. It's altogether too much, and some of what it's too much of...

Yesterday's news MICHAEL FFOLKES Bang on the stroke of five we were urged vigorously into the street from the exhibition at the National Portrait Gallery, 'Drawn and Quartered...

Visitors in the land of Ying HILARY SPURLING `Pu-lai-tun is a place famous for its beauty. It is in Europe, on the coast of the land of Ying. It lies about 160 leagues south...

Bright young things CLEMENT CRISP For comment upon the most thrilling danc- ing recently I refer you to Hilary Spurling's article on the Noh Theatre in Brighton. My task is to...

MONEY The end of the equity cult?

NICHOLAS DAVENPORT 'It is good to know from you,' a reader of this column writes to me, 'that this is not the end of capitalism but it would be more useful to me to know...

The abuse of television

Sir: I'm surprised that George Gale (2 May) should show concern over the political affiliations of TV political interviewers. While the majority of this small band are...

JOHN BULL I find that I have mentioned the crisis which envelops Investors Overseas Services (los) in these columns every week for a month now. Yet I must return to the...

Sir: Your legal correspondent, Mr Cline, in his interesting article on 2 May, envisages the possibility of demonstrators damaging cricket pitches during the forthcoming South...

Sir: Colonel H. R. Pelly (Letters, 25 April) rightly criticised Mr Heath for not mention- ing the problems caused by the growth of population in this country, but, with respect,...

Who teaches the teachers?

Sir: Many people will share Rhodes Boyson's concern (9 May) about the present state of teacher training. Certainly there is a need for greater realism so that trainees learn far...

Red hands across the sea

Sir: Mr Quintin Hogg's fair-minded and generous assessment of the situation in Northern Ireland (25 April) is sufficiently serious to warrant further comment than that so far...

The dwarfs of Lime Grove

Sir: One is continually shocked by the humourless pomposity shown by members of the 'new establishment' when one of their sacred cows is subjected to criticism. Mrs Yvonne Brock...

Sir: I was interested in your Balliol College expert's note on Liege/Liege (Letters, 2 May), and looked up the city in Vol. XIV of the Encyclopaedia Britannica. The footnote...

Sir: It is refreshing and nice to those of us who are wholeheartedly anti-vivisection to see reasonable people like John Rowan Wilson saying to us: 'To sneer at them or write...

Sir: While thanking you for your friendly notice of my novel That Summer Long Ago (9 May), may I in the interests of fiction verisimilitude and of historical accuracy point out...

Sir: Either Peter Paterson (2 May) had his tongue very much in his cheek or he himself committed the interviewing sins he believes might exist among the polling organisa-...

Sir: In reply to Mr Skeffington-Lodge (Let- ters, 2 May), the vc is awarded by the monarch for gallantry by a British subject, regardless of where, why, or in what war, though...

Sir: Unlike your ill-natured correspondent A. S. Winder (Letters, 9 May), many of us in London greatly look forward to the all too infrequent, witty and outspoken contributions...

No. 606: Travellers' rest Borough councils and county councils, which have long done their best to get rid of 'travelling people', now have a statutory duty to provide sites...

Box on, lads JOHN WELLS With only a few short weeks to go before the Big Fight, writes Crispin Thugge, the Man with his Cauliflower Ear to the Can- vas. I confidently predict...