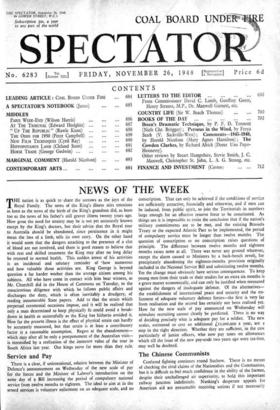 NEWS OF THE WEEK ,

Confused fighting continues round Suchow. There is no means of checking the rival claims of the Nationalists and the Communists, but it is difficult to feel much confidence in...

There is a clear, if unintentional, relation between the Minister of Defence's announcement on Wednesday of the new scale of pay for the forces and the Minister of Labour's...

Towards a Palestine Settlement

An agreed settlement between Arabs and Jews in Palestine has always been the object of the British Government, and it was only because, after many attempts, this became clearly...

By presenting a comprehensive memorandum on the Ruhr economy to Mr. Marshall and Mr. Hector McNeil in Paris last Saturday, M. Schuman, the French Foreign Minister, put the...

That the British four-year plan, or at least the expected situation at the end of it in 1952-3, should have been published in an American newspaper in Paris and not in a British...

Whatever may be thought about the merits of representative government in a country as vast and as primitive As the Sudan, there can be no dotibt that the general election which...

The Legal Aid and Advice Bill, the text of which became avail- able at the end of last week, follows in most, though not all, respects the recommendations of the Rushcliffe...

A FTER the high political controversy, the great speeches, the packed houses of last week, this week's business, though impor- tant, has been so far in a minor key. The general...

COAL BOARD UNDER FIRE

N OT long ago it was the custom for all statements by the Government on economic policy to begin with a recital of the difficulties created by the war and by what were usually...

It is not, I fancy, generally known, and it is

likely to cause some surprise, that any alien visiting this country can obtain free treatment —including the supply of dentures or spectacles—under the National Health Insurance...

Lord Samuel's advocacy of the institution of a Common Good

fund, to be raised through voluntary subscriptions and administered for "the common good" by wisely chosen; experienced and able trustees ought to set something moving. The idea...

T HE Sunday Times article on General Eisenhower's book has not created as much tumult as it might have. That, on the whole, is a good thing. Eisenhower was so conspicuously...

* * A little book I have just been reading

with much interest ought properly to be called "Ways with a Wife." Not that that would really do, for it is a serious legal work, and its actual, and rather misanthropic, title...

Flying, for those who like it, is an excellent way

of getting about, provided you are not in a hurry. Last week a writer not unknown to me went over to Paris for a few days. On the outward trip he was only a matter of an hour...

Meanwhile one story told towards the end of General Eisenhower's

book has a special personal interest at a moment when thoughts are so painfully concentrated on the physical consequences of the King's conscientious devotion to duty. In...

By WILSON HARRIS A FAIRLY protracted week-end, counting four full days—quite enough, some might say, to justify dogmatic verdicts on all the affairs of Paris, France and the...

By EDWARD HODGKIN T HE Moore Memorial Hall, where the Tribunal of Inquiry into Alleged Irregularities in Government Departments has its meetings, is on the first floor of...

By FtAWLE KNOX R EPUBLIC Abu!" These two words, written in greying white paint, have stood for years on a wall in the Dublin suburb of Ballsbridge, the now enfeebled heart of...

By PETER CAMPBELL CCW HO will win in 1950? "is not a question to which an answer will be given confidently until political forecasters, whether pollsters or intuitionists, have...

By CYRIL RAY T WO new films—one already being shown in London, one soon to be shown—are each the product of a new studio technique. Rope, made in Hollywood by Mr. Alfred...

By CLELAND SCOTT Nairobi. W HEN viewed in a zoo the hippopotamus appears as a hideous inert lump of flesh, and one wonders how he came by the name of "river horse." When you...

"The sound is forced, the notes are few " Said Blake ; the first four words are true. Not so the rest ; the poor reviewer Must sometimes wish the notes were fewer. EDWARD MARSH.

By HAROLD NICOLSON I WAS lecturing the other day to the senior boys of one of our 1 great public schools. I could ask for no more intelligent or appreciative audience ; and yet,...

THE THEATRE Miss Mabel. By R. C. Sherriff. (Duchess.) MR. SHERRIFF wins our confidence very quickly. There is nothing at all showy about his craftsmanship, but we are aware,...

THERE has probably never been a revue which was not

best described as "good in parts," and the frequent insipidities of Slings and Arrows are the price we have tp pay for seeing Miss Gingold at her very best. It is a stiffish...

THE week has been dominated by 'cello concertos. The Elgar concerto was played by Anthony Pini at the Royal Philharmonic Concert on the 17th and by Suggia at the St. Cecilia's...

WITH the exception of some drawings by Sick.ert and Augustus John which are to be seen at Messrs. Roland, Browse and Delbanco's (the Johns including a rnagnificent early...

STATE versus SCHOOL SIR,—The Headmaster of Tonbridge has stated the case against the new age limit for the General Certificate examination, but there is another point of view...

A PLAN FOR GERMANY

Stn,—The Nauheimer Kreis, a growing group of German politicians, industrialists and intellectuals of different parties, has worked out a plan for the solution of the German...

StR,—My letter on offences by women which you were good enough to print in The Spectator of September 17th last has brought me an interesi- ing mail-bag—letters from near and...

Stu,—Very well, I apologise. Mr. Williams does not advocate Socialism "by force" in so many words in his book, The Triple Challenge, even if it is implied. I note that he...

Sitt,—The latest Report to the Nation maintains the Government's un- broken record of illiteracy. Under the heading: "See how Positioning helps Productivity" there is a picture...

SIR,—May I ask why Mr. C. E. Vulliamy considered "Sparrow and Eagle" an appropriate title for his very unsympathetic review of The Essential Richard lefierlis in your issue of...

ISut,—Everyone who has lived in China tends to judge the Chinese in terms of his own experience and emotions. I might agree with much that Tony Gibson writes in his letter of...

SIR, —If it is an offence against professional comradeship to print articles on an anniversary too soon, the British Weekly has sinned over the Isaac Watts bicentenary more...

SIR,—I am gratified that Mr. W. E. Styler has read both my article and my book, but I am not confused. In my article I wrote that polls had their subsidiary uses ; in my book I...

in some editions of White's Selborne) would have run out of paper this year.. They found a few "indications oUspring " in November ; but -no evidence that cab compare in bulk...

Some architects, one of them tells me, still find a use for water diviners, and believe in their mystic art. The scientists, on the other hand, utterly condemn the belief, and...

Sfit,—Your leading article on The Widening Pact makes the case, and a conclusive case, for A ." defence group, conforming fully with the provi- sions of the Charter; which by...

Sta,—Lord Mancroft not unjustifiably accuses the Chinese in Malaya of maintaining too close a contact with China. But what about ,the British in Malaya? Do not their...

Some reader or other of The Spectator always knows the answer to a query: so it has proved with regard to the doggerel lines on "logs to burn." The best version appeared in...

Sm,—In his anxiety to make fun of the Dutch language your correspon- dent, Mr. G. Griffith, seems to have rushed in rather precipitately. Shakes- peare wrote " spirit " not...

Sta,—Last week Janus praised a railway sandwich, and The Observer attributed this remark to Mr. Wilson Harris. This confusion will be deplored by many readers of The Spectator,...

Neglected Peat A more or less new sort of land

reclamation'is,being urged on °us by the Danes who, front necessity during the war, burnt peat in place of coal. One Danish lecturer (quoted in the Estates Magazine) alleges...

WHY NOT A SUBSCRIPTION A TO "THE -SPECTATOR"?

Some gardeners have devoted years, amounting sornetimei to half a

lifetime, to adding qualities to a particular flower. 'The 'water lily, for example, owes everything to one Frenchman working on the most humble scale. Mr. Russell has recently...

Ibsen and the Stage ALTHOUGH innumerable bfographies of Ibsen have been written, there have been surprisingly few serious studies of his dramatic methods and his scenic...

A Lack of Balance

The Equilibriad. By William Sansom. Illustrated by Lucian Freud. (Hogarth Press. £1 Is.) MR. SANSOM'S hero Paul suffers from disequilibrium, which he enjoys and encourages...

Perseus in the Wind. By Freya Stark. (John Murray. 12s. 6d.) FOURTEEN years ago Freya Stark wrote a book called The Valleys of the Assassins, which seemed to me then and still...

The Cowden Clarkes. By Richard Altick. - (Oxford University Press. 18s.) COWDEN CLARICE is known to lovers of Keats as the schoolmaster who initiated him into the mystery of...

How We are Governed

IT would be too much to say that a novelist is limited by the human worth of his characters, but their stature is important. A genius who wrote always about moral pygmies would...

By CUSTOS THE Minister of Supply has now amplified his House of Common:, statement that he will give " sympathetic consideration" to plans for segregating iron and steel assets...

TO ENSURE REGULAR RECEIPT OF THE SPECTATOR

Leaders are urged to place a firm order with their newsagent or to take out a subscription. Newsagents cannot afford to take the risk of carrying stock, as unsold copies are...

THE SPECTATOR" CROSSWORD No. 505

Book Token for one guinea will be awarded to the sender of the firs: correct solution of this week's crossword to be opened after noon on Tuesday week December 7th. Envelopes...

SOLUTION TO CROSSWORD No. 503.