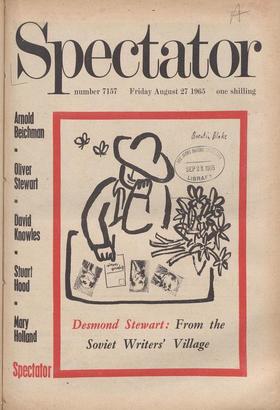 View from the Scillies

W E know exactly how Mr. Harold Wilson looks when he is on holiday in the Scilly Isles : how does the scene look to him from there? No doubt the economic outlook dominates his...

-- Portrait of the Weekâ As EVENTFUL, if not invigorating, week

for the country which (since the death of Sunday of Mr. Norman Dodds) is now ruled by the Labour party On a majority of two. The Ford Motor Company had its troubles again,...

Beyond the Concord By OLIVER STEWART A SHORT time ago members of the Royal Aero- nautical Society were asking one another what had gone wrong with the British aircraft...

A City of the Theatre SARAH GAINHAM writes: Tilla Durieux was eighty-five on August 18 . Has anyone in London ever heard of her? Yet she was the first Eliza Dolittle, in the...

Howard's End C HRISTOPHER BOOKER writes : The news that Anthony Howard is to leave the Sunday Times (after only eight months) to become the Observer's Washington correspon-...

The Wandering Scholars By R. T. BERRY T rTHEY are hardly a new phenomenon. We I know of them in the early Middle Ages, wandering from university to university. The cir- cuit...

YXOMATOSIS (see this week's leader) is in the news again. I find that expert opinion tends to support the view that 1965 may be the year in which the farmer's pest (and...

Boom This has been a troubled summer for manY sections

of the economy but at least it has been a bumper season for two of our national growth activities : the manufacture of noise and ni litter. Here at least productivity has...

Liner Trains It is bad news that the NUR have

rejected, even for a trial period, the introduction of liner freight trains. Clearly their opposition centres on the proposal of the British Railways Board that private road...

This week Clive Barnes bids us farewell on his Way to fresh woods and pastures new. A sad occasion for us, but it must be almost a unique tribute to a London critic to be...

T ailpiece b After his salvo earlier in this issue, Christopher

r oker has gone on holiday. In his absence, who a Â° You suppose will be contributing Â°lir commen- tar y on The Press? That's rightâRandolph. QUOODLIS

I see that in a story this week on the new nelo-Irish extradition treaty, Time describes the I s land of saints and scholars as 'only a three-hour :errs/ ride' away from...

The Larger Hope From ARNOLD BE1CHMAN A A POLITICAL journalist suddenly evidencing op- ..timisrn while his confreres are keening the GOttercliimmetung bluesâas here in South...

. Even if there is an exciting finish to the county cricket championship, it has been one long yawn this wet summer. No team has managed to win v e , en half its matches...

By CARYL BRAHMS PAI.ACE revolution can rarely be a happy or - edifying specthcle, but when the /rouble at the Royal Academy of Dramatic Art finally sub- sides,, it is to be...

We must allow substitutes; otherwise. the best players of a team are eliminated by the opposition who injure Mein,â Comment of Honduras Football Association .on the FIFA...

From the Soviet Writers' Village

By DE'SMOND STEWART p um more than churches build our western idea of a village, and, lacking a pub or a cafe, Pcridelkino, possessor of a fourteenth-century church, does not...

Playing the Riverside Pubs By DAVID ROGERS I N Wapping High Street a pigeon is uncon- cernedly pecking between the cobblestones. Some shafts of evening sun penetrate Limehouse...

SIR,âThe White Paper on immigration has been widely condemned for

the harsh new restrictions it proposes and for its lack of positive proposals to combat racial prejudice and discrimination. In this situation the work of the Campaign Against...

am a member of the Labour party and have, ever since I had a drink with him in Moscow at the time of the British Trade Fair, had a particularly soft spot for Mr. Wilson. I...

SIR,âAs Quoodlc was so generous in his reference to my modest part in devising the VSO idea. may I comment on the director's letter in your last issue? I could never have...

Sik,---As one of the radical correspondents with Pen already poised,

I am cheered by Mr. Hattersley's answer to my imputed question as to how his advocacy 'differs from the worst sort of racial P r opaganda.' The answer, says he, Is simple: the...

The Man Who Was Shakespeare

what* heroic doggedness Mr. Martin Seymour-Smith (August 20) clings to hi S belief that a few mis-spelt words in a book should be equated with, and crucified as, factual errors....

Art as Revelation By BRYAN ROBERTSON AN impressive show of recent works by IAMalcolm Hughes and Michael Pennie at the ICA should not be overlooked during these Metropolitan...

SIR,-I was most interested to read Leslie Adrian's article 'Imp and the Impossible.' I must point out, however, that the only difficulty that Volkswagen- werk AG experienced in...

ALMOST the only people not to know that the ,ft1964 Television Act gave Lord Hill real powers over programme schedules were the trio in Rediffusion's Three After Six. They...

By CLIVE BARNES W HAT can I write about? For here after six years I am saying farewell to these columns and, for that matter, this country. I could, I should and, duty being...

BOOKS The Making of Europe

By DAVID KNOWLES eF all the misnomers with which historians kihave labelled epochs of the past, none is more misleading than the ticket of 'The Dark Ages.' Originally applied...

FORD is not only a giant among modern English nOielists, but also he must be one of the most monumentally neglected of all writers. A few useful but gossipy books have been...

Under Pressure. The Writer in Society: Eastern Europe and the U.S.A. By A. Alvarez. THE god of the literary interview is Janus. For the interviewer must have two tongues and...

A Curtain of Ignorance. By Felix Greene. (Cape, 35s.) China in Crisis. By Sven Lindqvist. Translated by Sylvia Clayton. (Faber, 25s.) Sow: years ago I was sent, with the...

In the brass light of morning, fire along the . grass, The tide far out, turning, the wind at peace. The vivid sky stood open, a scene with nothing wrong: Sun was sun, stones...

The River-Watcher is a novel of violence and immense subtlety: it deals with kidnapping, revenge and death by drowningâthough its over- riding theme is the analysis of the...

That Petrine Cock By DAVID REES W HEN That Uncertain Feeling* was pub- lished ten years ago in August 1955 some of the reviewers were uneasy. After the fire- works of Lucky...

'The Whole Truth' About the Crisis By NICHOLAS DAVENPORT I T was a fine idea of Mr. Cecil King to devote six pages of the Daily Mirror over three holi- day days in August to...

By CUSTOS T DR announcement by ICI of a coming issue of Â£50 million 74 per cent unsecured loan stock at 984âthe largest financing operation, it is said, ever undertaken by a...

By LOTHBURY I N our last issue .was an extract of profits from Tunnel Portland Cement for the year to March 31, 1965. Trading results were slightly in excess of those of last...

Chicken a la Mood By LESLIE ADRIAN 114v caption of the year comes from Malcolm Newell's Mood and Atmo- sphere in Restaurants (Barrie and Rockliff, 42s.): 'Fig. 51 Tun of Port...

The Customs of the Country

By MARY HOLLAND WHEN you consider that they represent the state at its most unswervingly punitive it is remarkable that we don't resent the Customs more: both the office in...

By ALAN BRIEN There was a time when I was a subscriber but eventually its critics hounded me off the mailing list. I respected the way its editors fought to keep Greenwich...